Skip to content
Remember how i said we were planning to go back to South america at the end of 2016?
Well, I started getting quotes to fly our two motorbikes to Buenos Aires! 😳 I had quotes of £1,300 to £1,600 … Per bike…. One way……
So after consultation with the other half, we decided that the money could cover a lot of travel time instead!
So, where next? Why, Russia of course!
Below is a very rough idea of what I have in mind! But as always, we will remain very flexible. 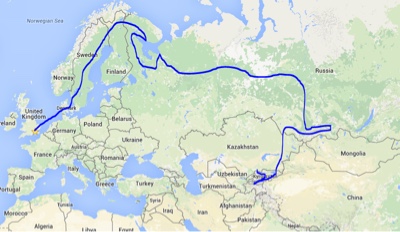 To be fair, i am not even sure that crossing Russia by the north route is at all possible. Most roads are winter roads, i.e. Frozen rivers…but i am keen to explore! Last year a guy in a 4×4 car tried but had to back track! So that should be interesting.
We will finish in Bishkek (Kyrgyzstan) where the bikes will return to Europe on a truck while we fly home. If Tajikistan is calm, we may attempt to ride and explore part of the Pamir… Things were quite volatile last year and the road was closed and tourists turned away.
And what bikes this time? Well, as you know the Hondas XR125 were perfect in term of weight, but too slow and underpowered. So… The hondas have been sold and we bought two other bikes. 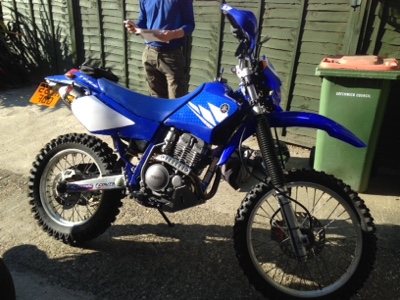 The first bike above was originally going to be for me… A TTR250, 2004, in mint condition. But i failed to lower it enough for me to ride it comfortably…. So this will be Alistair’s bike. He loves it!
For me? We got lucky and found a grey import, fresh from Japan: 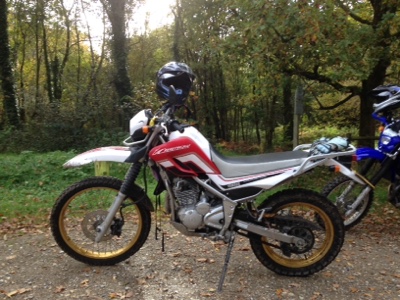 A beautiful 2009 yamaha XT250. Perfect dimensions for me! I love it!
Those bikes are amazing on dirt roads, water, mud….
So what are we up to? Preparing the trip!
I resumed my russian lessons with my excellent teacher Julia.
I am investigating for the border permits for the Altai and Tuva.
We are riding off road as often as we can, we joined our local TRF club.
I am spending hours on google earth trying to find tracks and generally trying to find trails and roads, especially for the famous and difficult Tuva Track!
And of course still working full time! We have to earn some money occasionally 😇
I will seek the russian business visas some time in February or march. We plan for now to leave around end of May early June, as we will be close to the arctic circle. Might be a bit chilly up there!
And of course we need to get the bikes ready, so lots of mods and work to get done… From bigger fuel tank to luggage rack, and lots of new parts before we leave.
So , about 6 1/2 months before departure and a fair amount of stuff to do.

Across the Altai (Siberia)