While in Astrakhan, we bought some tooth paste in a minimarket.

Look we found the display with soap, shampoo, tooth brushes and some tubes. You may think it must be, surely, toothpaste!
In the evening, I went  to brush my teeth, poured the paste  onto my brush. It did not feel right. No smell, strange texture, no taste. I hesitated and putsome on my fingers… The cream  was so sticky i could not get it off even with soap. I typed the name of the box into google translate bit no translation, although in roman characters it started by “spermi…… ”   Ewwwww! Did we buy spermicide by error?
The tube went straight to the bin!
Monday 12 th May – 243 miles – into Kazakhstan 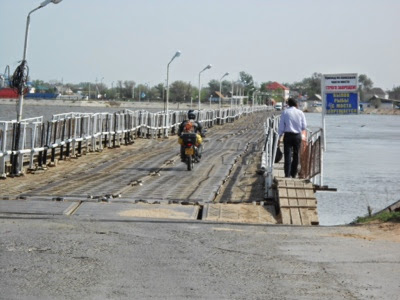 We tried to leave town early, but with the usual run around town to find the correct road, we were outof town around 10 only. Eventually we found the border. The crossingw as uncomplicated and we wereout of Russia and into Kazakhstan in a bit  more thanan  hour, including time to change some roubles into Tenge, and also to buy some insurance for the bikes. 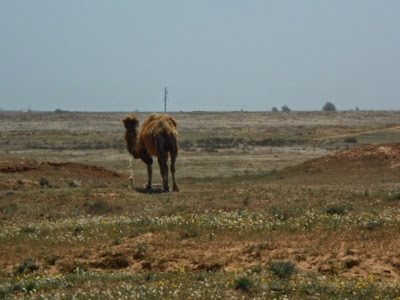 Our guide book was adamant that the police was very corrupt and would try to get bribes out of us. In  fact, most ingnored us. Few were curious and started to overtakeus and   drive next to us for a while, to have a good look! Maybe when they saw our dusty old bikes and battered dirty saddlebags, they thought “nah look like tramps, they don’t have money!”
In Kazakhstan, the scenery changed little by little into desert.we  saw our first asian camels ( with 2 humps!). 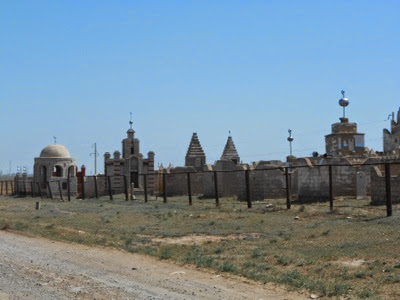 Kazkhs people were  very curious of the bikes. At a fuel pump, as we were to leave, one local turned up in an old battered bike with side car. We got talking and he asked where was the kick start. We said it  waselectric and   I demonstrated that by starting my  bike. Next thing i know the guy sits on it….. And go  for a ride with it! Not far but i was worried for a while! 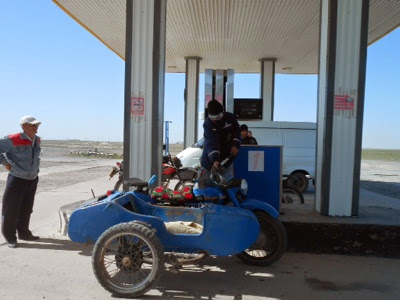 The road in Kazakhstan was a nightmare, in such bad condition  there were potholes everywhere, it was hard to avoid all of them and the bikes got quite a battering! Some sections were unsurfaced but not better!
After all afternoon of this, we arrived very late ( we lost another hour to time travel! Minus 4 hours to London time!) we arrived late in Atyrau, around 7:30 pm… If you work in oil and Gas, you may have business to do in Atyrau, else, the town is in the middle of the desert… 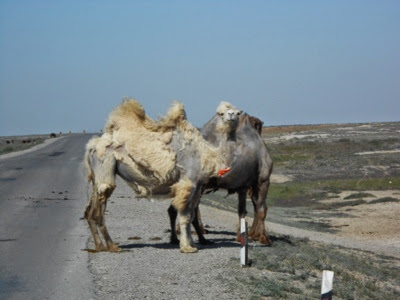 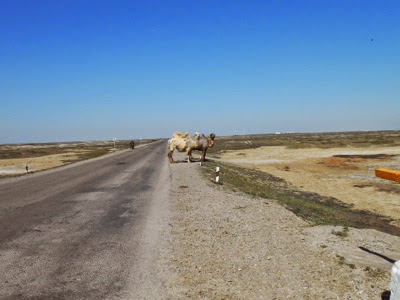 Tuesday 13th May – 286 miles – beyneu, Kazakhstan
We left Atyrau after the usual rund around town to find the correct road. The road out of Atyrau was in better condition but the wind was so violent, it was like my helmet was trying to get through my skull. 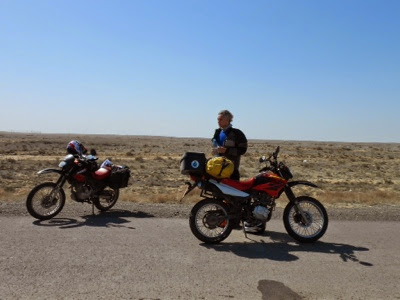 It was incredibly hard riding. Although originally we wanted to make it to Beyneu, we felt it was too far to ride in those conditions. There were a couple of villages showing on my map. We passed one, and a second… Nothing there for us to spend the night… We continued. 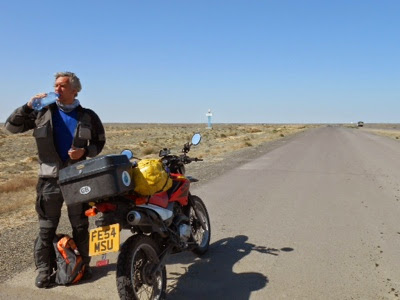 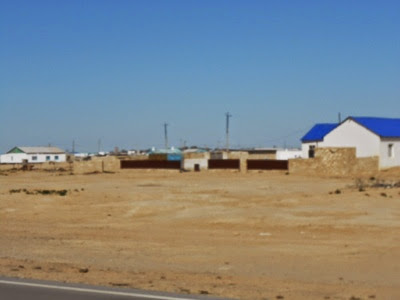 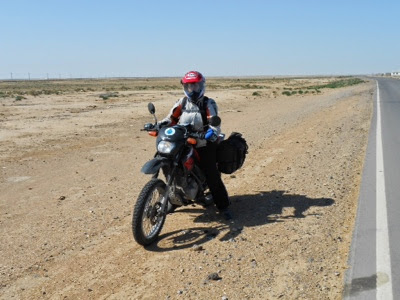 Eventually around 8 pm we got to Beyneu! We found the only hotel in town, wildly overpriced, but we   had no choice. Our room had no bathroom, so we had to use the communal showers and toilets.
I usually have no problem with that, except that the toilets were the ceramic hole on the ground variety! I hate them, they are unhygenic. As you  croutch to pee ( for women!) the urine rebound off the ceramic   Surface and get all over your shoes and legs.. Great if you wear shorts and flipflops! Back to the shower then ! Hurgh!
Late that evening, a motorcycle group tour (4 bikes and a 4 x 4 support vehicle) turned up, they were from moldovia.
Wednesday 14th of May – 162 miles, Uzbekistan
In the morning, as we packed our bikes, we met the moldovians, they were very friendly. They were goin the same way that us. So we left them there, sure to meet them at the border. We went to buy fuel and  extra fuel to carry, as we knew the next town in Uzbekistan would be about 300 miles. We then bought 3 bottles ofwater and   some food, as the Uzbek border crossing is notoriously slow!
We then got on our way. The wind was still very violent! 30 km before the border we got more fuel, and were overtaken by the moldovians. The road to the border was awful and then turned to dirt, sand and gravel!  We finally got to the border. Our moldovian friends saw us and waved us through. We skipped the  queue of cars and parked next to their bikes.
Now, one thing you must know about those borders control, there is a queue, and you have to get into the compound to start the process. Getting inside is therefore very important. Once the load of people in the compound is processed, they let in more vehicles… We were fast tracked and allowed into the compound when the gates opened again!
Then being processed out of Kazakhstan was fairly straightforward, again, not sure how, but with help of the moldovians we were processed ahead of the queue for passport controls! It took an hour!
Then we rode the short distance to the Uzbek border!
I will spare you the details, only that thanks to our new friends,we  got through in about 3 or 4 hours, jumping queues and being told by them what todo as   it is i possible to guess and no one to help!
Some locals get stuck there for several days! We met few days later some germans ina guided tour who spent 8 h there! So we were lucky!
Once into Uzbekistan, ourfriends left. As we got out, after changing some cash, we passed a small hut, and saw our friends again! The hut was selling insurance! We got some for our bikes.
Few miles later at a police check point we were asked for it!
The road was its usual awful surface with millions of potholes and sections of dirt. It was incredibly hot and windy, by then we had been all day at the border, so we were very tired and hungry! 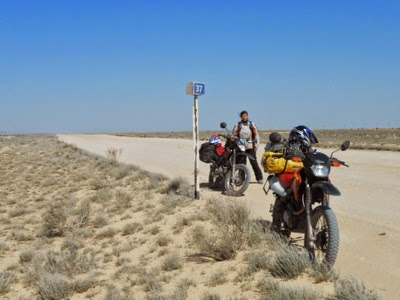 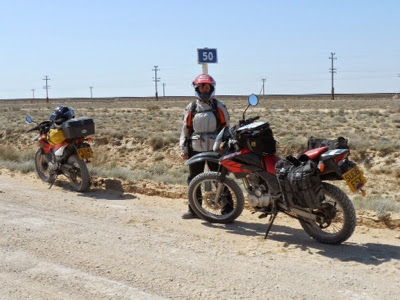 The next “town” was a good 200 miles away, too far to make it. We carried on as it was no point setting up camp early, and we had too little water left! That was true desert, straight road for 200 miles with not much…. Intense heat, we were drenched in sweat in our motorcycle gear with no hope of a shower! 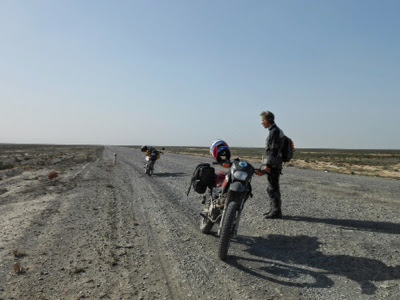 There was a spot in my map were we   hoped to find water. So we rode well into the evening. Just before the turning to a few houses, there was a police check point. They were not interested in our documents, only to take our picture! We asked if we could find accomadation and water in the village, but they told us no! However, they told us that 5 km down the road, there was a teahouse that was also a hotel, and we could find food and water! I could have kissed them! We got there by 8 pm and we saw the bikes of the moldovians!
We got a room with shower and dodgy plumbing but to us it was paradise, with food, water, and a shower!
To be continued….disaster and problems the next day!