We had a day rest in Gorno-Altaysk, doing some laundry ( as always) and having a small walk around town.
We were close to the Museum, which we visited last year with Vladimir and the gang. ( see  in this blog, July 2015 report about my Altai ride for details).
I had been in contact, for the last two months, with an Australian couple, travelling around the world. They had been ahead of us and had done a different route. They were arriving in town today,  so we went around,  to find a place for dinner.
Their hotel was rather far from the town centre, thanks to booking.com. This site has been awful as far as location of hotels in Russia, is concerned. Instead of their hotel being 500 metres from ours, it was several miles out!
They  arrived and we met at our hotel. From there, we walked into a nice newly opened grill bar.
The menu was not in English but the owner and chef, came out , and talked us through the menu, in excellent English. He was absolutely lovely, and could not do enough for us. I must say that the grilled squid was the best I have ever eaten! It was credibly tender and tasty!
We had a long discussion with Curt and Lynette, looking at maps and looking at itineraries. They were  going to Mongolia next. 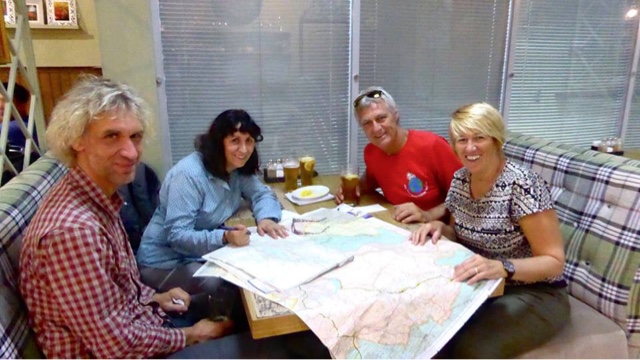 It was a great evening!
Day 45 – Tuesday 26 July – Manzherok – 40 kms
Registration done, we moved to Manzherok, at the Altai-Moto.ru base camp.
The house was full of people, all involved with the incoming Altai Enduro race that was happening at the weekend.
We were very happy to see Vladimir once again. We spent an amazing ten days, last year, riding with him and our friend Anton ( the same we went to see in Tomsk, if you follow!) around the Altai mountains .
Vladimir gave us a bear hug and we had tea and biscuits, after being shown our room. He had to ride out with his crew of professional enduro riders, as they had to go check and do some work on the place of the race. Vladimir, through his company Altai- Moto, is one of the main organiser of the rally, if I understand. So all the riders disappeared for most of the day.
We had a walk into town with Alistair. We remembered a place we ate a nice Plov, last year. We found it and had another Plov for lunch. 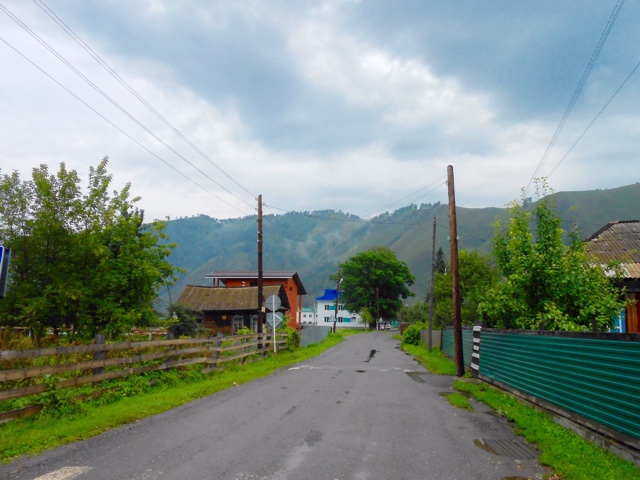 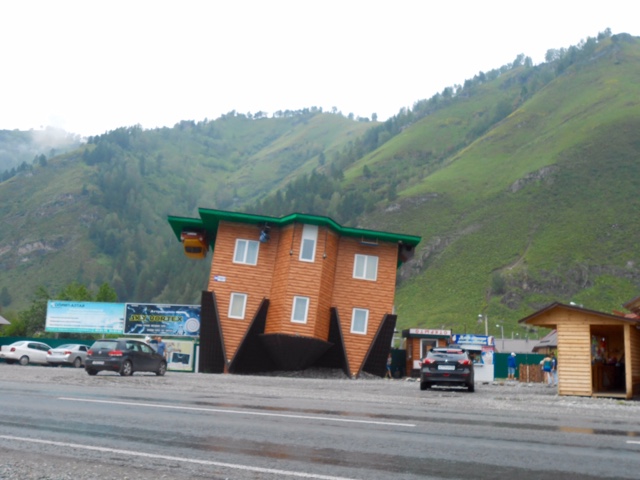 Lynette and Curt, still in Gorno-Altaysk,  were planning to visit the Altai-Moto house, in the afternoon, but with a massive storm coming, they decided to wait.
With lots of more people busy in the house, once the storm passed, we went for a walk with Dina and Sergey, two friends of Vladimir, helping with the event.
We had a lovely walk along the river. 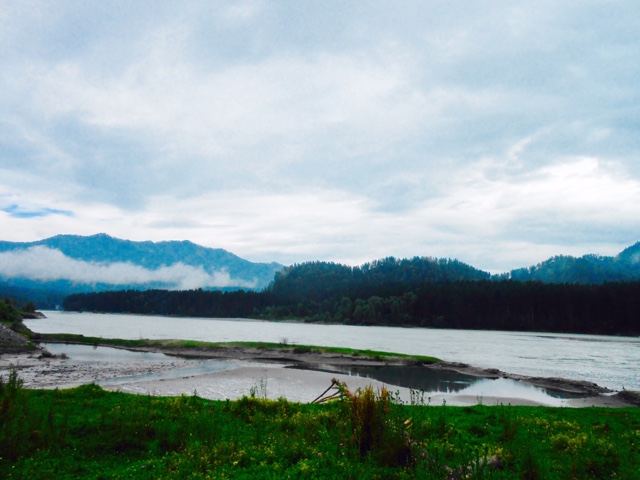 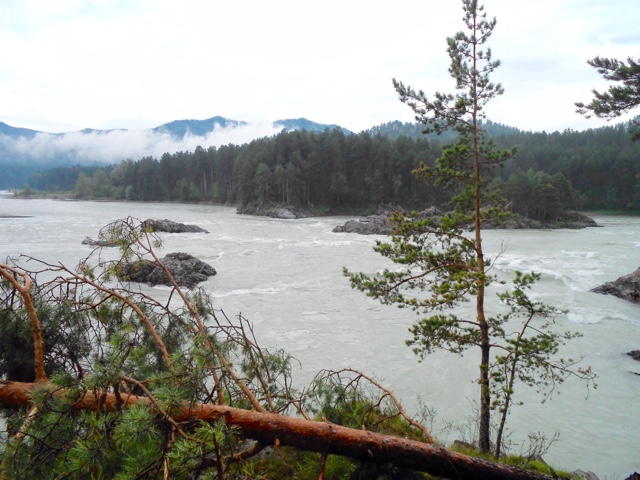 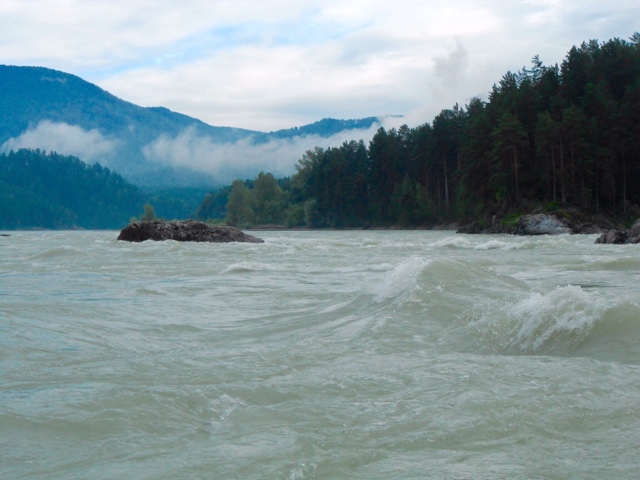 Back at the house, the riders were back, jet washing everything, their riding clothes , bikes, socks, boots…. They were totally covered in mud. Conditions for the race would be challenging!
Meanwhile, dinner was being prepared. A traditional Plov, on a wood fire, In the garden. 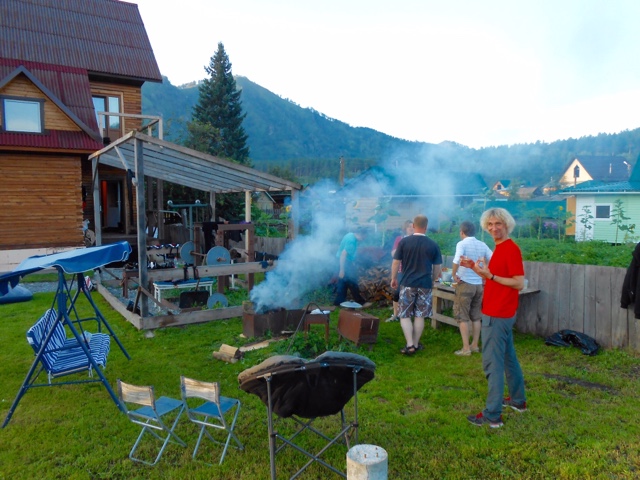 The chef also brought some tasty nibbles out, to eat while drinking Russian home made “whiskey”: 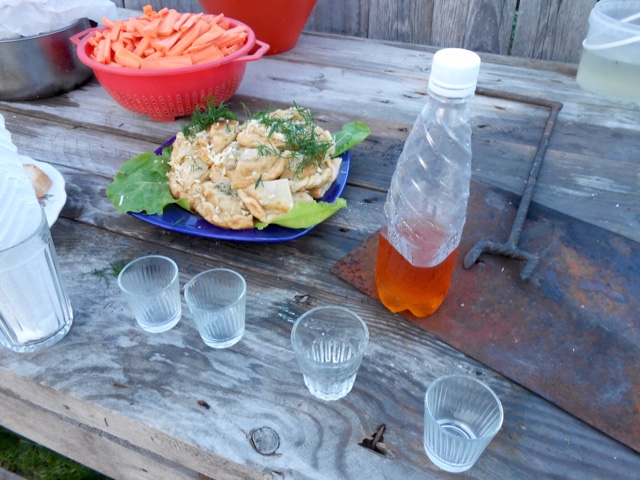 Strong stuff!
Once the Plov done, everyone sat down around a large fire. 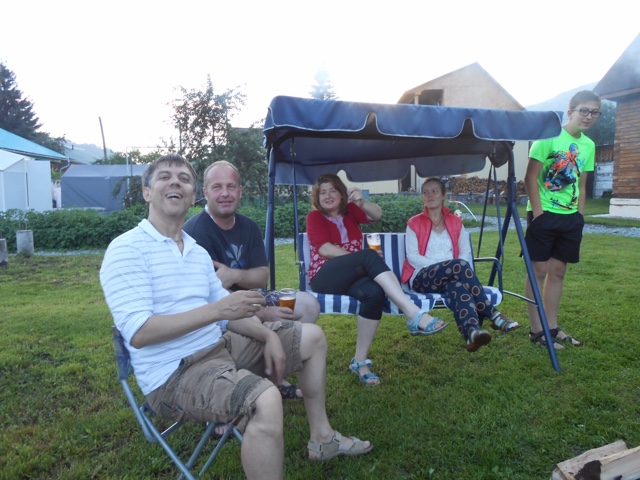 And as always in Russia, when people meet, they all gather around an outside fire, someone grabs a guitar  and everybody will be singing old Russian songs!
Vladimir below: 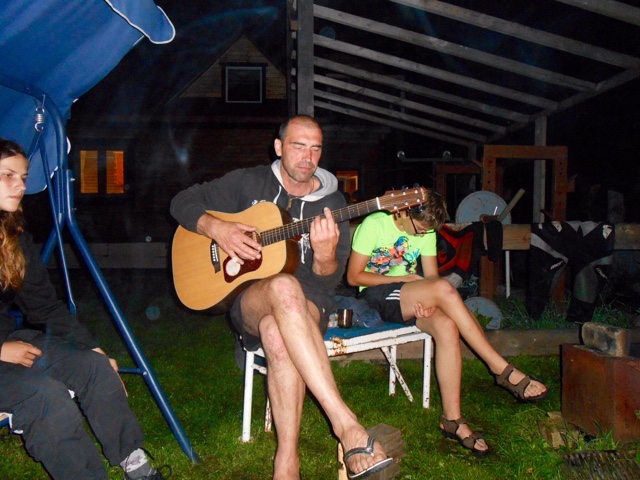 The team’s coach arrived. He was from the Volga region, the  Russian call them Kazak ( not to confuse with Kazakhs from kazkahstan). Anyway, he had spent a career in the army and gave a Kazak massage to some of the riders. This involved using a large machete, and hit the guy with the blade on, quite hard. We could hear the blade hitting the bare skin, although no blood I must add! It was impressive to watch.
Vladimir asked us if we would be back next summer to ride with him. Alistair replied it was a good idea… Maybe if we find a few friends and can convince Anton, it would be nice. I still want to ride the Tuva track ! So watch this space!
Day 46 – Weds. 28 July – Belokurikha – -50kms
The next day, after breakfast, we started packing. Vladimir was super busy and we did not want to get on the way. The race was a very big event.
As we packed the bikes, he was nowhere  to be seen. The van was gone. When asking Dina, she though the guys were probably gone for the day. So we took a last picture with Dina and Olga, and rode off to the nearest fuel station. 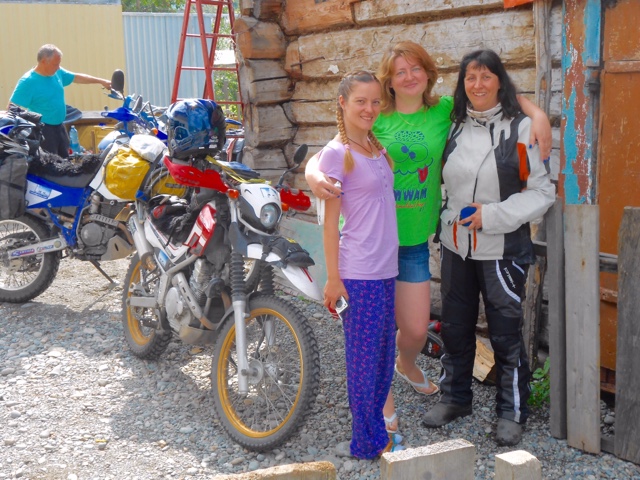 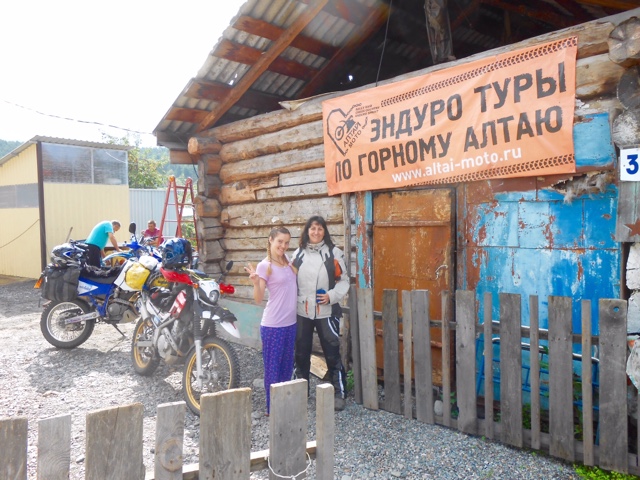 After buying fuel, I saw something like fluff on my sheepskin. So before sitting on the bike, I brushed it off. I did not have my gloves on, big mistake! It was a bumble bee, and I had a nasty sting on my left thumb! I can confirm a bumblebee sting does hurt a lot! After a lot of F words, there was not much to do but just get on the bike and ride!
My thumb swelled to double its size! It did hurt a lot! We rode through small roads to the resort of Belokurikha. It seemed to have lots of hotels, online, so we thought it would be interesting as a stop over. 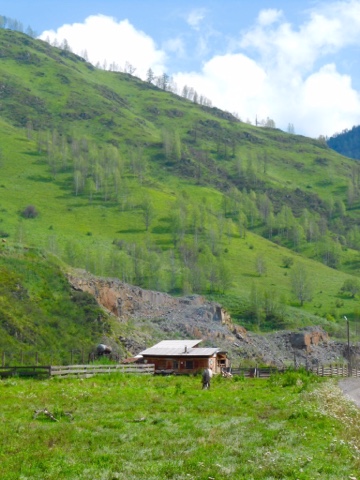 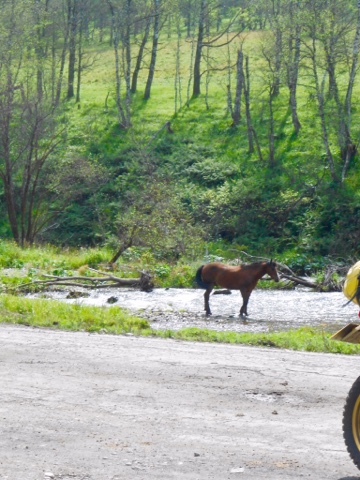 We got there relatively early and found a nice cheap hotel for the night.
Day 47 – Thursday 28 July – Krasnoshchekovo – 230kms
The day started nicely, but soon in the afternoon a big storm approached. We saw the lightening getting closer and closer. We decided to find shelter. The GPS was showing a hotel in the next town.
We rode there in the rain. 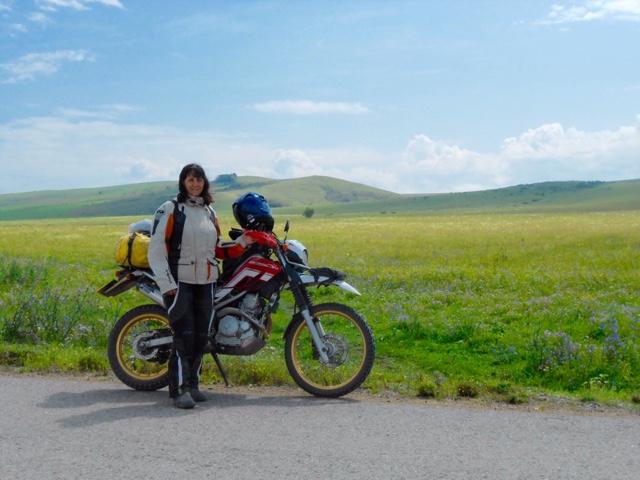 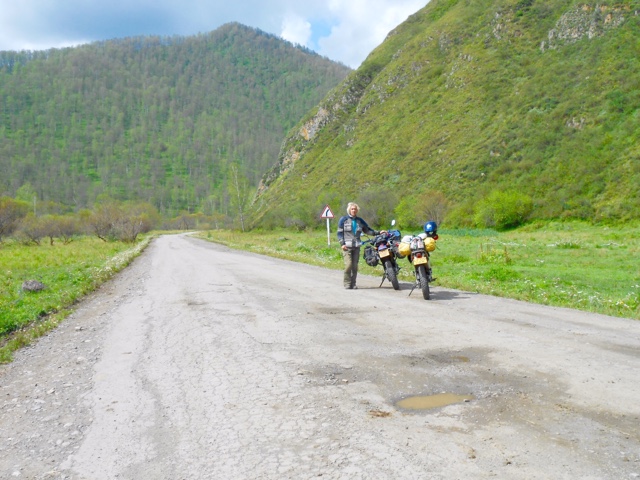 The place was a bit of a dump, and the room was expensive, but the owner was friendly and we had  no choice.
Soon he came to show us the menu, so we had to pick our dinner. It was still very early but we said what we wanted.
Soon after,  dinner was ready , at  barely 5pm!
The owner showed us the hallway and indicated we should put the bikes inside for the night. That was nice.
The room was interesting, as the shower only had hot water… Very hot! The light switches for  the room and bathroom was in the main corridor, outside the room… Strange set up!
A large party of men and few teenage lads arrived. They were unbelievably loud. They seemed to have been drinking most of the night for some of them, and stomping around the corridor all night. No need to say that, in addition to a very small uncomfortable antique double bed, with all the noise, we had a very bad night! 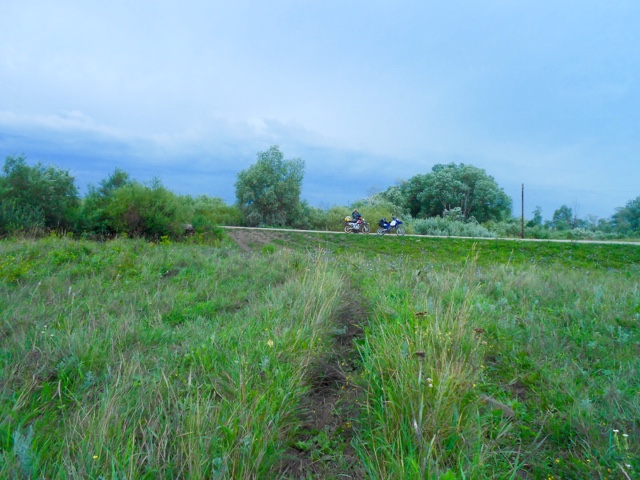 Day 48 – Friday 29 July –  Oskemen, Kazakhstan – 280kms.
As we loaded the bikes, the big party of holidaymakers came out and took pictures of us!
We were further from the border than I had planned but the road was paved and we arrived there by late morning.
One thing we realised, is that, two years ago, when we rode from the same border, basically the reverse of what we were riding this time… We actually never rode these roads.
To this day we have no idea where the GPS took us through, but it was only small gravel roads, farmer tracks and floating a large bridge across the river…we never went through any of the big towns like Kurya, or Zmeinogorsk. Two years ago, we had been riding through beautiful country side and hills… While this time, we rode the correct road and it was mostly tarmac, busy and not really that interesting!
We arrived at the border crossing and getting into Kazakhstan was easy and fast. Both countries share a custom agreement so there was no need to do any paperwork for the bikes, simply keep the document given to us when getting into Russia last June!
As we rode across Kazakhstan, the landscape was beautiful. Everybody imagine this country as only desert, but this is not the case. There were huge fields of blooming sunflowers, high hills and rivers and lakes. Some parts, high in the hills, reminded me of Exmoor, back in England.
Unfortunately the weather was still awful and we arrived in town under a downpour. The streets were covered in water. Changing country we gained an hour! We had been six hours ahead of the U.K. While now, we were only five! 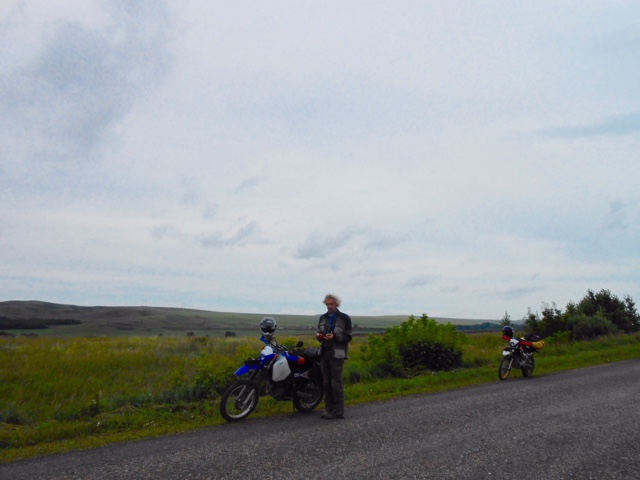 We looked for a hotel that had good reviews and was fairly cheap in booking.com, but as usual, if it exists, it is probably in another street in the other side of town!
We came across and old soviet style hotel and it was good enough for the night.
We went to change some dollars, as the rate at the local shop was quite good, and ATM machines restrict severely how much we can get!
We also found a better hotel, to spend a day rest and doing our chores. So we would move there the next day.
For dinner we found a shashlik (skewered meat grilled) place. It was like a beer garden, but all the area was covered with very large solid marquees. Rain loomed, as expected, once again.
The white clouds were the front of the very black clouds behind them…. 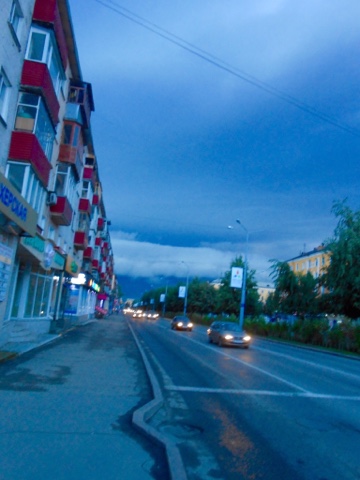 As we just started to eat our meat and drink our beer, the sky turned black, the storm arrived. Not just a  small storm, this was a massive storm. We thought, under the large marquee, we would be fine, but not so!
Within seconds, massive guts of wind got us completely soaked, everyone ran to the tiny restaurant.
It was very packed in there. A group of men, already very drunk, were drinking even more. It was only a matter of time, in such confine space, that a fight would start. We had to move out.
We waited for the rain to calm down a bit,  as it was a mix of hail and rain. I had never seen anything like that, even in Vietnam!
As soon as we could, we ran out to the nearby shopping mall. It was closing and we could not get in. By then, we were drenched to the bone, so we decided to run the 500 or 700 meters back to the hotel. The problem with that, under the massive downpour, was to cross the streets. The pavement was already like a river, the roads were 4 to 8 inches deep in muddy water.
We ran through all and got back shivering to the hotel. We got changed and dry. Everything was soaked. We hung our clothes where we could. We then noticed that the floor in the room, window side, was totally flooded. We mopped the floor using one of the small towels provided. That would have to do. Our shoes were full of water. Nothing would dry that night. The weather forecast for  the next day was not better.
Later on, as Alistair went to reception to buy some water, the security guard asked if he was the owner of the bikes. A huge branch had fallen on the bikes! Lucky enough, it did not tip the bikes over, as they we chained together, and no damage was apparent, once they moved the branch. What a night! 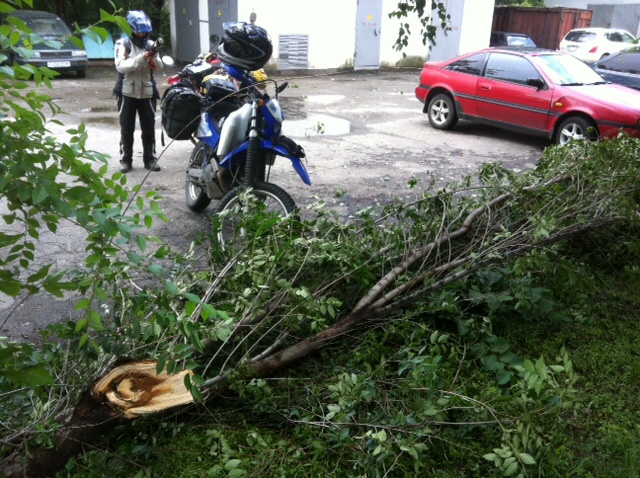 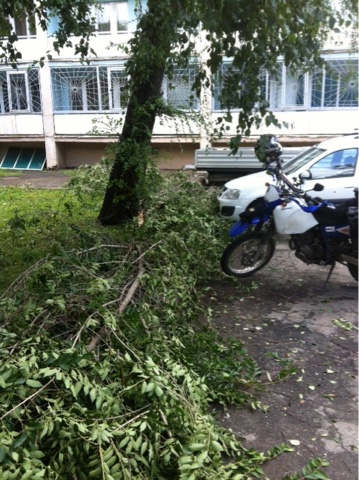 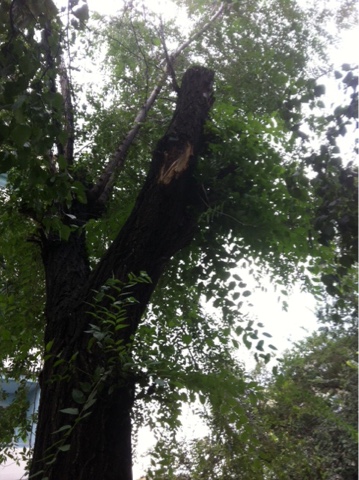 Then there was a wedding party nearby, and to top it all I was ill all night with something wrong I ate!
An interesting start to Kazakhstan!

Cold and wet in Kazakhstan

Within few miles of china