On Wednesday afternoon, Sergei, a friend recommended to me by a fellow motorcycle traveller, came to pick us up at the hotel and we brought the bike to Ali, the mechanic. We explained the problem and Sergei helped with the translation.
We left it there and Sergei drove us back to our hotel.
We did not do much that day.
The hotel was rubbish, with an absolutely vile breakfast, so we found a small flat to rent on airbnb.com, just round the corner from the hotel and for the same price! We moved there the next day.
On Friday, we heard some news from Sergei. We went out for dinner with him in the evening.
On saturday morning, with once again the help of Sergei, we went to the workshop, where we got the list fo what had been done to the bike. i will spare you the details.
We got a lot of help from Sergei! We were lucky to meet him!
We took the bike back to the flat. We could not wait to leave and get back on the road!
Views of Bishkek: 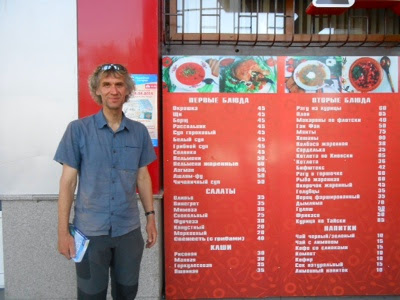 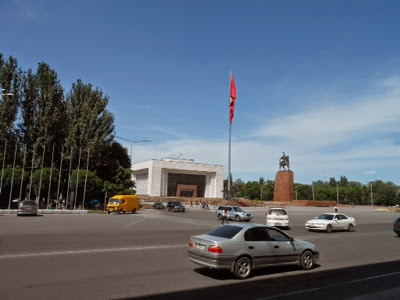 Sunday 15th of June  – Lake Issyk Kul – -97 m
At 10am the flat owner’s sister came to pick up the keys, and off we went.
The bad news is that the tuning was still wrong. The CDI was not the one for the engine, and at high revs., the bike would struggle. So we had to stick to about 40 to 45 mph! At least it was moving, but it was very stressful as we were all the time wondering if it would die again! We pressed on regardless. 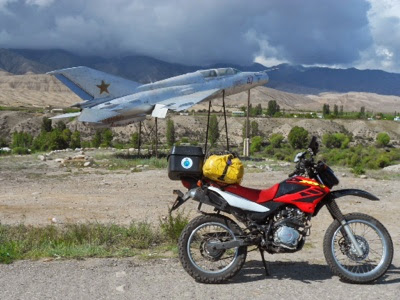 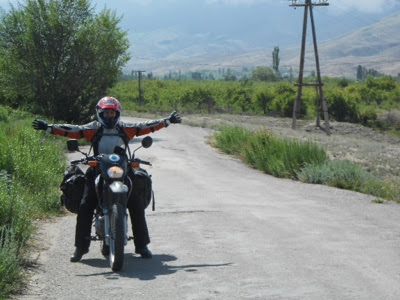 We made it to lake Issik Kul, and rode the south bank, which is the less developed side. It was very beautiful. Although, as you may expect, we ran into yet another storm.
As we stopped few minutes to let Alistair put on his waterproofs  he made a great impression of Chubbaca while trying to get his wet hands in his gloves!
We stayed overnight in a nice guesthouse.
Monday 16th of June – 144 miles – Kegan, Kazakhstan
We were planning to spend one last time in Kyrgyztan, in the town of Karakol, before crossing the border. However, as Karakol was only about 80 kms and the weather was good, we pressed on and got to the eastern border. 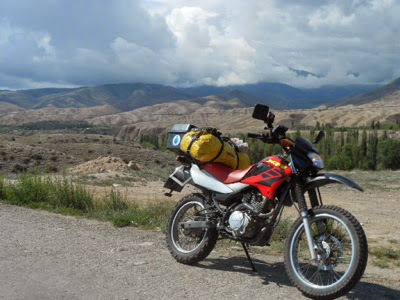 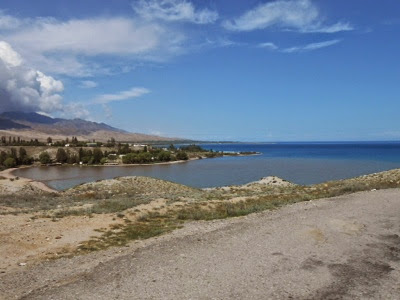 The ride there took us through a small terribly bad surfaced, sometimes gravel road, but the view were stunning. We climbed up into high valleys where the locals move up their horses to graze all summer. 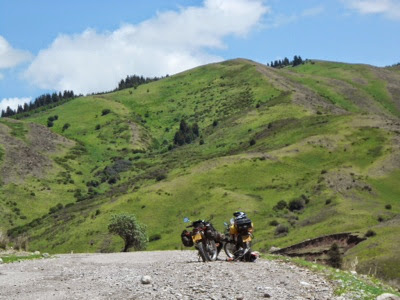 We got to the border by mid afternoon. It was a very small border with just few buildings for both sides. It would have been fast if the officials had not been bored and keen to speak with us! The setting was in a beautiful and very peaceful valley, surrounded by mountains and horses! 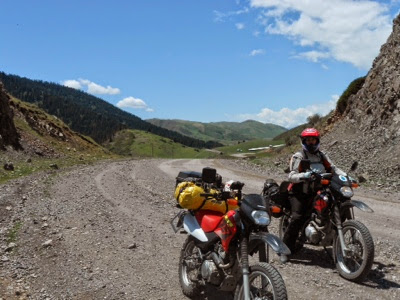 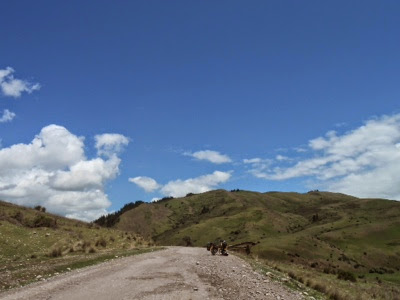 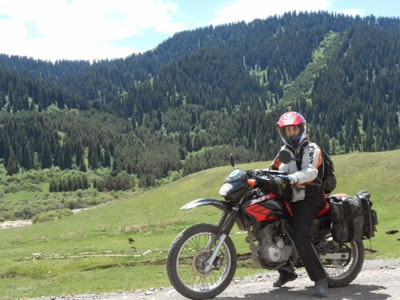 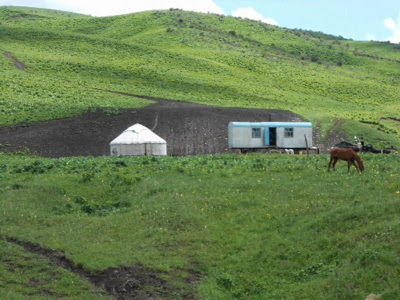 We then rode to the nearest town. There were no money changers at the border! That was a problem as  we only had 3000 tenge, about 16 dollars, and too many useless Kyrgyz Soms!
After asking several times, and finally getting someone to take us there, we found the local bank! As usual, it was in a house, there was no way to know there was a bank there!
We got some more money.
By then it was getting late and we asked around about a guesthouse. After turning and asking a lot, we found a place for the night. 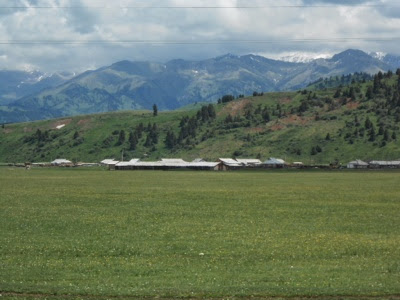 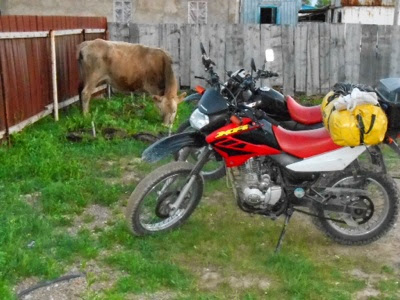 We discussed about the itinerary. In Kazakhstan, foreigners need to be registered with the OVID. If you arrive by plane, it is done at the airport, but by land it has to be done within 5 days. If not we could get in big trouble. We decided to go to Almaty and get a hotel to do our registration.
We had an overpriced dinner at the only cafe in town. But then, not speaking well russian and without a written menu, then can ask what they want! Kazakhstan is definitely more expensive than Kyrgyzstan though!
Tuesday 17th of June – Almaty – 160 miles more or less…
We left very early as there was no breakfast on offer. We rode down from the high valleys through beautiful canyons. After the horrible flat desert of the west side, east Kazakhstan was showing a much more beautiful landscape. 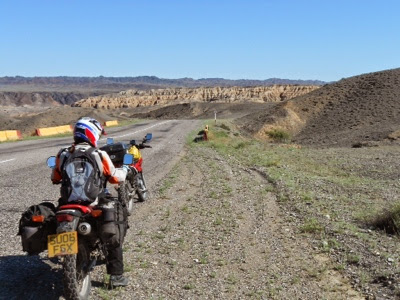 So after riding two days east and north,  we turned west to get to Almaty! 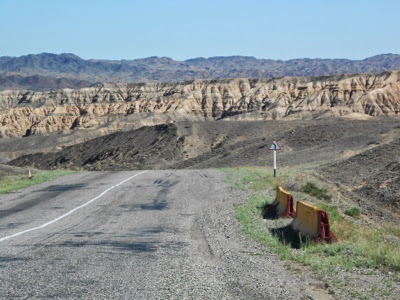 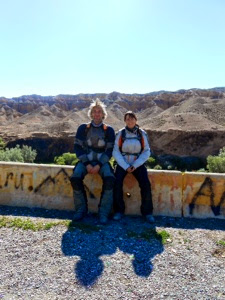 We arrived early afternoon. The traffic was insane, with massive traffic jams and cars going anywhere and pushing us from all sides!  I was not happy!
After a long ride into the centre, we parked the bikes and Alistair went on foot to check out a hotel that might do the registration for us…. Meanwhile i was left to guard the bikes, in the intense heat of Almaty. We parked on a big wide avenue ( all streets are soviet style big avenues!) between two cars.
I nearly got on a fist fight with a local woman, false lashes up to her hair line,  tiny, on a HUGE range rover that she clearly could not drive. As she tried to get out of her parking spot, in front of our bikes,and  with plenty of space in front of her, she still reversed enough to tilt Alistair’s bike. I caught it on time, i was furious, if the bike had been going down, i think I would have used my helmet as a hammer to wreak her car! Maybe i am getting a little bit grumpy with age?
Eventually, we got to a hotel, two hours after arriving in town.  The hotel could do the registration, but it would take several days. Or we could do it ourselves. After plenty of asking we found out how and where. We were told to take a taxi to the OVID. The girls are reception wrote the address.
We stood then on the pavement, waiting for a taxi. We saw none! After a while we went back to the hotel. It seems that in Kazkahstan, any car is a taxi! You just waive your hand and wait for someone to stop and see if they can take you where you want to go!
We finally got to the Ovid around 4:30pm. After asking, we got on a big queue at a window. When I say queue, i mean a mass of people all trying to get to the window! When it was finally our turn, we handed over our passports, saying loudly ” tourist! Registration!”…. Only to be handed back a form to fill. In Russian! Hmm… We got lucky as a Uzbek student was there and helped us fill the forms.
After more queuing, waiting etc, we got our registration form done…. What a day! We were happy as this meant we could leave Almaty the next day! 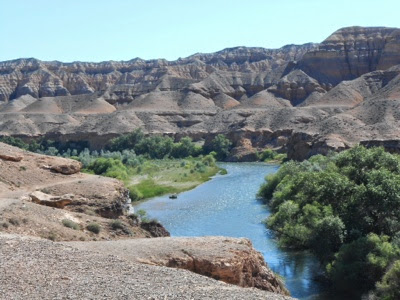 Georgia and the road to nowhere