Skip to content
Tuesday 3rd of June – 0 mile – Osh
The guest house was a bit of a building site and had no inside parking for my bike. I cannot stand my bike sleeping outside. I had a bike stolen in brazil, inside a guesthouse complex, during our year round South America. Since then, I am a bit paranoiac when travelling!
So in the morning we packed up and move to a more central, cheaper and more pleasant place, the soviet style, but refurbished Osh Nuru or Ош Нуру if you prefer!
Views from our window: 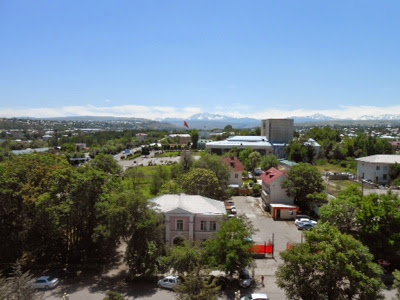 After lunch we called Patrick to find out how to get to his house. He was in town and came to collect us on his way home.
Once there we discussed solutions. The engine was buggered. Importing the parts would cost a lot and would take  a long time.
We discussed possibilities of buying a chinese bike, but they are quite expensive in Kyrgystan.
Other option would be to buy one of Patrick bikes, drop it at his Swiss office ( he is from Switzerland) and sell it back to him at much lower price. Sort of rent but with a power of attorney to cross borders.
He told us he would investigate options.
Back to the hotel, Alistair started investigating online for parts.
We went to dinner at the california cafe, american owned apparently. The only place in town i dare eating salads and their food will not cause any nasty side effect!
I got some Cipro from a farmacy (antibiotics) as mys tomach had been unwell for the last few weeks.
In the evening Patrick sent us an email listing our options:
1 – we import the parts and his talented russian mechanic would rebuid the engine;
2 – buy / rent one of his bikes and deliver to switzerland;
3 – his mechanic found out that there is a cheap (450 dollars) chinese copy of the Honda XR engine, and it is available in Bishkek, the capital city. The engine should be able to fit on the XR.
We replied immediately to get the chinese engine!
Wednesday 4th of June – few miles to Patrick’s house – Osh
In the morning, Oibek, Patrick’s office manager took me to a local hospital for an Xray of my hand. After two weeks, my hand, especially above the thumb, was still extremely painful, and i was concerned i may have broken the scaphoid bone. That is not easy to spot without an xray, and the bone could set badly and cause problems in the future.
So we went to a very soviet style, run down dingy hospital. One xray machine did not work but we went to the oposite side of the hospital and found a very old looking one working. It cost me 4 dollars to get the xray.
We then went to see a doctor and he confirmed nothing was broken and prescribed a gel. I paid him about 20 dollars. It was fast. It looked to me like each room or xray machine was a mini private business…. Strange.
After a quick lunch at the california cafe, we rode with my bike to Patrick’s house and left my bike there with a list of things to do on it.
( new back tyre, new left mirror, weld and reinforce the luggage rack….)
Thursday 5th of June
In the morning we  went to the Great Bazar which is not located at all where the Lonely Planet guide say it is, as usual in this trip. We think none of the guys who wrote this book actually ever went to central Asia. All maps and most landmarks , like banks or hotels or restaurants, are complete fantasy! 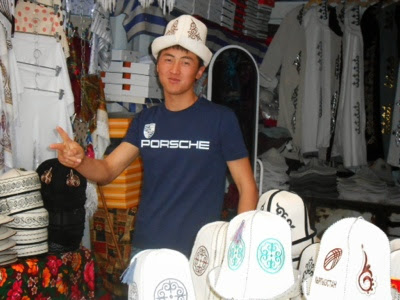 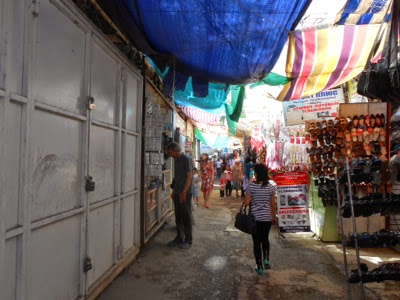 After seeing the section for meat, hanging in the sun or laying down on stones, in 35 degree celcius, i decided to turn vegetarian until Russia!
We were hoping to find a sheepskin. We lost ours in Andijan, forgetting it in the hotel!
Sheepskin helps a lot for butt pain when you ride a bike for many hours. Especially as we have little thumpers and the vibrations make it very tough!
No luck, though, we found none!
In the afternoon we took a taxi to get to Patrick’s house again. The engine had arrived and was being installed. There were some problems with the ingnition that was incompatible ( CDI). The russian mechanic was trying various CDI from various bikes for compatibility….
Alistair’s bike: 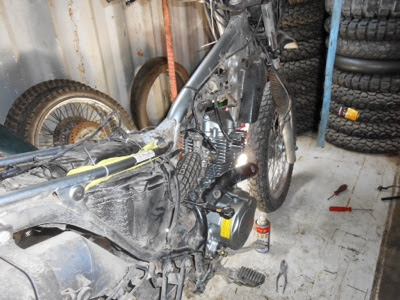 On the plus side, he will now have a 150cc bike!
Meanwhile Alistair changed the oil on my bike. 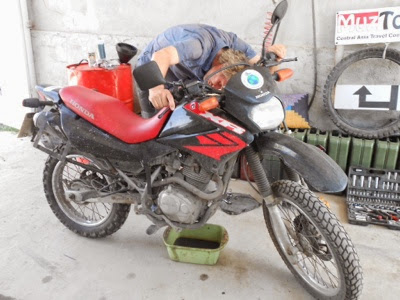 We also took the starter motor from his bike ( which is real honda part!) and put it on my bike, to replace the cheap chinese part that I had. As that failed already once in Turkey, we know it is bad quality.
Honda parts in another hand, are top notch quality! So it was good time to recycle the good bits from Alistair’s engine! 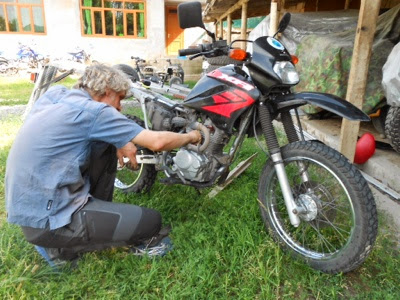 During those last few days we got to know another motorcycle traveller, Steffan, a german lad. He  builds giant telescopes for what i understand. He spent many years  in Antartica working! How cool is that!? Steffan was staying in our hotel and had been storing his bike with Patrick for half a year. For the last few days he had been doing some work on his bike, mayking the most of Patrick’s workshop. 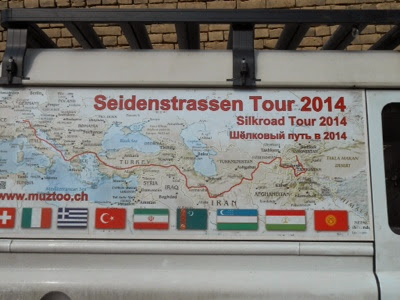 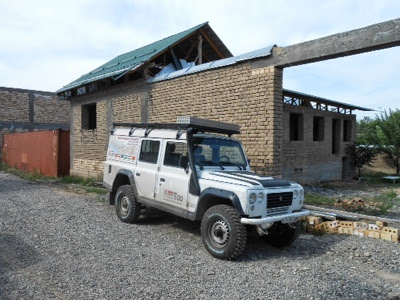 In the evening, instead of the california cafe, where we were going lunch and dinner every day, we went with Steffan to a more select place.
Beer, in Kyrgyz, is served with a straw for women: 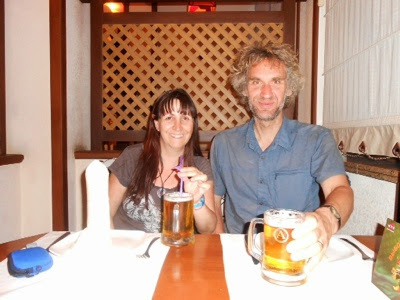 And here the usual toilets for the ladies. Here, as it is an upmarket place, it even has some toilet paper: 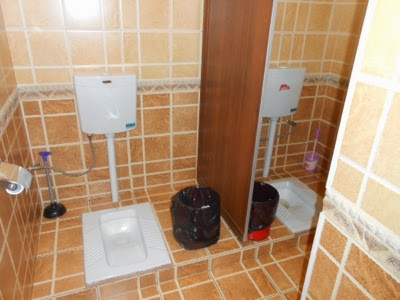 into the wilderness: western Mongolia – Part 2