We had a day rest in Oskemen, after moving to a slightly better hotel.
I was still unwell with my stomach and Alistair was also starting to feel unwell. I suspect the shashliks the previous night. Although the storm interrupted our meal, the grilled porc was undercooked and rather pink, as far as I could see in the dark.
In the afternoon we explored a bit the town. The aftermath of the storm was easy to see in the flooded streets and uprooted trees. It had been a bad one. Asking at reception, they confirmed it was not normal weather. 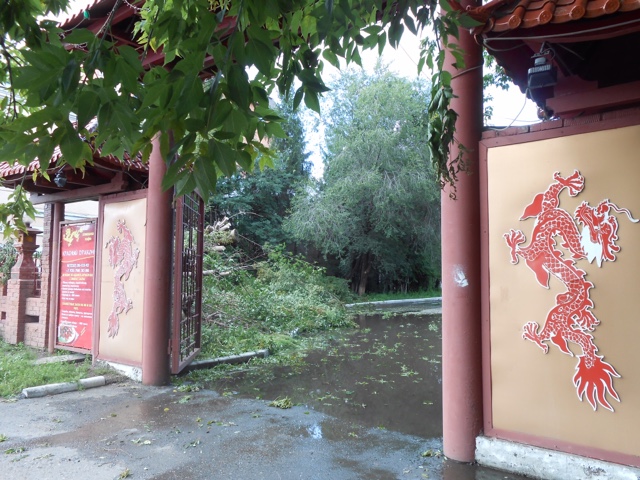 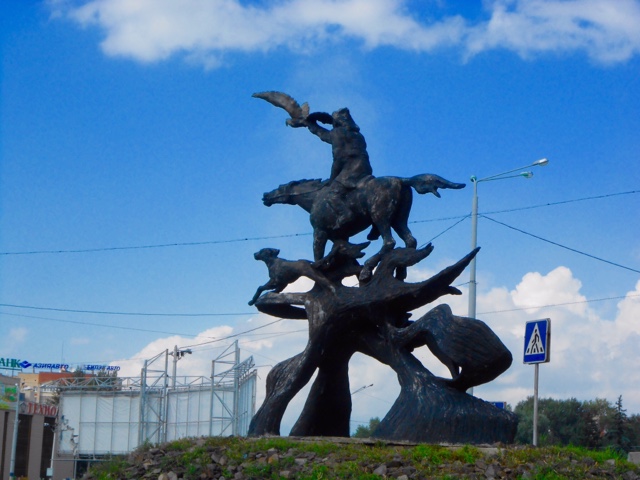 At least, the next day, the weather was better, after another storm during midday.
We decided to treat ourselves in the evening, and had a meal at the restaurant in the hotel. We even got a bottle of wine, although it was rather warm. When I asked for ice, the girl brought a small cup of ice, instead of a bucket. I had to explain that white wine has to be cold to be tasty! In Russian! I know to ask all the important stuff like that 🙂
Day 50 – Sunday 31st July – Ayagoz, 320 kms
The weather was rather clear when we left. The ride started nice as we left town and came across a new and very shiny and impressive mosque. 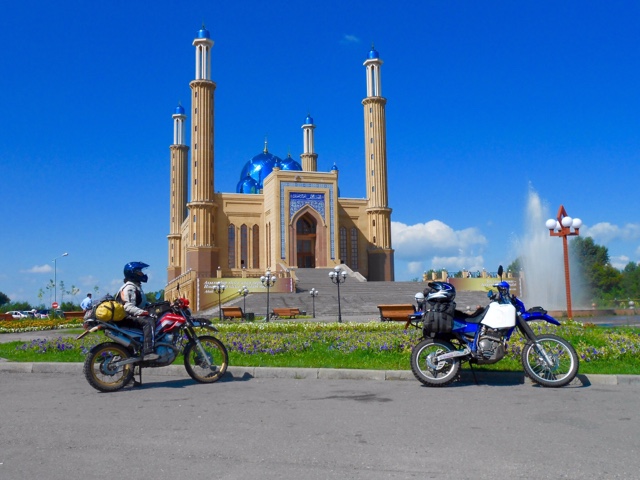 After a couple of pictures we rode out of town. The road was in bad condition, so it was slow progress.
When we stopped for pictures or water, people in cars would stop and come shake our hands and ask us the usual questions ( where are you from, where are you going, etc…). They would also ask to get photos! 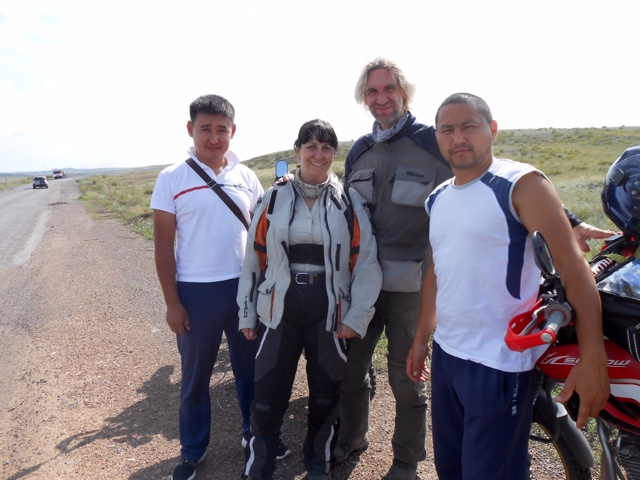 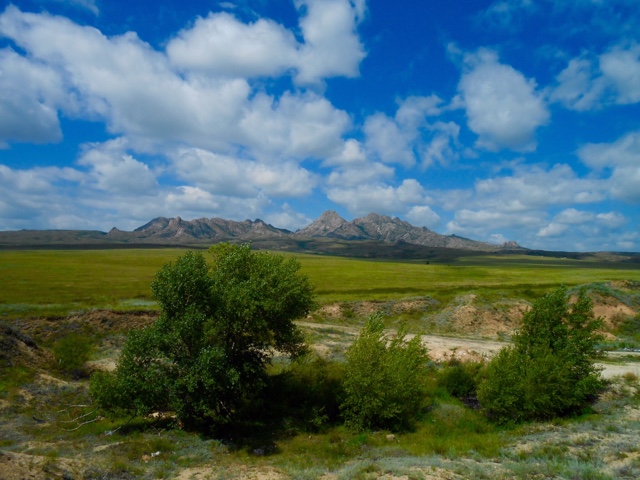 The landscape was beautiful. With so much rain, in was rather green. Two years ago I remember the whole area as being almost a desert. I forgot about all the hills and mountains. 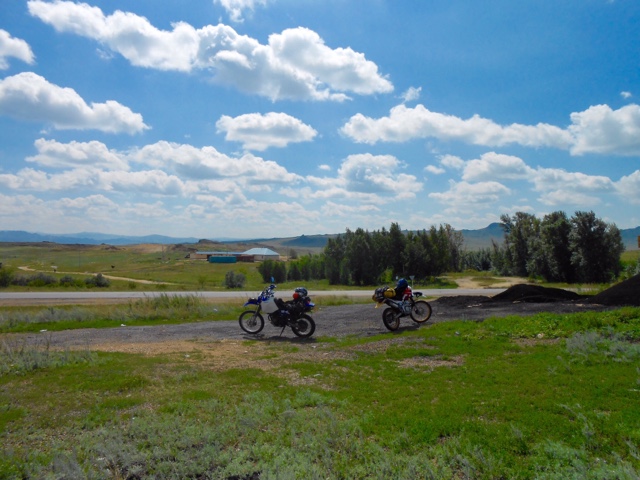 We saw many lakes and flooded land, probably because of so much rain.
We rode all day. We had left rather late as we were aiming to get to Ayagoz. In my memory it was just a  dusty military town.
My memory was right. Last time we slept in a bottom of the range hotel near the station.
This time we found a new hotel with nice rooms. The owner’s daughter, Laura, spoke very good English and was very helpful. She was studying in Moscow, learning both English and French, and wanted to do Master  in economics and later work in a big multinational company! A future business woman! So she was very keen to practice with us both English and French. We  were happy to help. Bright kid!
As it was early, Alistair got his tools out to adjust his chain. With such a  bad road, the chain was flapping too much.
Later on, with the help of Laura, we managed to eat at the hotel with some fried eggs and rice, served with little salad and cheese. It was great.
Day 51 – Monday 1st of August – Kanbanbay – 300kms
The weather turned wet and horrid again. It was also rather chilly and in occasion we ended up with an  absolute downpour! I certainly did not expect that sort of weather in Kazakhstan! The road was very bad as usual, and under the heavy rain it turned into a  river, impossible to see the potholes! 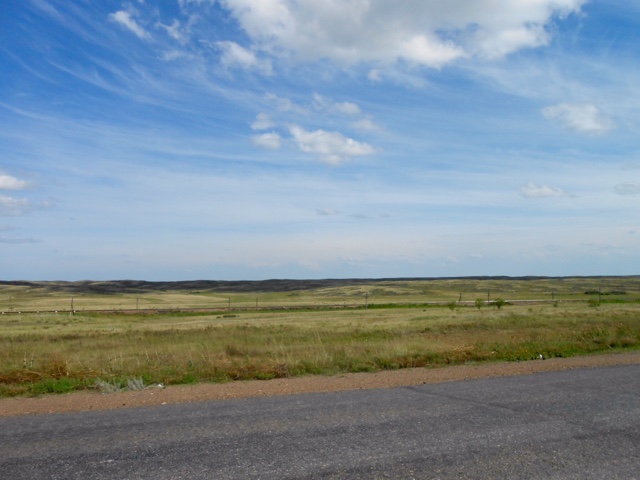 The day was very tiring and  it was slow going. 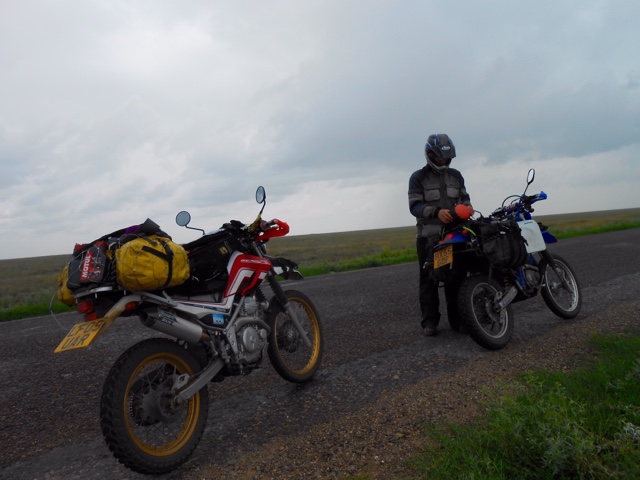 By mid afternoon it became evident we would not be able to make it all the way to the next big town, Taldykorgan, and decided to find a place on the road.
A small spot on our GPS showed a village with a hotel, of sort. 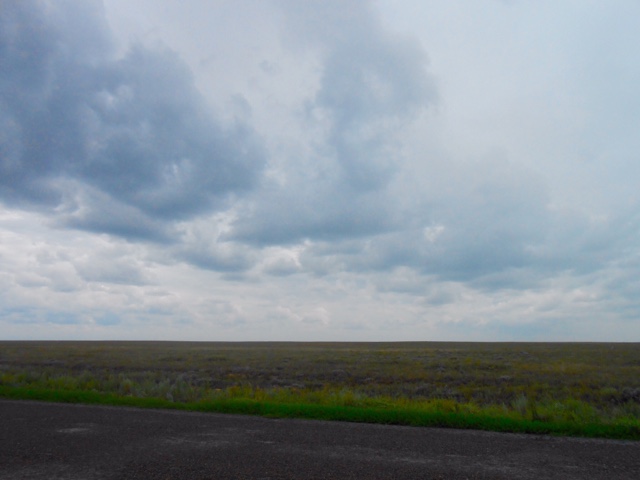 Another abandoned building where we stop to put on once again our waterproofs! 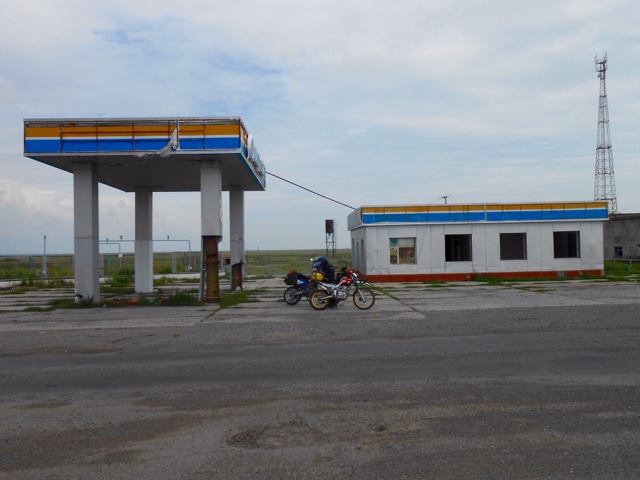 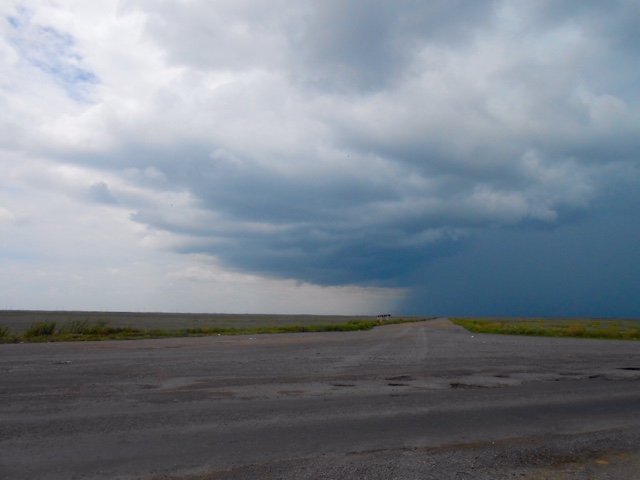 We arrived there and found the place. It was run by teens from what we saw! The room was cheap, as it was only two small beds in a  shabby room. There was a toilet and a shower at the end of the corridor, to be shared by all the rooms in the floor. There were quite few rooms! We hoped that not many people would stay the night. Wishful thinking! 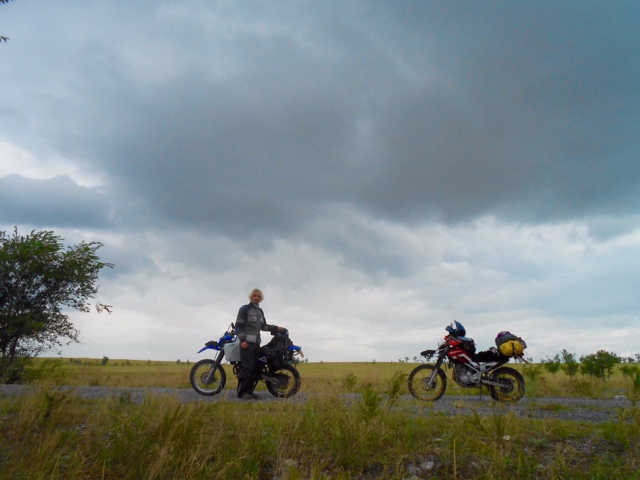 Soon after our arrival, a large overland car, with a French plate, arrived. We spoke with the drivers, two retired guys from  France. They were on their way to Mongolia. We looked at maps and I showed them the short cut by the Shemonaika border, closer than by Semay, which is a bigger, busier border crossing into Russia.
After exploring a bit the village we managed to find a cafe. We returned later with the Frenchs and had some salad with piroshkis for dinner. It was tasty.
Few other cars and a mini van turned up with locals staying for the night. The toilet looked pretty bad  after a while!
The place had dogs. They spent the night fighting and barking as one of them was on heat, and all the dogs of the village appeared to have been spending the night in the backyard!
I got up before 6am for a quick visit to the loo, before the crowds took over.
We packed up. We asked for breakfast, but despite a busy kitchen and tables set to serve breakfast, with cups and baskets of bread on the table, we were told they did not serve breakfast! Maybe all the display was for the staff only?
In any case we left.
Day 52 – Tuesday 2 August – Taldykorgan – 250 kms
We left by 8 am and after a while came across a small cafe by the side of the road. We managed to get a  cup of tea after a very long wait.
The weather was better, but not the road!
Leaving the hills we crossed some large steppes. We saw many horses and cattle, but no camels. They seem rather rare on this side of Kazakhstan. 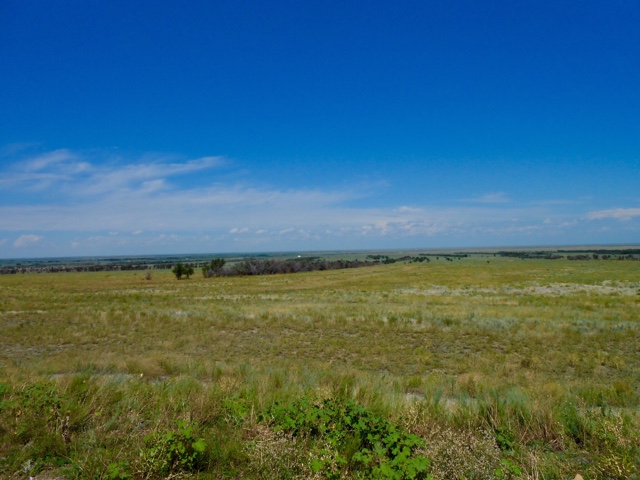 By late morning we found a cafe serving some sort of food we could identify. They even had eggs. We got fried eggs with rice. That would do for brunch! 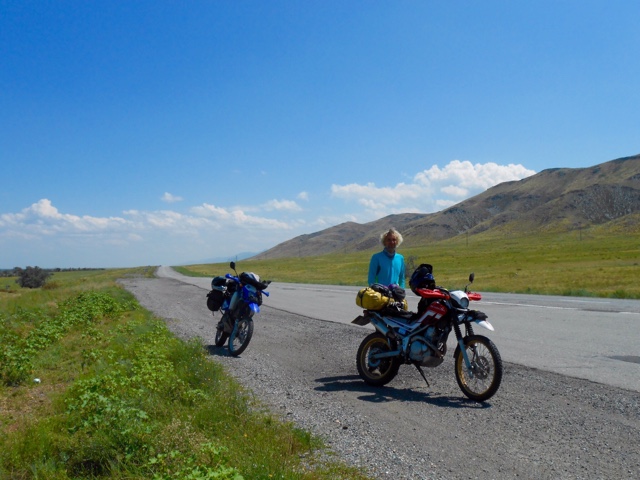 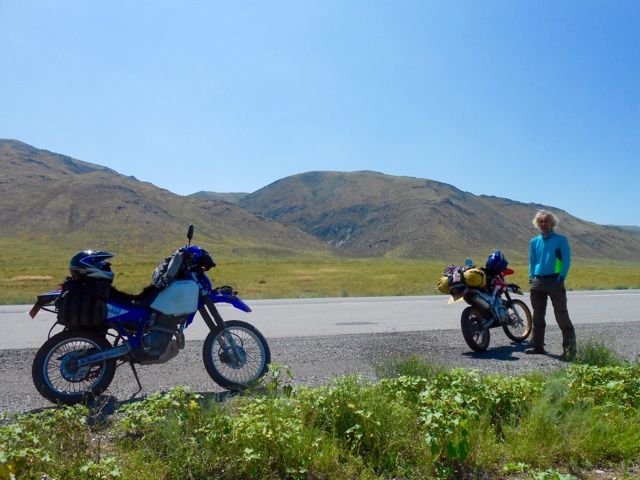 We arrived to town by mid afternoon. We remembered the hotel from two years ago, but finding it was more difficult.
We found the hotel advertised in booking.com, they wanted 19,000 Tenge, not including breakfast or parking! We rode away, and found another one. It was grotty. For 7000, the place was dirty and had no windows at all. It looked like a cave, with the corridor storing lots of crap…. We declined.
After setting the GPS for the town centre, we finally found something we recognised, and promptly found the nice hotel from last time. For 10,000 tenge (about 20 pounds?) we got a nice clean room, private large bathroom, parking for the bikes and included breakfast! Paradise after the previous night!
We have seen a lot of police on the road. We were unable to buy bike insurance for the few days spent in Kazakhstan. I know that lots of other travellers get a lot of hassle from the cops!
Kazakhstan has a reputation for that. So far, they have superbly ignored us. More interested in checking trucks, or , when driving past, waved at us! So, not all Kazakh coppers are after fines! In  general, Kazakhs have been very friendly.