We packed up and left Petrozavodsk under a glorious sun! We had decided to ride around the north shore of lake Onega. The road was pretty good, to start with, and we made quick progress.
We got fuel about 60km out of Petrozavodsk.
We reached the north west side quickly and stopped at a fuel station for a quick snack and rest. We still had plenty of fuel … And the area is popular with holiday makers, so surely, plenty more fuel stations? Wrong. We passed many road works, but no more fuel! At Least now I know that I can make a full 310km on a tank!
By the time we got to Pudozh, our stop for the night, I was a bit worried! My reserve light and been on for a while! We bought 9l but we have no idea about the precise size of the fuel tank on my bike! You see, even in the US they have different sizes depending on the model… And I have a Japanese import! I hope it is 10l!
Once we reached town, covered in mud and dust, thanks to the massive road works and gravel sections, we rode to the hotel I had found online. It was full! We looked for the second one in town . It was Saturday, and the road there was blocked, with the cops there we could not push through what appeared to be a mix of funfair and market.
We went around few tracks, and same problem. We tried a third time and we still failed to even get close! No clue where that bloody hotel was!
We rode to the third choice showing in our GPS. It was a guesthouse, but it was full!
The owner then told me to follow him to try something. He basically took me to all his neighbours, see if one would be able to take us for one night, with no success. Eventually he phoned someone and told us it was ok. We rode two houses down the road and went into a courtyard.
For 2000 roubles (which seems to be the going rate for a guesthouse) a family took us in for the night.
The husband, Denis, was getting his BBQ burning wood, dressed in the usual outfit for a Russian man when hanging around: a military style camouflage trousers, and no shirt of course! His wife showed us their front leaving room, next to the door. The house was brand new and absolutely enormous! Well built too with very thick walls. 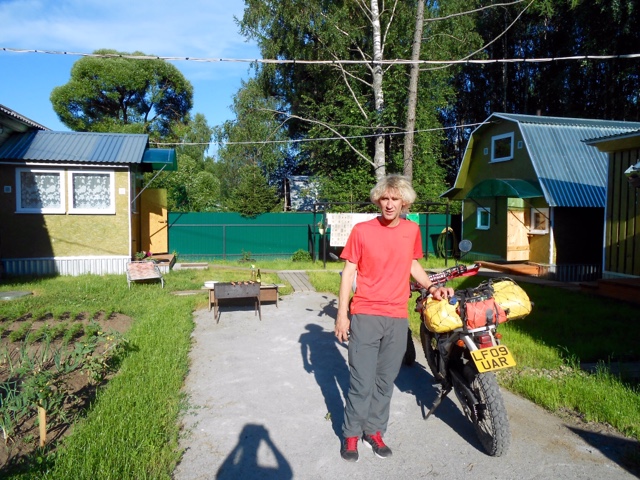 In the hallway, there was a sofa with a big riffle! Over the years, many animals have looked after our bikes. Many dogs, nice or scary, many cats, the occasional llama, alpaca and even the odd cow, but never a cat with a riffle! Not to be messed with! He means business! 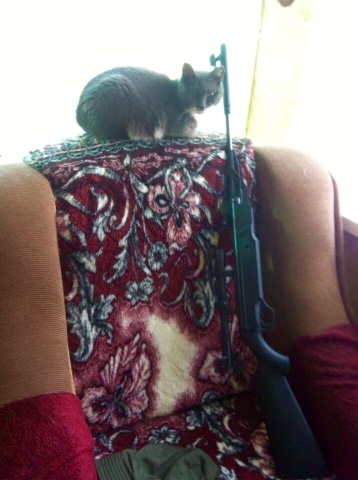 The living room had a sofa bed, a large flat screen TV with millions of channels.
They showed us the banya, an outside building, where there was a shower as well as the usual sauna and rooms, although that banya was bigger than most London flats! It was huge too!
We had a quick shower as we had a very hot day.
Then, while cooking his shashliks on the barbecue (chicken  skewers) Denis asked us if we wanted to be taken into town for dinner. We said we would walk but Denis was the sort of very serious and used to command type of man, and he would not take “no” for an answer. He immediately got his car out of the garage, enormous of course, with also a brand new VW van as well a new car, and drove us to the cafe. He then came back to pick us up one hour later.
After that, as the family was having its dinner, we went to our room. We were tired and had an early night.
The next morning, as we started packing the bikes, Denis reappeared and asked us if we wanted coffee or tea. He took us to the enormous kitchen, we had a quick look at the same time at the second massive living room!  We had a breakfast with bread, cheese and sausage. I never saw Denis smile, he was very serious, with an air of authority, and we hardly saw his wife and son, but he was very kind to us.
Day 22 – Sunday 3rd July – Emetsk – 570kms 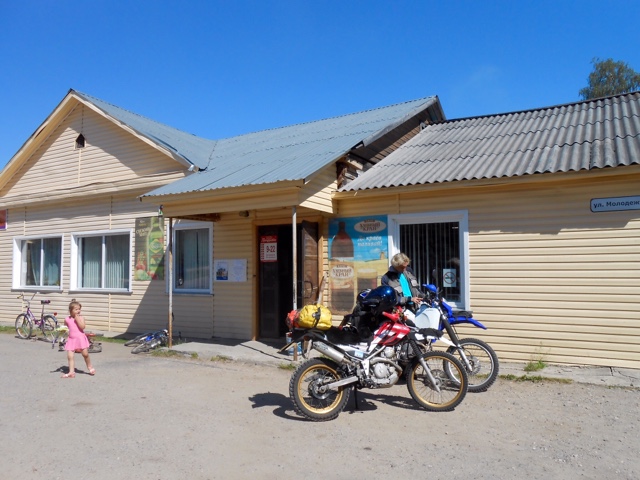 The day was sunny again as we rode off. The plan was for a medium day riding, and stop at the only place for at least 300km  before and after, that showed about 3 hotels. The town was Plesetsk.
I had researched the name on google, why would there be hotels there and nowhere else? Apparently, there is a secret cosmodrome nearbye. Well not secret anymore but used to launch military and governement satellites. It is still used and will become more used for commercial launches too as Baikonur ( in Kazakhstan) is very expensive to use for the Russians.
I thought it was cool and maybe we could glance at something on the way. In any case, it was the only town with a bed for the night.
The road was rather bad, we soon ran out of asphalt and it turned into a bad gravel and sand track. It was compacted enough so we managed to make good progress.
By mid afternoon, we got to Plesetsk.
We found a hotel near the station. I got in and asked the receptionist if she had a room. The place was dead, no one around. She looked at me as if I came out of the space station, with round eyes, before say no, no rooms! Strange! We rode through the horrible tracks and donkey trails that are the streets of this little town and found another place eventually.
I got up to the reception area. I asked the administrator again about a room. The place was enormous and did not seem to steam with activity! She asked lots of stuff I did not understand. Eventually she asked for my documents. Finally,I understood that  we could not stay as we did not have a special permit from the FSB ( ex KGB!) . Usually foreigners need a special permit around border zones … Damn! The woman confirmed we needed a special permit to be in the region! Not good. If caught in a special permit zone without one, this is very serious and would be prosecuted!
I reported back to Alistair and we got on the bikes! We had to move quickly and avoid the police!
(I will write the rest tomorrow….)