We left the sleepy town of Visbek, and rode through country lanes and small roads, across valleys and many dense forests. We were aiming for the fairly touristic town of Waren, in East Germany.
The town is set by a large lake and seemed to have many places to stay.
After a long day ride, punctuated by many showers, we got there. By then I was greatly suffering with my hard sit. Two hours non stop on the XT and I would be ready to confess to anything! This was becoming a problem.
Arriving at Waren, we turned a bit in town . The first place was one of those “unmanned” hotels where you have to phone somewhere to be let in! Eventually we found a small guest house with a human being at reception. Unfortunately, it had no wifi! That was a bit of an inconvenience as we were using online maps for next day itinerary and looking at potential places to stop for the night!
Germany seems very provincial for such things. For example, when we rode to Romania, 3 years ago, every fuel station had free wifi and every hotel certainly had wifi, even in tiny places where no tourist would venture! In Germany, not only very few people seem to speak anything else than German but also, wifi is not wide spread, at least for tourists!
To be fair, the average age of the local tourist in Waren, was about 100! We must have brought the average age down by 40 years, just by being there! I don’t think the old folks use much wifi !
I have to say that technology has changed very much the way we travel these days! Even 4 years ago we had no tablets or smart phones, while now, with a tablet and wifi usually widespread, it is very easy to stop on the road and look ahead, deciding which town to stop at, looking for hotels and guest houses…
This will change once we cross into Russia and leave the main roads for the back country….
Day 5 – Thurs. 16th June –  Szczecinek – 340 kms
We left Waren after a small breakfast, and after 150km crossed into beautiful Poland. The day was brighter and we had no rain!
We remembered crossing Poland, back in 2009, on our way to the Baltic states, and the roads were then in very bad conditions. Roads now are fairly good and we made good progress.
Soon after the border, we stopped at a McDonald. No I do not have an obsession with their food, but they offer free wifi! We checked at a potential place to stay for a couple of days. We decided on the region around Drawski park and booked online a nice guest house by a lake. We then set the GPS to this address and arrived there by about 4pm.
The owners had try to call us but failed to contact us. To be honest, we don’t speak polish and they did not speak any English, so not sure what sort of conversation we could have had.
Anyway, when we got there we found out that we could not stay! No clue why! We said it was not a problem, and as we got ready to leave the owner asked me where we were going as final destination ( or so I understood!) … When I told him Russia, Siberia and Kazakhstan, his eyes nearly popped out!
I was a bit surprised by his reaction, at first, but then, I suppose it is unusual?
For me these trips have become so much the norm that I am surprised at people’s reaction…
To be fair doing what we do is easy, it requires some preparation and organisation and, as I keep saying, if I can do it, anyone can…. Not many chose to, though!
So we rode further and arrived at Szczecinek… After turning a bit, and finding once again, once of those “unmanned” hotel with just a telephone number to call, we finally found a nice large house near another lake! It had a big room and we decided to stay for a couple of nights.
By then we were fairly tired, as the last few weeks had been quite busy and stressful, and my back side needed a rest! And a solution! 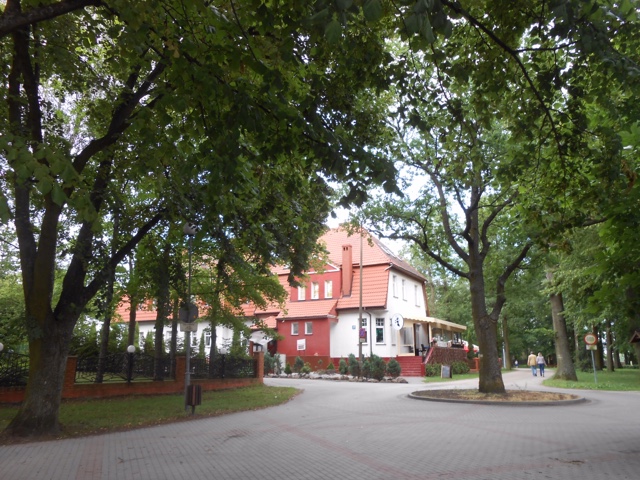 That evening, trying to find a place to eat ( the locals seem to live off pizzas, kebabs and ice cream!) we found a restaurant in a shopping mall. I took the opportunity to buy a “shami” for few pounds, from a sport shop, hoping this will help a bit when riding my very hard seat! 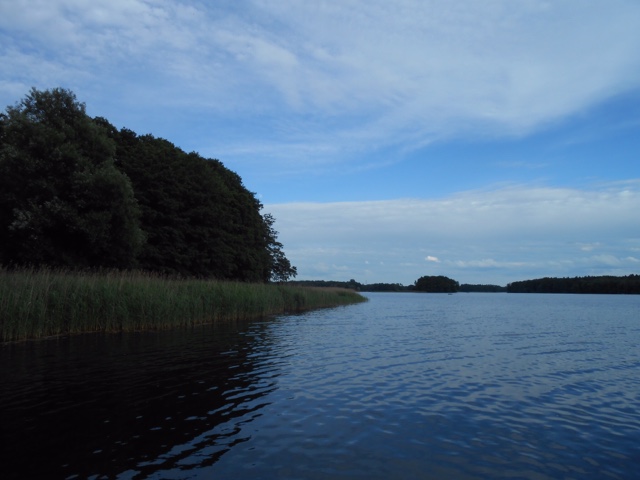 Day 6 – Friday 17th June – 0 kms – still Szczecinek
The day was grey and very wet once again. When will it stop raining?
After doing some bit of laundry we walked into town, trying to find a bicycle shop. After wandering a lot we came across a huge Tesco. We found cheap  gel seats and bought two. Alistair got himself few items as well from a sport shop ( replacing his very old shoes among others).
Britain seems to be very popular in Poland, at least British clothes, as you can see from the picture below. We saw at least three shops selling second hand British brands ( like Next, M&S… ) in the high street! 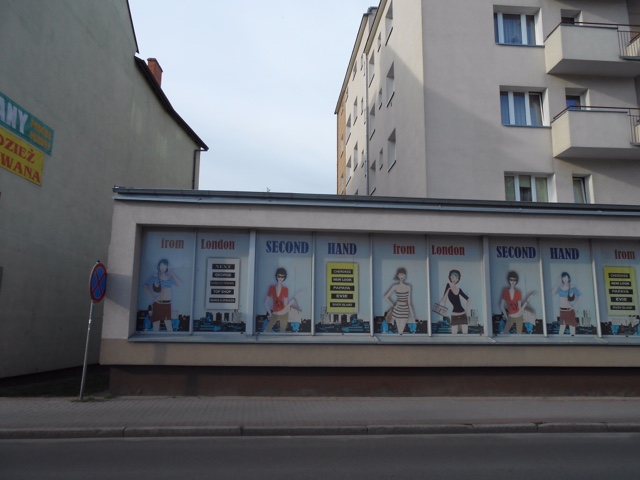 Planning ahead is important, occasionally. As we plan to be in St Petersburg next week, we need to find a place to stay. Finding a hotel in a big town is not a problem, finding one that has secured parking for our motorbikes is!
After having my motorbike stollen in South America, back in 2007, I am now very cautious!
I spent part of the morning looking into this and looking at my maps and deciding which border crossing to take into Russia, either via Latvia northern border, or the small Estonia Southern border. It will depend on timing. We have to be in St Pete on Friday next week, as I now have a hotel booked. We have plenty of time to get.
That’s all for now folks! 🙂

Cold and wet in Kazakhstan