Our hotel, or room in someone’s house to be more precise, was in the main square. We went to buy some pot  noodles for dinner as we had a kettle in the room, and did not want to chance the local eateries!

By 8pm all was very quite, the fountain turned off and the cattle marched through the town. I was intringued…. Although we did not have internet, i checked in my iPad, changing the manual time zone, from Astana to Novosibirsk. Bingo, we had changed time zone once again and did not realise for two days! Not that it mattered that much! We were now 7 hours ahead of the UK!
monday 23rd June – campsite in Altai – 234 miles
The house had a little cafe on the ground floor, where we had put our bikes for the night. It was closed to the public but the cook was there, preparing the food for the day. We  chanced it and managed to get fried eggs for breakfast!
After that we got the bikes out and left. We were now joining the main highway, the M52 that runs from Novosibirsk down to the Mongol border. 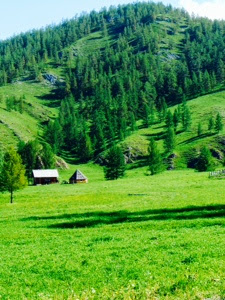 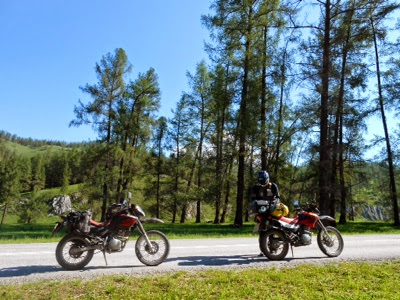 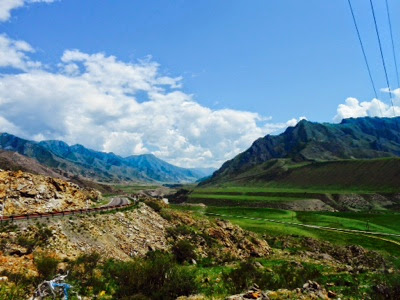 The ride there was spectacular, the Altai is definitely the most beautiful place we have been so far in this trip! 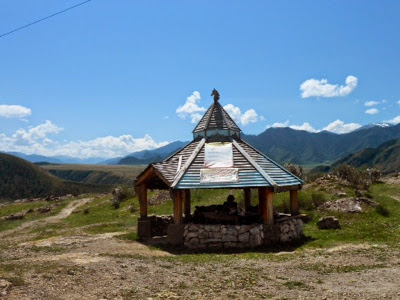 We stopped at midday, near to top of a mountain pass, for a bit of lunch, the end of our bread and the last tin of pate! That Russian dark brown bread was still fresh, i bet it would last till the next ice age! 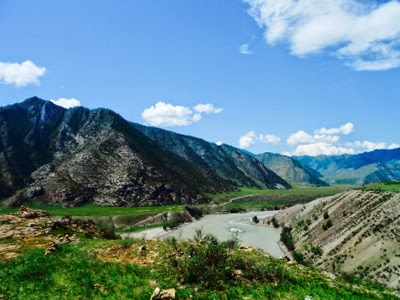 We wanted to get as close as possible to the border, and cross the next morning. Our map showed various towns along the way, all of the same size. If fact, as we went along, those villages were smaller and smaller.
By 5 pm, as the weather was turning stormy, we decided to turn back few miles. We had seen a sign for a campsite, and it was obvious we would not find any place to stay in the villages. We followed the sign as it took us off the road into a farm track up and down hills for a couple of miles, across a small river and into the camp! 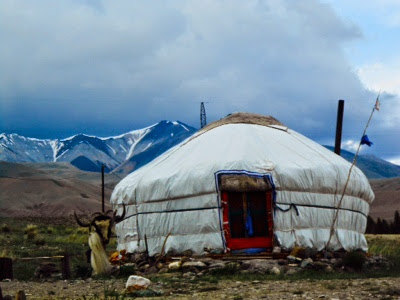 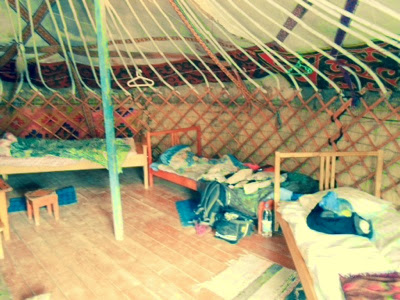 The site was a handful of gers, some small wood comstructions for the staffliving  quarters and kitchen, kennels, a banya, and the usual wodden hut on a wood platform with hole on the ground that constitutes a toilet in russia! 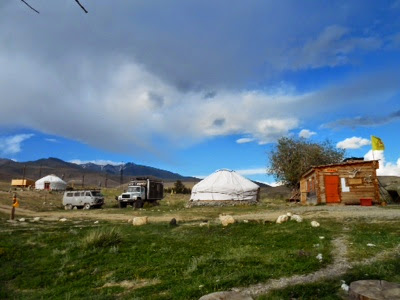 The yurts were almost fully booked, but Iga, the lad running the place, got us two beds in a gers of 6 beds. We would have to share!
The campsite was full of interesting people. Iga had two passions, Capoeira, and racing in dog sleds. For this purpose, he had lots of dogs. Running free we had two white Siberian Samoyeds, a couple of huskies, and in the kennels he had two Alaskan Malamutes and two more huskies. 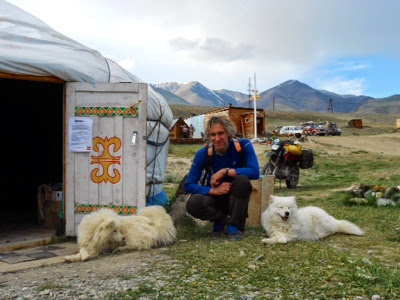 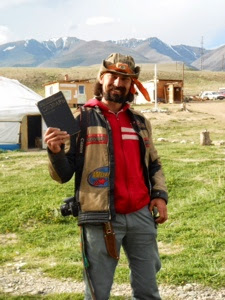 We went to see one of the Malamute, it was enormous at only 9 months old. Next to it the
Husky looked like a miniature dog! The Malamute had also incredible strength ! 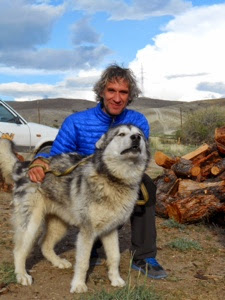 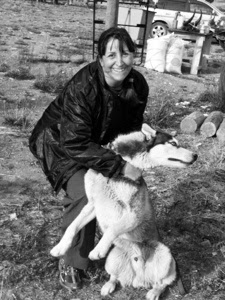 Iga’s dream is to race his dogs in Alaska and visit Rio! I hope he get to do both! 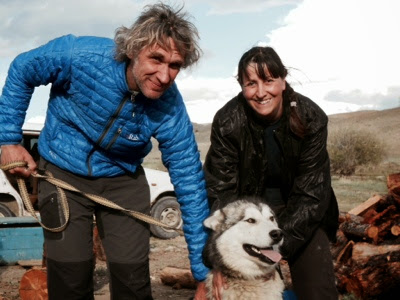 Iga told us that three bikers had booked a gers for the night. We wondered if it would be our moldovian friends on their way back from Mongolia….. In fact it was three russians bikers.
As we finished our dinner, they came in the gers that was used as dinning room, and invited us  to join them to drink some (excellent!) russian Cognac!
That is how we met Pawel, who was very quiet, Anton, an IT programmer and Vladimir, a giant motocross racer. Anton spoke very good english and did the translation.
They were from the Altai and were travelling few days on their bikes.
We spent a long time talking. Vladimir wanted to start a business organising motocross tours around the Altai. We thought it was a brilliant idea and he could make a good business and good money by doing tours. We told him about Patrick in Osh and how much he charges to rent bikes ( expensive!)… But the reaction of Vladimir was interesting and humbling. His goal was not to make big profit but promote and bring more motocross events into the Altai and getting more people interested in his  passion.
Vladimir: 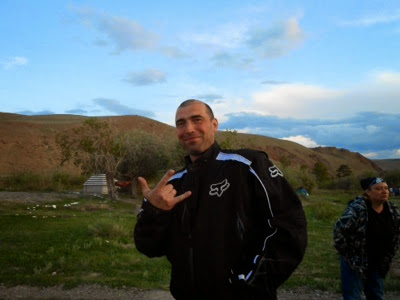 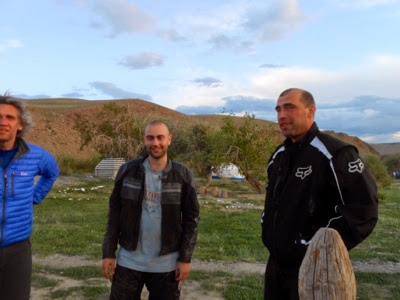 It is good to see that not everyone is interested in material success, and outside of the west, the cultures can be very differents! I hope Vladimir gets his business going, i told him he had to get some low bikes for the occasional short riders (me!)…. It would be cool to come back and explore the Altai with Vladimir and his inside knowledge of the region! Definitely something to keep in mind! And I could improve a lot om my offroad skills too with such a master!
Incidentally, they did not look down on us, travelling on our little 125 cc bikes, as they themselves were on 250s! Vladimir did not see the point of anything bigger or heavier than 250 for travelling. Anything bigger would be too fragile and heavy!
Tuesday 24th of June – 126 miles – Mongolia, Olgii
We left before our new friend woke up. We got to the border by late morning and it took 2 1/2 hours to get out of Russia!
We had to get through four peoples who in turn, each i n their desk would enter all our details intoa  computer! The height of inefficiency!
We then rode the 20 kms to the Mongol side.
The proof! The sign says Mongolia in cyrillic! 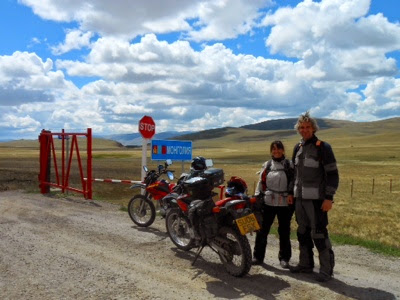 It took only 20 minutes to get through. On arrival before the Mongol borde compound, we had to get through decontamination! W paid 50 rouble each to geta lady vaguely spray a bit of water on one side of our wheels! What’s the point of that?
We then rode all the way to Olgii, througha  mixt or tarmac, gravel and deviations across cross country!
We avoided many marmots set on commiting suicide by getting caught on our wheels!