We went to get some fuel and rode to the ferry terminal by late morning. It was a massive ferry and we got a nice cabine actually, tiny but fine. We had previously bought some food for the 24h trip at a  super market.
Then we went for a beer at one of the ferry’s bar, because that’s what you do on a ferry! 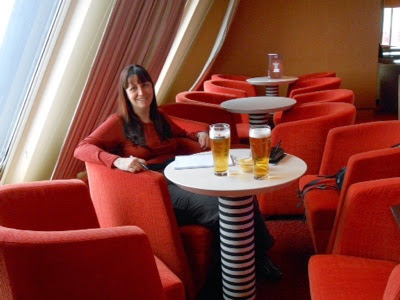 Monday 28th April – 138 miles
We arrived at Patras at 2:30 and we lost another hour to time travel! Another hour forward for our watches!
We managed with a bit of effort, due to no road signs, to find our way out of town and into the main road to Athen and Pirreus. One day it will be a nice motorway, for now it was only dual carriage way with hard shoulders,a nd 70 miles of road work…a lthough we only saw two tiny teams working for all that distance… We did as the locals and got out of the way of very fast cars by riding on the hard shoulder! We eventually found Pirreus and the ferry terminal and ensured a connection to Turkey, via the Island of Chios.
The first fery was leaving at 9 pm so we had time for a stogy gyros.  We then rode to the ferry. This time i could not bother take off the soft panniers. We took few essentials for a shower and left the rest hoping no one will steal our dirty clothes!
We had a “luxury cabin” as duals were all full and we could only have shared same sex ones! For 14 euros more we expected just the same tiny cabin than the ferry before, but with some window? Well, wrong, it was huge! It even had a large bath! 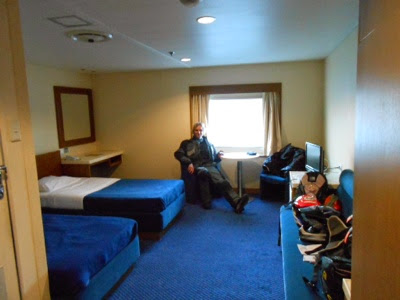 Tuesday 29th April – 117 miles
The ferry was due at Chios at 5am and we ahd a wake up call at 3:45!
We were out by 5 am and we found a coffee open. We crashed there until 7 am. We could not see any other ferry. We eventually made some enquiries and were told to go to the other side of the terminal! Go figure!
Anyway, we found our connecting ferry. It was leaving at 8:30 so we had plenty of time. This ferry was tiny though. Ther was a big struggle, by the crew, to fit a car and a camper van. The camper van very nearly didn’t make it and the driver and passenge were stuck in the van once parked inside the ferry! 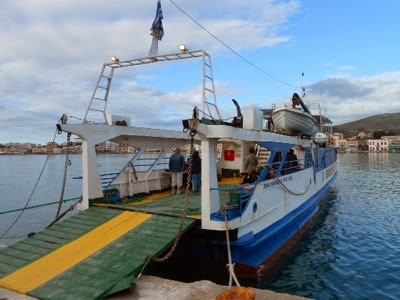 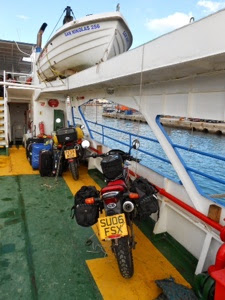 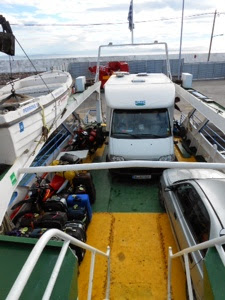 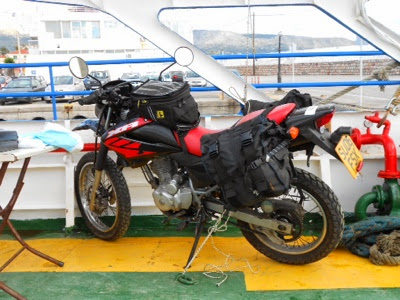 The crossing was only 18km so it was done under an hour.
After that we dealt with the passports. We then had to walk to the insurance office, in the town centre to get insurance for the bikes.
All in all it took maybe an hour to get to Cesme: 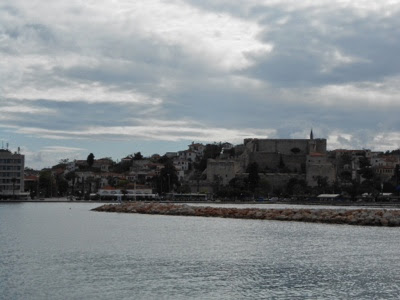 Once the bikes were released by custom we were on our way for a late brunch. By then it was 11 am and we had been up for hours!
The staff at the border control was really friendly and helpful.
Then it was time to hit the road. We passed Izmir with great difficulty due to lack of map, unreliable Gps and terrible drivers.
Turkish people are reallynice and   friendly, but, like in brazil, they turn into maniacs behind a wheel.
It was a stressful moment. We survived and got out of town and into the road to Ankara ( that we intend to avoid!).
Tired after such a long day we arrived at a little town, found a nice cheap hotel. Sadly none of the hotels we found had parking but we were assured it would be fine to leave the bikes on the pavement.
Time will tell!

The road to Mongolia

into the wilderness: western Mongolia – Part 2