We left Almaty after breakfast. Then we got on the road, straight north.
Now you must be wondering, we ride south, to Kyrgyz, then east to the border, then west again to Almaty, then North again! Why all those up and down, zigzags?
Well, first, if you visit Kazakhstan, you must register with the police within 5 days or risk huge fines and big problems. If you arrive by plane, it is done at the airport, if you arrive by land, like us…. You have to get to a big town to do it, unless you are totally sure you can get out of Kazakhstan within 5 days!
Also, Mongolia does not share a border with Kazakh or Kyrgyz, only Russia or China. Granted, via China would be a tremendous shortcut…. But it is sadly impossible to get into china with a motor vehicle. You need a guide, and the cost goes into the thousands of dollars. Only large groups can do so! For lone travellers like us, the only option is get via Russia… So north it is again!
The road north was just a masssive constant roadworks, so it was slow going. By the end of the day ,we  stopped ata  surprisingly pleasant town for the night. As we had a look around, we saw many girls  wearing long dresses and guys in suits, getting their pictures taken ….We thought first that it was a wedding, but on second inspection it looked more like a highschool graduation event! 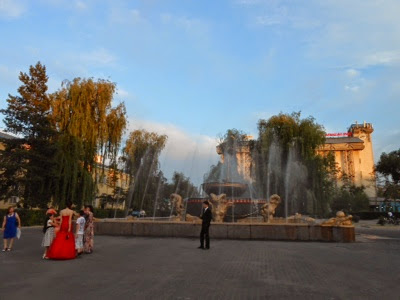 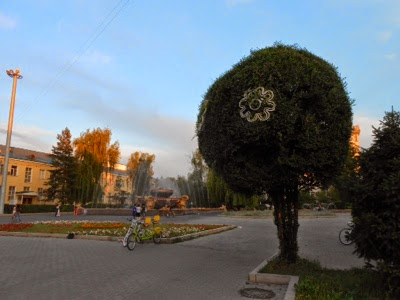 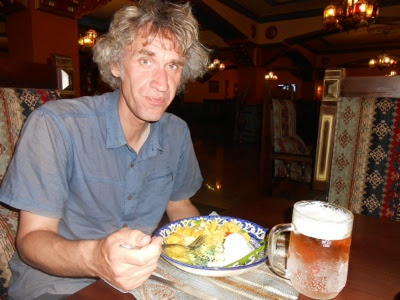 Thursday 19th of June – 331 miles – Ayazov
We left early as we had a long day ahead. Between Taldikorgan and Ayazov, there was no town, only desert. At least the roadworks were over and we managed to get to ayazov by daylight. 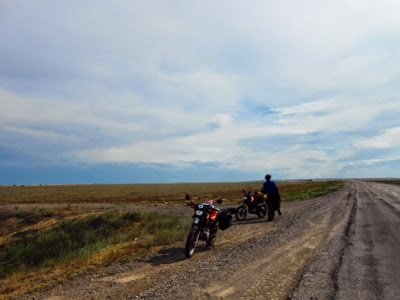 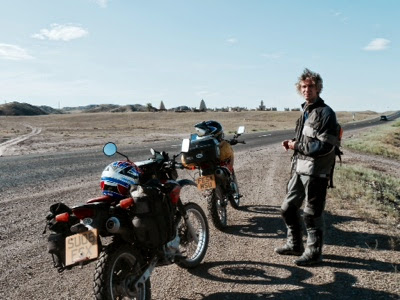 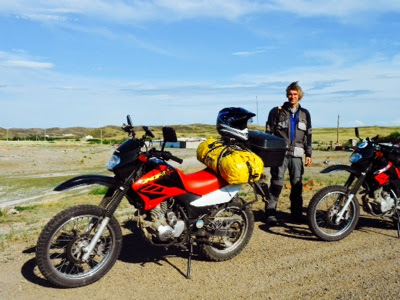 The town was some sort of military camp, maybe big prison, and an ugly town.
We stopped near a shop to ask for a hotel. A guy told us about a place near the train station, another guy, in his car, told us to follow him. He took us to a hotel. However, the owner of the hotel wanted 10,000 tenge, about 55 dollars, very expensive for such a dump town. Id on’t like to be takenf or an idiot and I made it clear! The hotel owner dropped his price to 7,000 but we moved pn. We found the hotel near the station. From the outside it looked like a soviet style dump! I went in and a nice lady showed me a huge room, with a private bathroom, andit even had hot water. Ok the place was outdated, the pumbing beyond dodgy and the flooring and all workmanship like done by 5 year old… But it was ok. For 5,000 tenge it was more reasonable!
After dining in our room with some pasties and peanuts, we went out to buy some ice cream.
The shopkeepers asked about us, and when i went to pay, with my change, they gave us a chocolate bar! 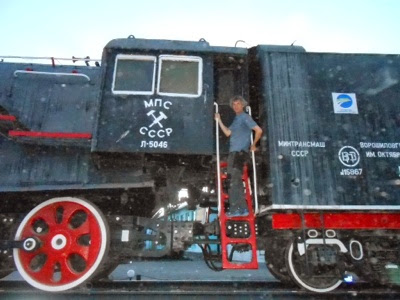 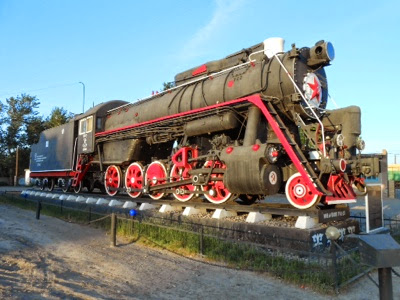 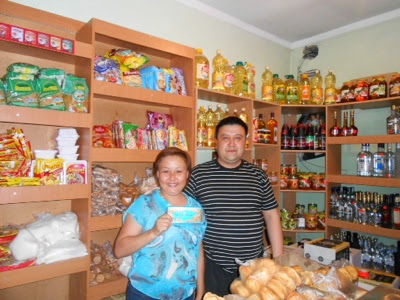 Friday 20th of June – 205 miles – Oskemen
We had decided to avoid the main border crossing between Kazakhstan and Russia, on that side, and aim instead for a little border further east. The reason for that was to avoid the long ride through busy highways, and take a shortcut across Russian Altai region, using little roads and lanes, cutting off a good 500 kms detour! Sounded like a good idea!
So we left Ayazov early, as we had no breakfast, and made it to Oskemen, which was only 80km from the border. The town was big and people there looked decidedly russian rather than ethnic Kazakh… We were close to russia.
We found a supermarket and bought some food as we would need to camp in The Altai. We picked some pot noodles and bread and pate, as well as some dried fruits.
Saturday 21st of June – 220 miles – Altai region
The breakfast at the hotel was beyond vile and i only managed to drink my coffee and eat some bread! We then got to the border late morning. The crossing was fairly fast. Afterthat we   rode few miles and stopped at a bus shelter. There we had some lunch of bread and pate. We then got on the road.
The region was agricultural and we crossed many small villages, along big valleys and gentle hills. 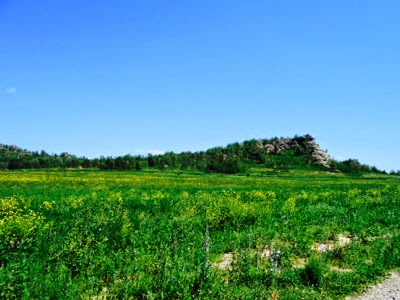 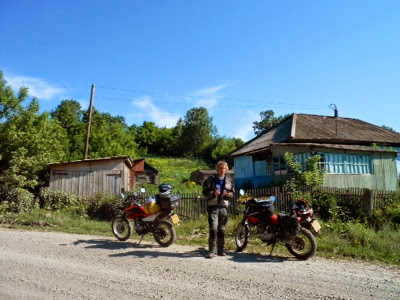 The roads at first were alsphated, but the  it turned into gravel and tracks.
As the day went on, we started looking for a spot away from the road, to set camp. We wanted to gets ome shade but the only trees were in the villages.
Eventually we took a farm track and rode up a couple of hills. We set our camp there.
As soon as we got off the bikes, the mosquitoes came out! They were the size of a jumbo jet, million of them, and very hungry! 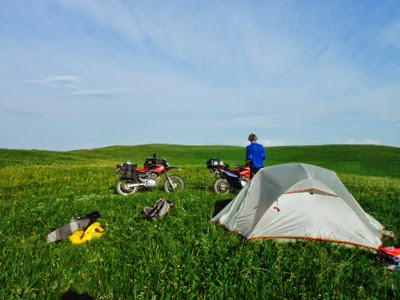 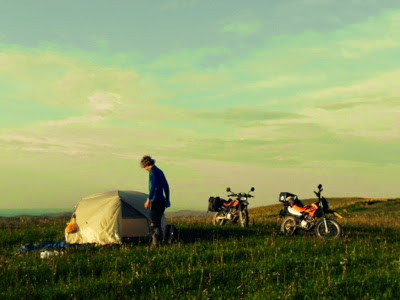 We managed to get a dinner of poot noodles and biscuits before taking refuge in our tent. By 8:30 we were inside, with the mosquitoes trying to find a way in!
Sunday 22d June – 155 miles – Ust Kan
By 4 am it was already light. My mattress was in some sort of lateral slope and I could not sleep well.
Soon before 6am i had enough and got up.
Mosquitoes were still around. We had a quick breakfast, packed everything, and were on the road by 6:45!
For a sunday morning, there were quite few cars around, so early!
We continued in our shortcut, with the road turning occasionally into a river bed! lucky our bikes are designed for that sort of terrain! 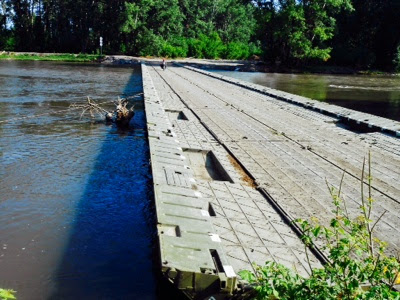 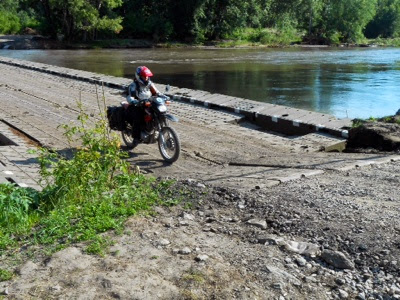 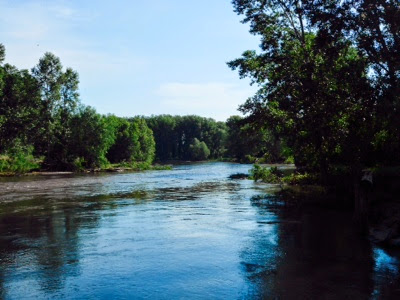 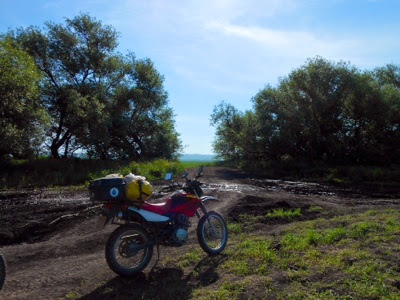 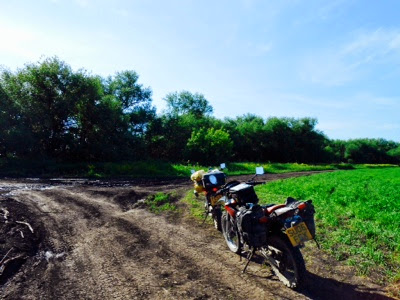 The ride was stunning, but we got rattled and shaken to death on those bad trails! 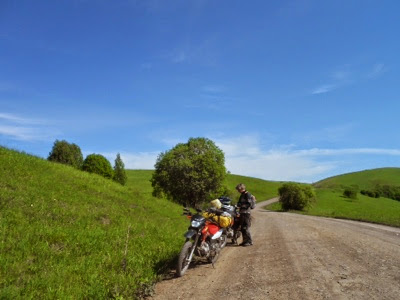 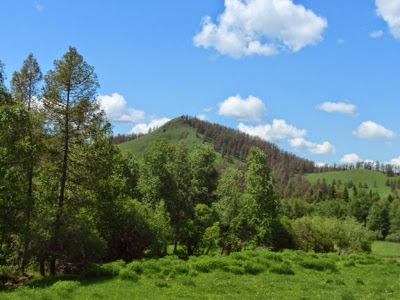 Bymid afternoon, very tired, we arrived at the little town of Ust Kan, we even found a hotel of sort!

It had a feel of far west on it, with the cattle being marched through town at dusk! 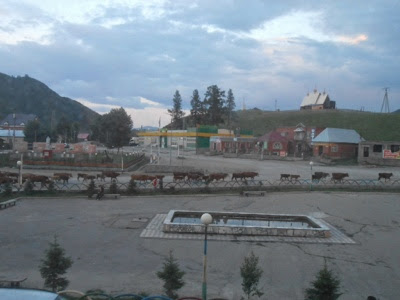