Skip to content
Sat. 3rd May – 223 miles.
We left Niksar, a pleasant little town, nestled around a canyon, with steep streets and stunning views over the mountains. Turkey has been awesome so far and people very hospitable. 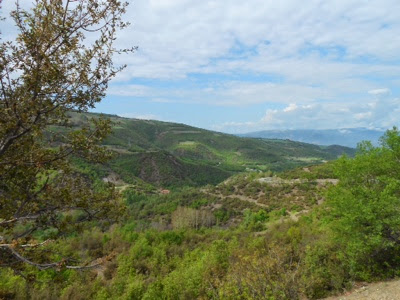 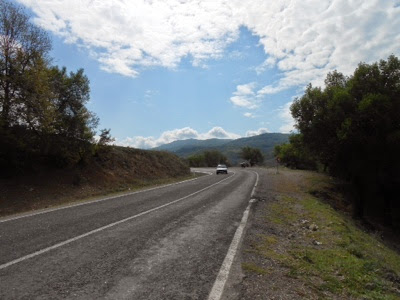 We picked up the mountain road, and up we went again. Once again it got colder and colder as we climbed the mountains, only to warm up a bit as we got down the valleys. We passed many villages. 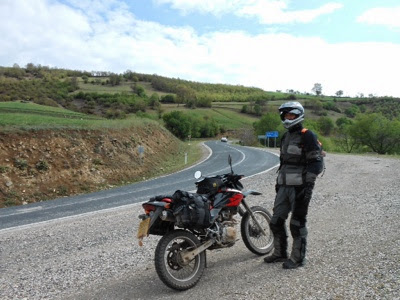 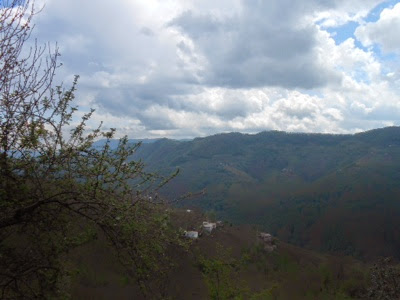 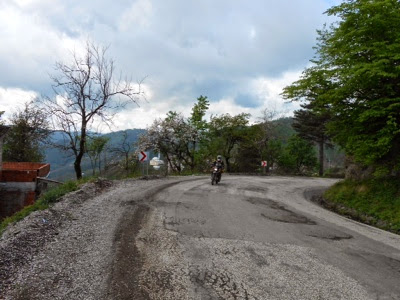 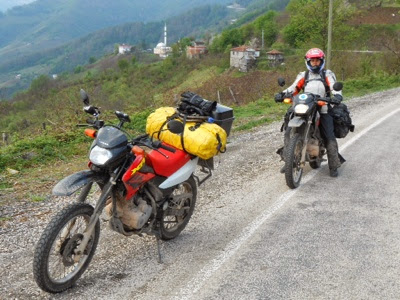 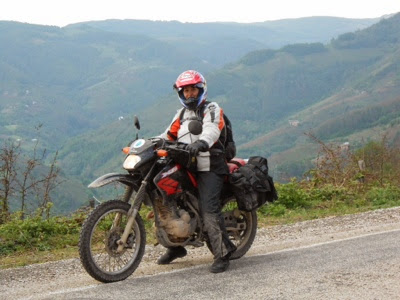 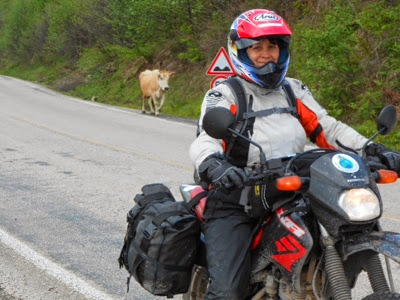 Then a tunnel, the wind is so chilly, i think we are still at altitude, but no, on the other side, the black sea. It is barely 16 degrees…. I expected semi tropical weather!
From there on the road is unbelievably dull, a 4 lanes road along the seaside.
Very strange as this sort of motorway is  barely 50m from the sea, so anyone living there has to cross or use one of the rare underpass…. I guess there is no tradition of going to the beach!
We try to find a hotel in Trabzon, at the end of the day, but get caught up in crazy traffic. People jumping in front of me, vans trying to crush me against another van…. It is insane.. I shout at few drivers, using plenty of F words and things to do with their mothers that cannot be written here !!!
We get out of town and find a hotel by the side of the road.
Sunday 4th of May – 109 miles
At breakfast in the morning we see few men and 2 girls. The girls have about 6 inch heels, very heavy make up, hair extensions and clothes that hookers would blush to wear…. I think they are hookers… Turkish women wear occidental clothes but not like that! Alistair is not so sure…. So night in a  knocking shop then!? Ha!
Back on the road we decide to find a place near the border and do some washing, as, funny enough the weather has suddenly warmed up and become humid! It’s 23 degrees!!
We find a place in Hopa and do some laundry in the bathroom. We then have a look around town to check if we can find a sheepskin! We fail but have a nice walk around and  a nice lunch. 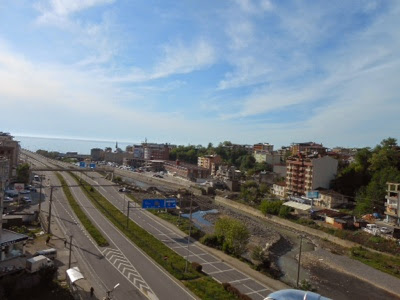 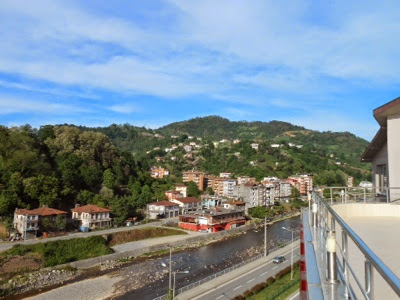 People less friendly by the black sea, although when we stopped for lunch yesterday, a man and hismother  came to see us. He said his mother saw the bikes and she wanted to say hello. She gave me a hug and a kiss! She seemed pleased to meet us! Nice people.
Monday 4th of May – mileage not noted …..
Strange day today!
We set off to the border, it was quite busy but we got through in about an hour. We had a long wait at custom behind lots of lorries and buses. Eventually we were in! We stopped just after the Georgian custom to change our turkish liras and get some cash from the ATM machines.
The weather had turned semi tropical…  It got up to 33 degrees…
Then we decided to take a nice road across the mountains, instead of the main road.
The road surface was pretty bad and then cows are left free to roam so we had to be very careful to avoid them, as well as giant potholes and cars stopping randomly on the road, usually after a bend! 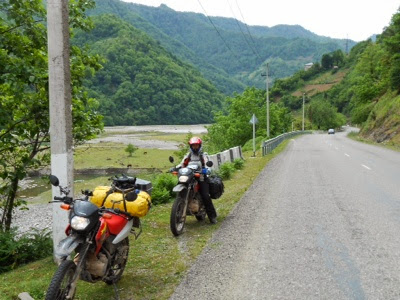 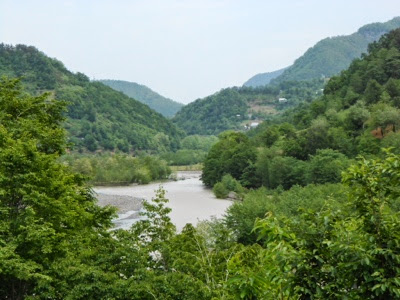 We stopped for some lunch at a cafe. We asked some stuff from what we could understand on the menu but the woman there just seemed to bring ramdom things. When i said in russian harashow ( good) she gave me a big hug. Not sure why all matronly women these days want to hug me! Maybe I am getting cute with age? 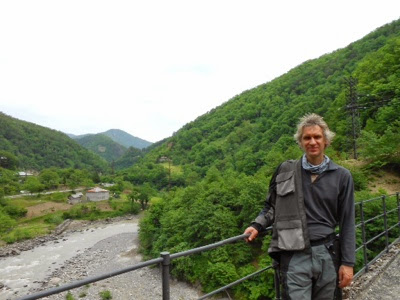 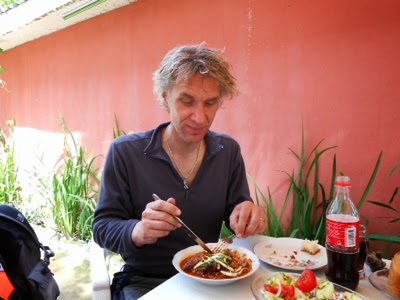 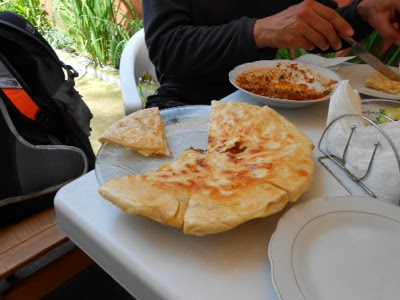 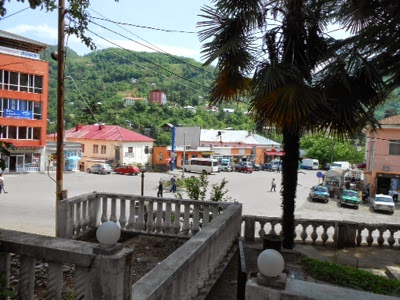 Then we continued. We must have done about 65 miles and arrived at a small town. There was a very big square with lots of mini vans and taxis and lots and lots of men waiting around.

We stopped to get some water, then tried to continued. After many roads ending as dead end,we  found one going up the mountains…. For several miles… Until it ended, you guess it, as a dead end too. 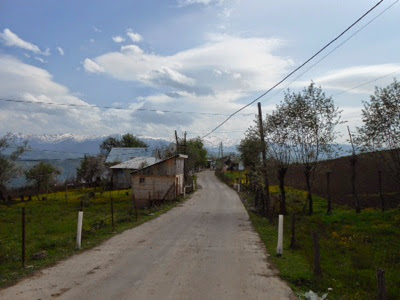 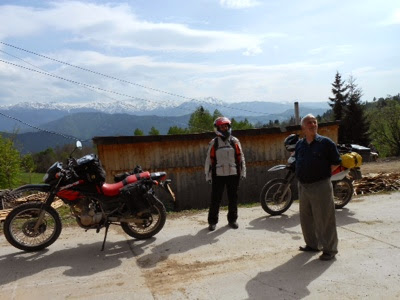 The local farmers came to enqurie and try to help but we had to turn round. Bck to town we tried again but, from what we understood from some people trying to help us, the road was unterrupted or unpaved.
We could not find the right road. Another trail going out of town was blocked by a truck and did not look good. 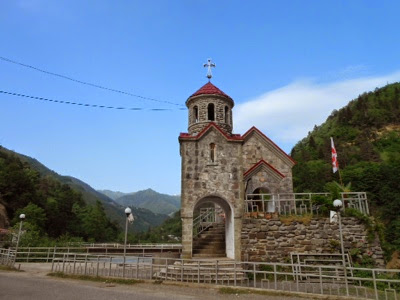 We gave up and came back to Batumi for the night.
Oh and we lost another hour to time travel!