With a broken down motorbike, in the middle of nowhere, we did not have many options.

“Let’s stop a truck” I said. And I positioned myself by the  side of the road. A couple of trucks came through but did not stop. People in cars just stared at us. There are virtually no motorbikes in Uzbekistan.
Then, after about 15 minutes, an old Lada, with a policeman at the back, stopped. With my little russian i managed to explain the situation.
The Cop took charge of the operation. Within minutes, a massive truck, those that transport up to 7 or 8 cars or vans, was approching, with the trailer empty. The cop made sign to the truck to stop.
The beauty of a police state is that there are cops everywhere and people do what the cops say! So the truck stopped.
The driver and a passenger came out and in few minutes, both bikes were loaded on the back!
There is a big General Motors assembly factory in Andijan, so the truck was going there. 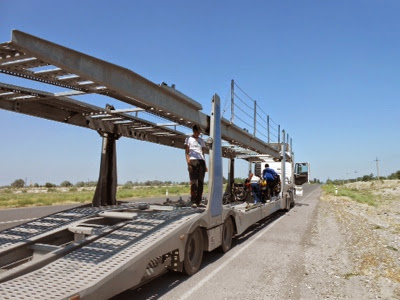 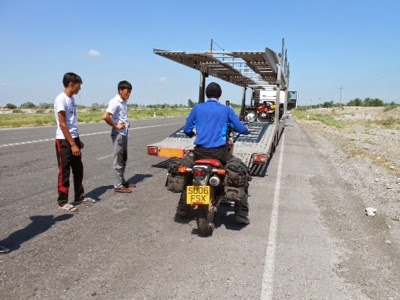 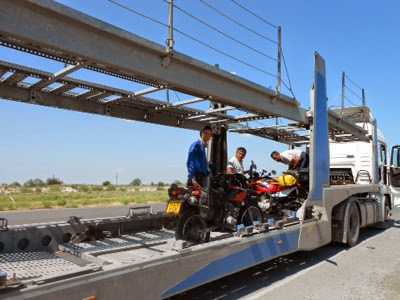 Andijan was the nearest big town ( still a good 80 miles drive fromwhere we   were) but close to the border with Kyrgysztan ( about 40 miles).
We stopped on the way, to wash the truck, in my opinion more so that the driver would have a nice rest, tea , and catch up with his truckers mates!
We were offered tea and rook some pictures. 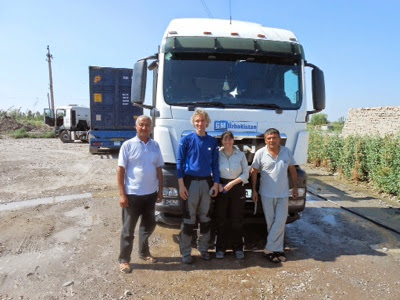 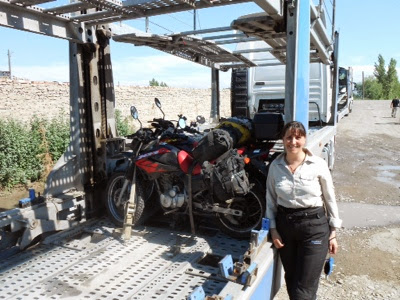 Then by late afternoon, the truck left us near the airport, as it was too massive to get into town.
We pushed the bike in the shade. I asked some cops ( they are everywhere) where was the nearest hotel. Alistair took my bike to ride and check it out. After a while he came back on foot. We then walked to the hotel, with Alistair pushing his bike for a couple of miles.
The place was a dirty dump, in the edge of town, but we did not have any choice. It was almost 7 pm by then. The hotel did not have wifi and the nearest internet cafe was quite far. We took a taxi, and once online, i made some enquiries on the HorizonsUnlimited forums. I had also the details of a swiss guy called Patrick, who runs bike tours and hiking, from Osh (in Kyrgysztan) just on the other side of the border!
So I knew there would be a competent motorcycle mechanic in Osh. We just needed to Get to The Border! I sent an email to Patrick.
By then it was late and we went to sleep.
Sunday 1st June – 0 miles – Andijan
The next morning we moved to a more central hotel, with wifi and near facilities. Poor Alistair had to push his bike for several miles!
The  wifi in the hotel did not work! At least we had an internet cafe next door.
Patrick, from Osh, would be able to come pick up the bike at the border, Kyrgyz side. Osh is only 5km from the border.
We just needed  to arrange a truck to take us there!
We explained the situation to the staff of the hotel. They told us it would be very easy to get a taxi, as there were plenty congregating at the end   of the street. We walked there. There were only cars….
When we got back to the hotel the guy told us it was not a problem, that we could put the motorbike on the roof of a saloon car! We explained it was NOT possible. That we needed a truck. He phoned his mates but it looked like it would go nowhere….
Alistair, when he brought his bike, noticed a white good shop with a small delivery truck. The ideal truck. So we walked there to investigate. We talked and explained, and after a while, going back to the hotel to get the staff to translate the details,  it was arranged that the truck would come to collect us at 10am the next day.
Monday 2d of June –
The next morning we were ready and all packed up by 9:30. Came 10am, no truck. After 15 minutes wait we asked the staff to try and call the mobile number we had. It was switched off! Not good!
It was clear no truck would come.
We went back to the taxis area, asking where we could rent a truck but had no luck.
Back to the hotel, it was a different team from the previous day. We explained again what we wanted. I asked them to write down  in Uzbek that we wanted to hire a truck to take our bike to the border.
There were various discussions bewteen the staff but not much going on.After a   while i pointed at my paper and eventually the receptionist wrote the translation. Then by late morning he told us there was a big parking area for small trucks a mile down  a street. Why no one told us that before!!!
Get to the border!!!!!
I walked outside with my piece of paper, under heavy rain again. We crossed the road and walked along the street . I then spotted a small truck, empty, the driver inside,smoking a cigarette. I went straight to him. He looked at me as if i was some mad woman, i must have looked the part! I put my piece of paper on the window.
We started talking. We agreed on 100 dollars if he would take us to the border right now! We went straight away to the hotel and loaded both bikes. We tought it would be easier that way, rather than trying to to follow a truck in insane traffic. Once out of town it was obvious the two bikes were falling. There were strapped, but without a ratchet, the bikes were falling, on those dreadful badly potholed roads. We got my bike out and Alistair rode it under the nasty rain. 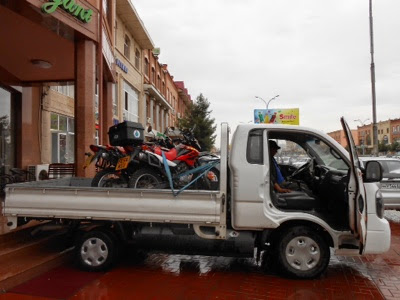 Eventually, by early afternoon, we got to the border!!!
It took over an hour of back and forth from one office to the other to get all sorted. The border was almost empty,very few   people crossing. One of the custom guys was so bored he asked if we had a  camera and watched pretty much all the photos i had on the memory card ( 100s of pictures!)…. He eventually got bored and we were finally let off Uzbekistan!
Entry to Kyrgysztan took about 10 minutes. Only one guy in an office, no paper work to fill! The most senior officer of the border control came to introduce himself and welcomed into his country! I am going to like Kyrgyzstan!
Once outside, we called Patrick, and about half an hour later he arrived in a pick up truck. He took us to his house, where he had a workshop and storage facilities for motorbikes.
Then his office manager took us to a guest house. We lost another hour ( we are now 5 hours ahead of the UK!). That very evening, Patrick and his mechanic took the engine apart. The diagnostic was bad.
The crankshaft and piston were dead. Those parts cannot be found in central asia. Alistair looked online for parts in the UK. It would be a lot of money! Not including DHL costand  import tax tec….Was it worth it? Was it the end of our trip?

Into the wilderness: western Mongolia – Part 1