The weather was less wild and we decided to finally leave Ulaanbataar! I was sick of pot noddles and could not wait to get back into Russia for a decent meal.
Two nights before, we tried a local restaurant, not far from our hotel, chinese food, so it would be easy  to order as each meal had a picture.  It looked popular with the locals. It was vile! Trust me, it was. Even the chicken had that texture of chicken that has been standing around for a very long time. Like all meat in Mongolia, it was well past its sell buy date.
So we  went back to pot noodles and sardines to survive. To be fair the russian sardines in tomato sauce were actually very tasty.
Anyhow, we  packed and rode to the border. The road was paved all the way, sort off, unless it was closed and we would end up in random tracks, trying to figure out which way to go, as usual.
By late afternoon we arrived at the border town of sukhbataar. We spent the night there, as the border is not 24/7. They rarely are in these regions.
For dinner as you may guess we had more sardines with bread!
Wednesday 9th of July – Ulan Ude – 171 miles
The border was only 25 km away, so we  got there on good time. There was already a queue. Getting out of Mongolia was a muddled affaire as it looked like they could not find my motorbike number plate in their computer records! Alistair blamed my very bad writing! I blamed incompetent officials!
After that we rode to the russian side. It took nearly 2 & 1/2 hours as they were thoroughly searching every car and minibus! I was expecting the same when it was our turn, but except the usual question “do you carry narcotics or weapons?” Which we always said no ( does anyone ever say  yes for the fun of it???) they waved us through. Mind you, with our minimalist luggage I really don’t know where we could hide any smuggling! 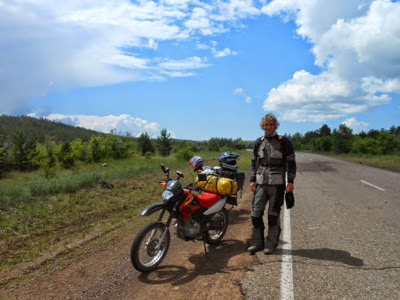 By then it was lunchtime so we  munched on ozone peanuts and apples. We pressed on to Ulan Ude through storms and hail, as it was quite a  long way. When we  got there, we found out we had lost another hour! I made a mistake in a previous post, in UB we were 7 hours ahead of the Uk, now we were 8h ahead!
After turning a bit we finally found a hotel. They even did a registration for two days, although we  were only staying one night! So registration was now out of the way! In Russia, foreigners must register with the authorities within 7 days. Some hotels can do it, else it is complicated. And no registration means problems at the border when leaving!
Then we went for a meal. We found some chinese / Japanese restaurant ( lots of those around!) and we had a great meal! Food that was tasty, edible and no dodgy meat! Result!
Thursday 10th of July – 206 miles – Utulik , by lake Baikal.
Alistair had found a nice guesthouse on airbnb.com and booked a room. Unfortunately, they could only give us a room for one night only! The weather was better, the road beautiful, up and down big hills, twisty roads, nice views of the lake…. Utulik was a holiday resort with lots of chalets for tourist. Ours was already fully booked. It was nice as we had full use of the kitchen and a huge bedroom and bathroom.
The owners told us that Utulik was a ski resort in the winter, and we   could take the ski lift for nice views of the lake. The added bonus was that the bottom of the ski lift was being taken over by bikers for a large international bikers meeting that weekend.
So we rode there and were greeted by the bikers meeting organisers. It was not busy yet as it was only thursday and most people would come Friday evening only. The greetings entailed a small plastic glass containing a tiny bit of Russian brandy, that we had to drink with our helmets on ( not easy!) and eating a  small piece of pickle! Again with gloves on, not an easy task!
We managed then to get up the ski lift, although it was closed already, but with the help of the chalet owner who appeared suddenly there, we  got in and up! Russia is a bit like Brazil… There is always a way!
So we got on the ski lift but had to stay on  and down immediately as we were not allowed out at the top. Had few pictures though!
Greetings committee! 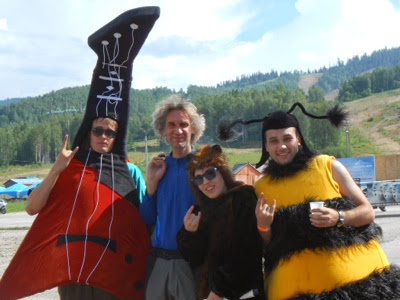 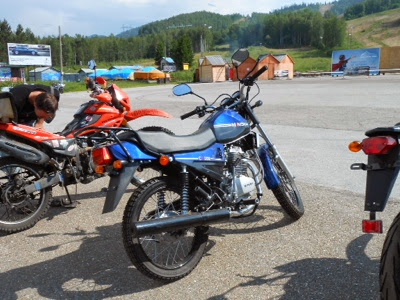 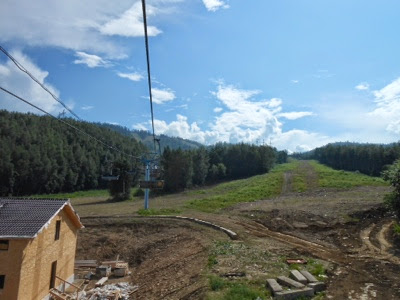 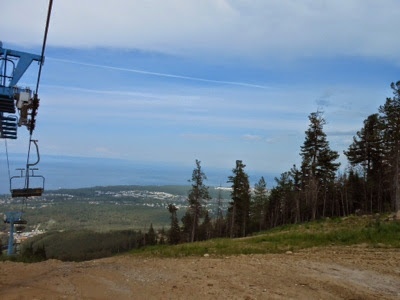 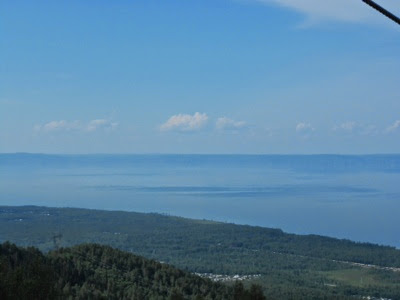 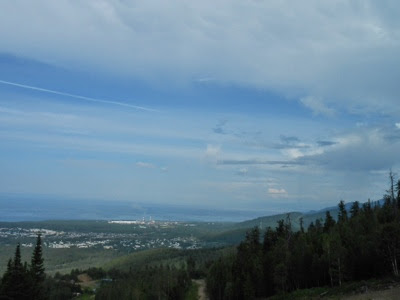 After that we rode back to the chalet and had a walk to the edge of the lake. 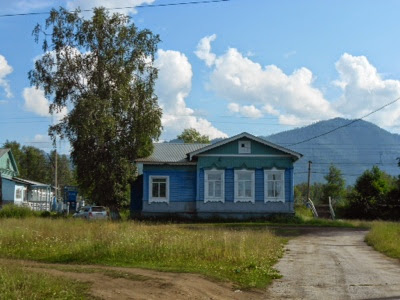 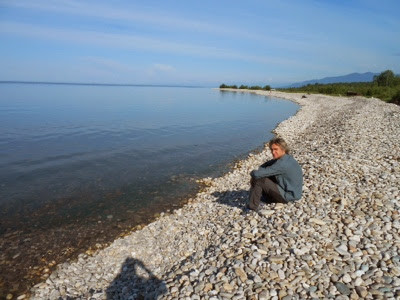 We then got back to the chalet for a simple dinner of … Sardines and bread, as there was nowhere to have food!

Friday 11th of July – about 100 miles – Irkutsk
We left early. We had found a home stay in Irkutsk, via airbnb.com. It was a retired lady, who was also ready to help us to organise the transport of the bikes on the train to Moscow, i.e. Do some translation for us!
When we got there early afternoon, in intense heat, we  found the street, the block of flats, the entry 6D, flat 7. Easy enough. Except that no one answered our calls at the street door. Strange, she knew we would be there early afternoon.
I tried other flats in that block asking if they know Tamara Home stay? Nope, neighbours said no one of that name was at 6D. Alistair went off trying to find wifi to send an email… And failed . I went to all other stairs trying all flats 7 with no luck… We gave up. Alistair went toward the station to look for a hotel and found one in front of the station.
So we rode there and walked straight away to the station. By then it was 4pm . We knew, through Tamara, that there was a train the next day ( the Saturday 12th) that could take the bikes. The next train would be the 18th only! We did not fancy spending a full week either in Irkutsk or Moscow waiting for the bikes!
I had details of Irkutsk station by a fellow biker, who transported his bike to Novosibirk the year before, and his instructions were spot on. We found the correct desk and organised the bikes quickly. We were told to bring them at 5pm to get them crated and they would be boarding the train the next day with us! So we  brought the bikes. There were  already 3 huge Finnish motorbikes being “crated”… Well sort of, some sort of nasty frame that would be useless as we would find out later on! 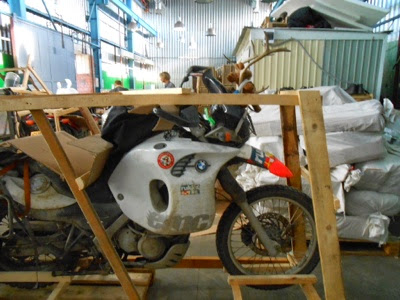 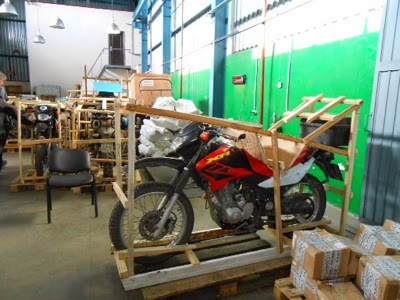 Anyhow, we were told to go back to the office the next day at 8 am to do the paper work, so we left the bikes and went back to the hotel.
As for Tamara? She lived at block 6G, flat 1! Not block 6D, flat 7 as she emailed us! Go figure!
Saturday 12th July  to Tuesday 15th –  transiberian
At 8am we were at the office and all paper work and tickets were done quickly.
The bikes were … Encased rather than crated… 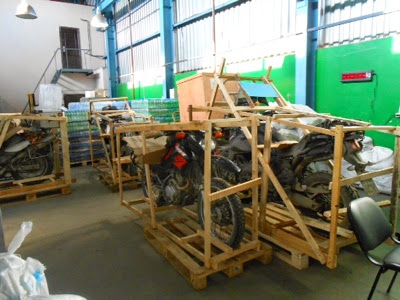 Then the guy in the warehouse told us we had to drain the fuel tank as there was too much fuel left! We did both bikes! We had half fuel tank and had to remove a lot…. 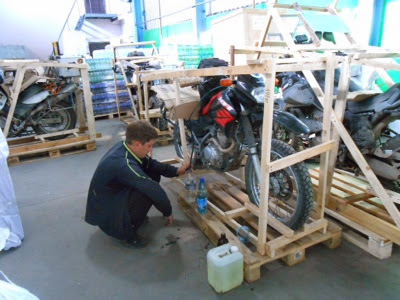 As we left the office, two german guys on two bikes turned up! It seems the train is an established route for motorcycle travellers now!
The train was leaving at 4pm… We asked the hotel if we could stay until two pm, but they asked another 1000 roubles for it, so we just went to a local restaurant, with air conditioning (it was very hot) and spent a long time there.
We then got on the train at 4pm. The train was scheduled at 11am… Moscow time! All trains are set to Moscow time, very strange  at first but it makes sense when you realise that Russia spans across 11 time zones!
We  saw no trace of either the three Finnish guys and the Germans, although we saw all 7 bikes being loaded into the train.
As the train was full, we had the two top bunk beds, not convenient as in this case you can not sit on the lower bed/ seat! So if you want to sit, you must go up to your bunk bed all the time. Not great! 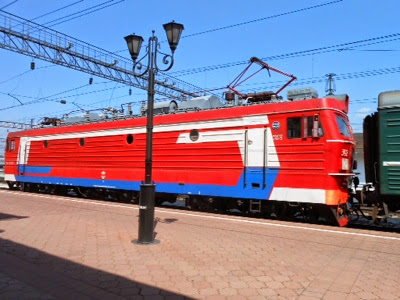 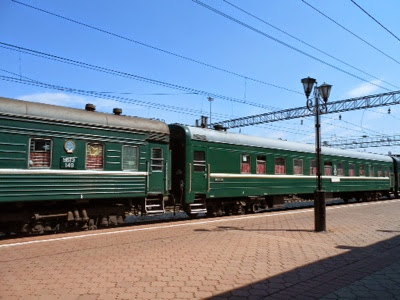 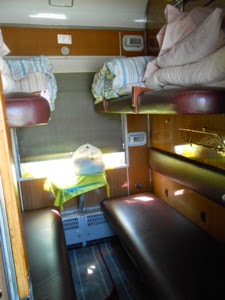 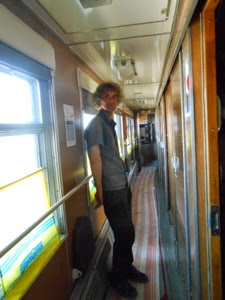 That was our world for 3 1/2 days! And the usual views for that period! 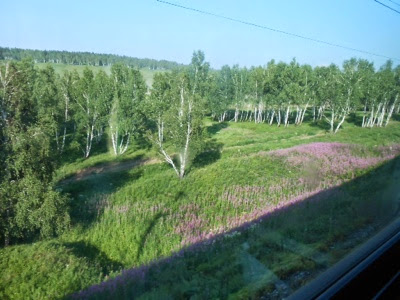 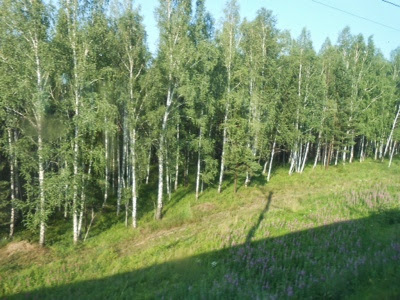 Then we found the restaurant! No one seemed to use it so we spent a lot of time sitting there! 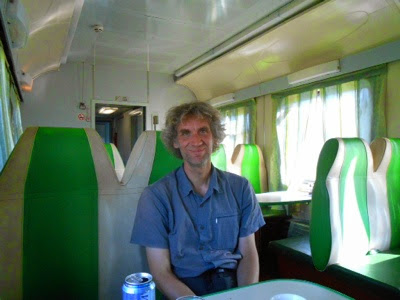 They even had beer, until they ran out. Mind you they ran out of lots of stuff over the three days! They do not seems to reload on stuff!
But at least the blond girl, Marina, working there was friendly and had a lovely smile (  on the right). And she even let us charge our iPads on the plugs behind the bar! 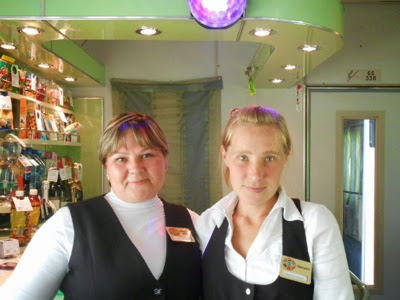 The train would stop every so often, and people would get off and some other would get on. On Monday evening, three guys got on next to our cabin. They were already a bit drunk. They joined us at the restaurant for a beer, then at the next stop got off to buy drinks and insisted on giving us vodka. I did not drink as I was not too well and don’t like spirits. Anyway, we spent few  entertaining hours with those guys.

Apparently they drive buses that go from Moscow to Vladivostok! 9000 km of it! They don’t go all the way but part of it, two drivers/ mechanics per coach, doing 12 hours each! Tough job. And who would travel in a  coach? Insane! But if you fancy it… More adventurous than the train! I think it takes 15 days but not sure! 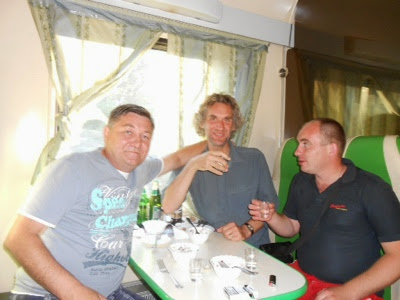 On Tuesday,after 78 hours on the train, we arrived at Moscow early afternoon.

We had planned to stay at a guesthouse but when we turned up it was full. After a lot of search, involving finding wifi to find local hotels, we found a hotel after 5pm.
After a quick change, as  we were on our motorcycle gears and carrying bags etc…we  got to the station. Finding the warehouse where the bikes were was a bit of a treasure hunt. Anyway, found it, but we were told to come back the next day!

Georgia and the road to nowhere