Skip to content
Saturday 28th of June – 154 miles
( apologies to my readers about the constant bad typing, very hard on an iPad, the blogger app gives me a tiny window and it would be so much easier with a real keyboard! )

And so we  left Ulaangom early, with no breakfast. We were aiming to camp by a lake. We were then in the district of Uvs. It means grass in Mongolia. Why? No clue as it is really only desert. The good news was that the exit of town and for about 80 miles was paved more or less. 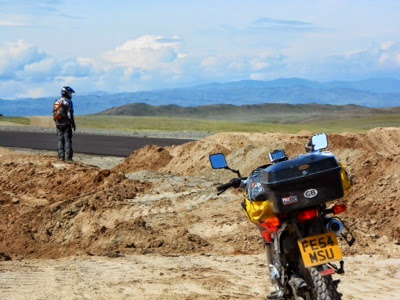 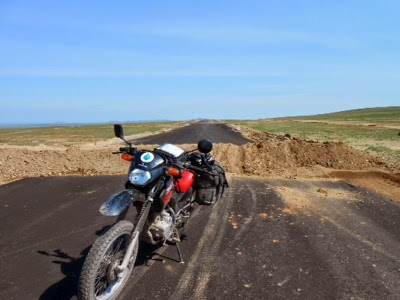 We wanted to find a specific trail and spot on the edge of the lake, called Khetsuu Khad,  where apparently there was a gers camp and   wonderful views.
We never found the junction or any trail going in the  right direction.
We rode that road back and forth several times, asked some road builders, could not make sense of the response ( pointing in all directions!). In the end we decided to ride cross country. The soil was not too bad, no ravines or high rocks, it was doable. By the time we reached the southern side of the lake, we realised that we would not have enough fuel to reach that gers camp and come back. So we  picked a spot by the lake and set camp. 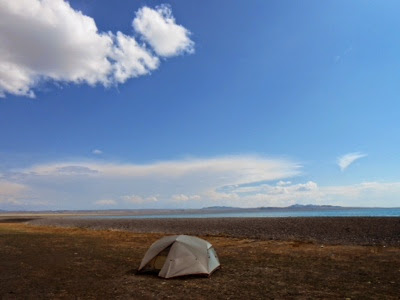 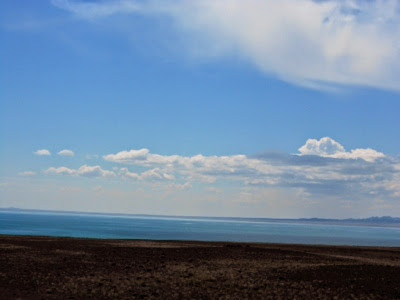 The place was like a desert, with funny looking lizards that had like a big sting on the tail, and raising them like a scorpion! I did not fancy one of those coming close to me! 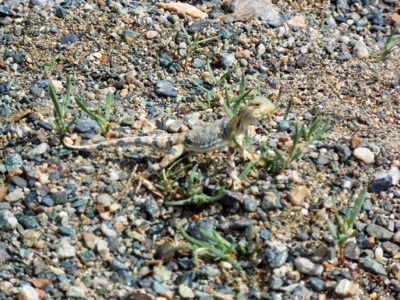 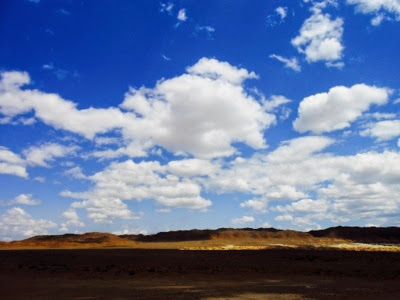 Sunday  29th of June – 185 miles
Concerned with fuel, we  consulted the map. It showed a village off a small trail. Our GPS did not show any road there. Once again we rode back and forth, asking for that village and fuel. Once again, we could not make sense of the answer, involving pointing in lots of different directions. If we  continued,  the next town on the main “road” was too far. So we decided to turn back on the paved road and ride back  about 55 miles to the last fuel pump.
At the same time we stop at the village shop to buy water and some food. 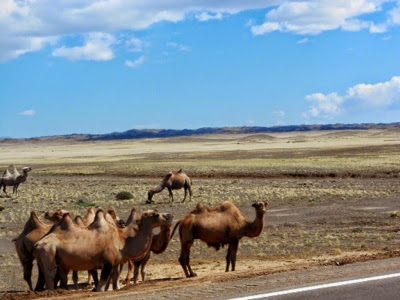 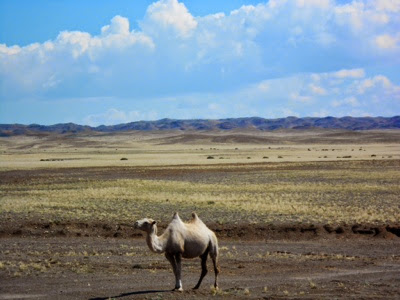 We filled also the fuel bladder, that gives us an extra 8 litres of fuel, as we were going to cross a very desolated area. It is called the Great depression. It deserved that name! By the time we got out of it few days later we were ourselves very depressed! 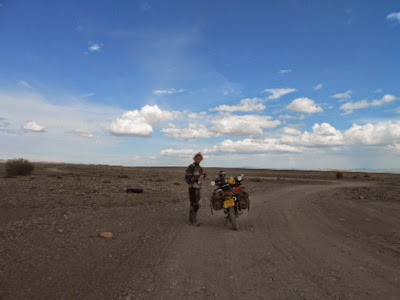 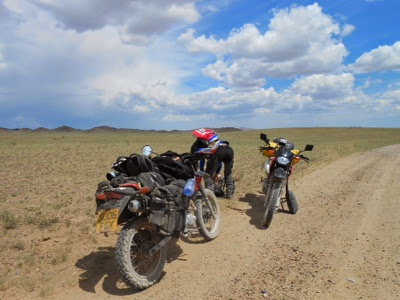 Anyway, at the village we were surrounded by two idiots touching everything on the bikes!
I kept saying in english ” yes it’ s a motorbike, it has two wheels, just like yours!” To no avail!
We then rode to the fuel pump and same circus again! We had a quick bite of bread with some spread, that looks like Nutella but comes in a swirl of neatly separated white and brown spread. By the end of the day the whole spread had mixed into chocolate colour, due to the tremendous vibrations and corrugation of the trails.
Then we rode the same road again, passing the end of the lake, running out of tarmac into horrendous tracks. They went from bad to worse. We looked for a side trail going north but once again never found it or any evidence of a track. We were glad not to insist as a sudden electric storm started, with massive lightenings coming down on the valley we had planned to cross. Those lightenings were frightening, especially as it is flat desert and the only thing sticking out is us on our bikes! 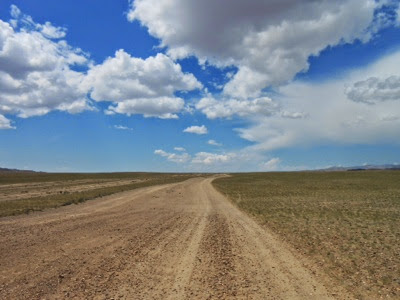 The tracks were going in all directions, many criss crossing, some running parallel, all bad, either very bad corrugation or sand. It was stressful and exhausting! In top of that the scenery was just desert, with nothinga round, not a gers camp, not a camel or a goat, nothing
We continued slowly for a long time until we got too tired.
We then rode away from the road to set camp. The next village was very far away.
As we set the tent and our inflatable mattresses,we  found out that one particular plant was very spiky! It pierced the tent floor in a couple of places! We had to empty the tent. We defined a square zone with my boots, and started a weeding job to remove all these herbs! Eventually it was done and we set the tent there. It was incredibly hot!
After our usual dinner of pot noodles, we set to rest, just to realise that my mattress was losing air fast! Big puncture. Some roots were going through the floor and punctured my mattress! After repairing the puncture, we used the plastic chopping board and my motorcycle winter gloves to isolate from those.
We finally set to sleep, although my mattress must have had another tiny puncture as  it lost air slowly and  I had tore inflate a couple of times overnight! 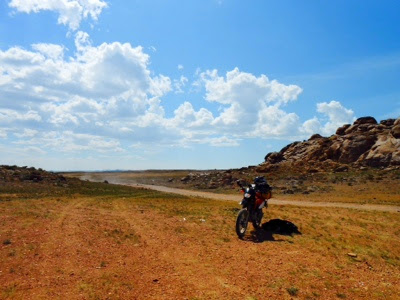 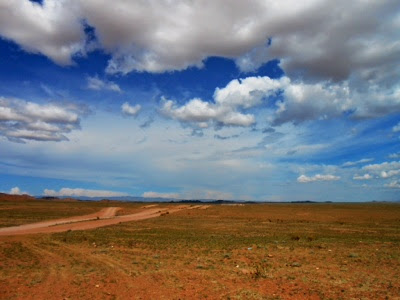 Monday 30th of June – 98 miles – Nomrog
We got up at 6 am as the sun was high already and it was too hot. By 7:30 we were back riding. We eventually crossed some valleys with some sign of life, few animals grazing, few rare gers.
We came across, in the middle of nowher, of a gers selling some drinks and providing food. We declined the food but had a couple of sodas, warm as they had no fridge!
As we sat in the Ger, on what was the unique  massive family bed, the family sat in front of us, on a sofa and two armchairs; the mother, the father, the teenage daughter and younger son, and another bloke, all staring at us, as if we were from outer space! Maybe for them we were! We were happy to be away from the sun in the shade for a while, but it was very uncomfortable having this group of people just staring at us! So we left. They all came out to stare at us! 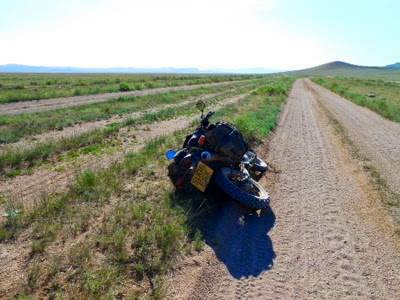 The tracks unfortunately got worse. With long sections of deep sand, and badly deformed tracks with huge deep holes and bumps all over the place.
We observed more storms and electrical storms once again! The views are so far away in these open spaces,  that you can observe several storms at the same time!
Through the day I dropped my bike three times in sand. It was exhausting. 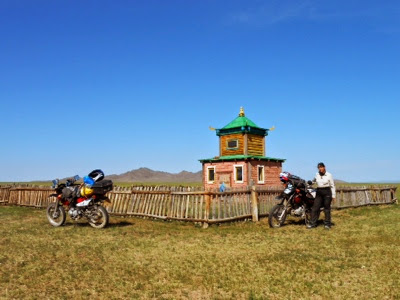 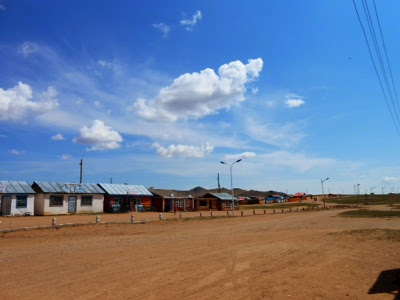 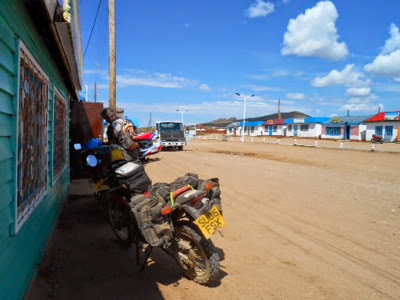 By mid afternoon we got to Nomrog, the first town since we last bought fuel! Town is a big name for what is only a single street!
Nomrog had a hotel, of sort. With no running water in town, there was no showers, bathroom and the toilet was outside, the usual wooden but, with a wooden platform, with one plank missing and a big hole! Using was filled me with dread but no choice!
We were too tired to continue so we decided to stay. At least we would be out of the sun. We cleaned ourselves with some Wetones, hoping for a shower the next day !
The hotel had a big kitchen and dining room, set like a restaurant, although it was completely deserted during our stay. Then upstairs there were several bedrooms. The owner showed us several rooms and we   picked one. The beds were made, usually guesthouses and hotels since Georgia, beds are unmade, maybe to show the bedding is clean? In this case I doubt it was.
As evidence, the next morning, the entire family emerged from one single bedroom, the son, two daughters, the mum and another lady, all sleeping in one bedroom! That was one of the bedroom the woman showed us. Then she made the beds there again and  I suppose the next traveller can sleep in there again! oh well, considering how dusty I was I just felt sorry for whoever sleep in my bed sheets next!
We observed that too later on in other guesthouses, where a full extended family, children various men and women will share a bedroom! I suppose in gers that is how family life is, everyone sleep in the same gers, sometimes in the same huge bed….. 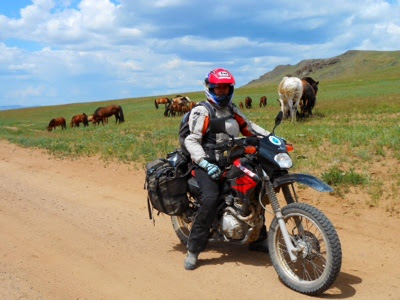 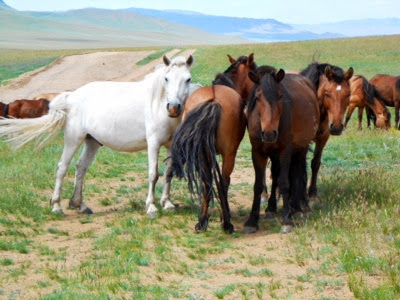