After a good night sleep we visited the dreadful pit (!) before trying to get some breakfast. We asked if we could get some eggs but the landlady said no! So we drank some fruit juice from the supermarket, and some bread with our mixed chocolate spread. We abandoned the rest of the bread…rock hard.
We left Nomrog soon after 9 am. From there we were really expecting to see some improvements with the road, after all, in our map, this section is now a ” major road”! It had been raining heavily during the night. I was hoping the sand would be compacted, making riding easier. Let’s just say it took us 5 hours to do 70 miles!
This below is actually a good section of road! Really! 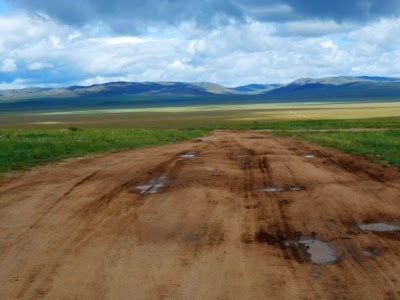 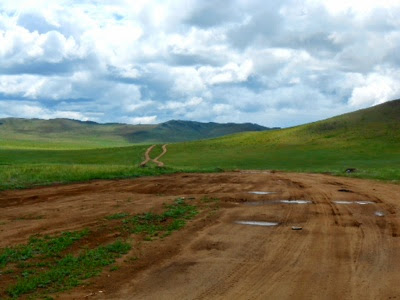 The road went from bad to worse, rivers, mud, sand, holes the size of a truck…. It was very had and very tiring! I don’t have any pictures of the hard parts, as I was too busy riding those and trying not to lose the will to live! 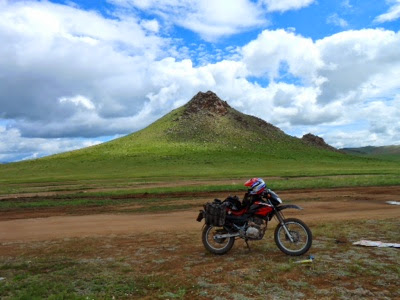 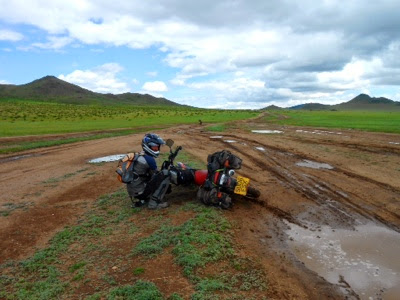 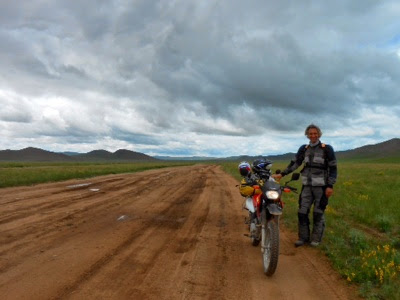 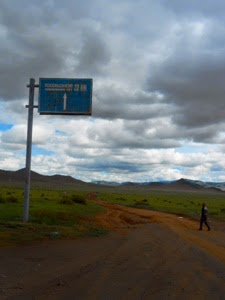 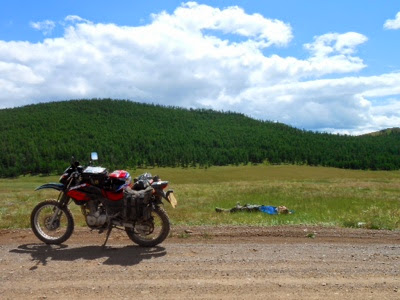 We got to Tosontsergel by 2:30 / 3pm…. Although…we  must have crossed some invisible portal as we lost another hour …. We were now 8 hours ahead of the UK, same time zone than Singapore and Beijin apparently!
This time we found two hotels in town. We had high hope of a hot shower and flushable toilet, after all this town is quite important… It even had an airport, according to my map!
Unfortunately, there was still no running water in town…. Only drafted from a  pump and brought home in containers…. So facilities were the same… No shower and the dreaded pit toilet!  We picked the less dodgy looking hotel. Downstairs they had a restaurant, and they even served food there! We managed to get fried eggs and rice! That was quite a nice change from our usual diet!
After that we went to look for the local “supermarket” ( well, that would be the village shop for you and me!).
We met two bikers, a couple from Poland, riding two up on a massive BMW 1200 GS with tons of luggage and stuff ( that is a very big motorbike for those non biker reading this! )
And they looked so clean! My riding suit was covered in mud and sand, my bike the same, my panniers almost invisible through the dust and sand and mud…. They came from a different part of the country…. South. We told them it took us most of the day to do 70 miles…. They said they were doing 250 km a day. My jaw dropped to the floor! And they were not going to stop in town but continue. Not tired  at all! They were going the same way than us from here, East to Tariat and then Tsetselerg.
I thought the guy must be some sort of semi God of the off road, we did look rather amateurs and useless with our slow progress! And they were so clean! Not a speckle of mud in their trousers! Anyway, they left and we went back to the hotel after buying some water.
We did not sleep well. The hotel was busy with locals, each room filled with full extended family. Very noisy. On top of that the sheet over the mattress was so ridiculously small, they always are here, it did not cover half the mattress… Which was not clean! Stressful!
Wednesday 2d July – 135 miles, near Tariat
Considering that Tosontergel is actually a biggish town ( Mongol style) we really expected this time there must be a road! Well, there will be one day, as there are massive roadworks, but for us it got worse!
We left after a solid breakfast of fried eggs and rice (!). The road leaving town was like riding in the Sahara, sand dunes and all! Where is all that sand coming from? It was horrendous and  it took us an hour to do only 9 miles. My bike got stuck trying to ride up a steep sand dune. A truck was already stuck in the sand  no far. My back wheel digging a hole half way up. Alistair had to come to the rescue and get the bike out of the hole and up the end of the bloody dune! 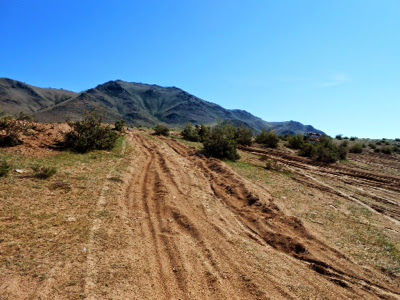 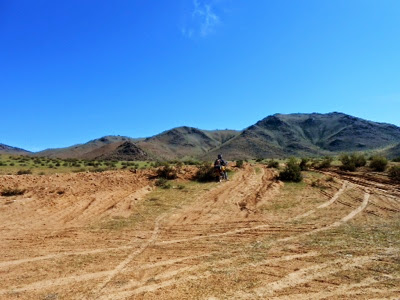 Few hours later the tracks came across a deep large river. We saw a 4X4 going through, it was waist deep, it would submerge most of the bike… Not passable for us. We stopped another 4 wheel drive car, they pointed further down a trail. We followed them. A mile later, the car went through the river. We had to get through, but this passage was almost as  deep!
Then, big luck, another 4X4 came behind us, saw us stuck and passed the river, doing a big swerve to the right! It was shallower on the far right side. We “thumbed up” the car as a thank and Alistair went first. It was deep but doable. I followed, without style and wobbly but I did it and was really pleased with myself. I wondered how our polish friends managed  with their huge heavy bike? Maybe semi God just levitated? 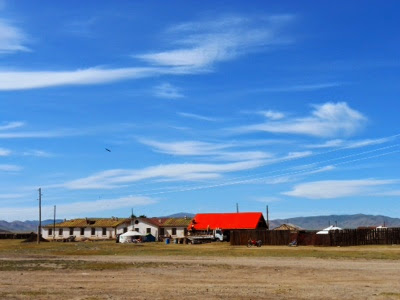 Later, again, another bloody river. How can this be a “major road”? Again we  saw a  car passing, it was deep enough but no more than before. We got through again.
We came across yaks. They look so funny! 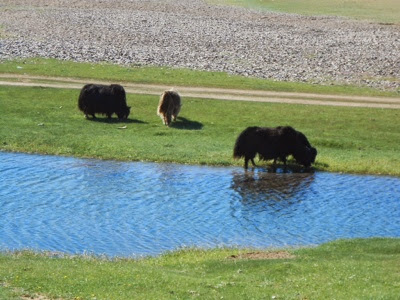 We pressed on through the day. We wanted to get to Tariat and check out if the hotel there had a shower. If not, few miles further north, inside the national Park, there was a Gers camp with hot showers and flushing toilets! According to our guidebook! By then we deserved that! Worse case scenario we would camp by the lake and  bath there!
Near 7pm we eventually got to Tariat. We checked out the local hotel, which was the same dreadfulplace  than the others! We decided to ride to the national park, few  miles further away.
On the way we saw the big BMW of our polish friends. They did not go far today… Less mileage  than us… They found the road very tough and went very slow…. So… No semi God of the Off Road then! They just rode much easier trails before meeting us, coming from the south! I felt much better about my riding skills after that…. And they even looked a bit less sparkly clean in their riding suits!
Then we came across a board pointing toward Khorgo Gers camp. I checked the Lonely Planet. It was the one mentioned as having flush toilets and  hot showers. To get there, we had to cross another river, that was fairly deep and I got water inside my boot riding through. Never mind… Showers, real toilets…. I would have gone through an ocean! 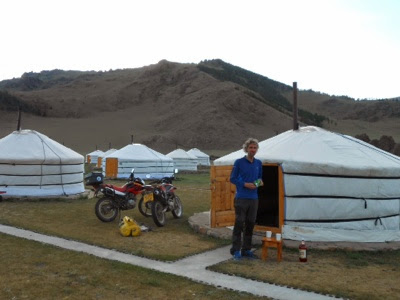 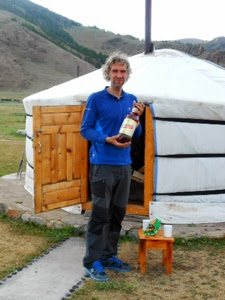 So we went there, they confirmed what the guidebook said. We took a  ger! We got the ger’s wood stove going and using it to cook our dinner of…. Noodles again.. But with added onion and pepper! 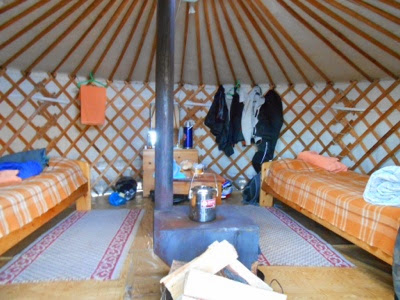 We were told there would be hot water at 9 pm. I went into the shower. Cold water. Then a tiny big less cold water… I was not happy… The lady in charge of the shower block was around…, I complained… Where is the bloody hot water? Now, you must know that this place is rather high up and it was quite cold, the water was icy. The woman just opened the curtain of my shower to check the water! The fact I was stark naked there, trying to wash my hair, did not mater apparently! Anyhow, we had a coldish shower… But at least the toilets were real toilets… With a flush! And clean! And with toilet paper! Civilisation at last! Of sort anyway! 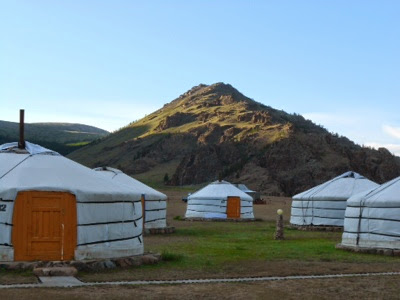