We packed up early and were getting ready to leave. View from our window: 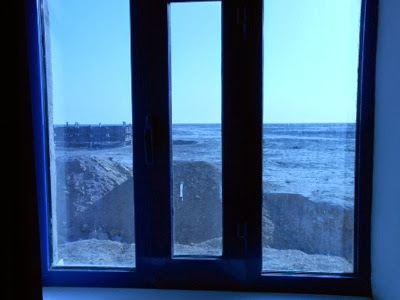 Our moldovian friends left. As we were waiting to pay, we got talking with 2 americans. We were surprised to find foreigners there, in the middle of the desert, unless they just crossed the border! They were actually from the embassy, checking on some local project they were funding.
They told us fuel was hard to find un Uzbekistan. So we asked the owner of the tchaihana if we could buy some from him. He said the fuel he had was very bad quality so he refused, saying we  could buy some in Qonghirat, the major settlement , about 100 miles away.
As we had some fuel on our fuel bladder, we continued.
About 45 miles before Qonghirat we passed some industrial site. We spotted a Tchaihana, it was advertised from the road with a big sign, with icons for food, drinks, showers, and most important, fuel.
We went inside, got some drinks and asked about fuel. We could not see any fuel pump around! The girl working there told us we could buy some in Qonghirat. We were already on reserve…. We would not make it there. We made it clear. After a while, we were asked howmuch we   needed,w e said 20 litres.
We wait a bit more. Thene a lad made us sign to follow him. We got the bikes near the gate of a secured enclosure. Then the lad went off…and came back with 4 water bottles of 5 litres each, full of fuel! Success! We had enough to make it even to Nukus, a proper town!
We got there early afternoon, and started looking for a fuel station. All were closed! Only those selling propane and methane had gas! We spent a   good two hours going around. We spotted a fuel pump with massive queue of cars. After enquiring, it was for diesel. People were even sleeping  in their car! We asked for “benzine” but no luck…. We got surrounded by the curious guys…. Then some discussions between them… And we were asked how much we wanted. We chanced 10 litres,and  within moments, two bottles of the now usual water bottles, full of petrol, appeared! 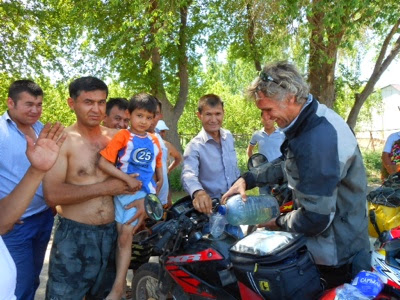 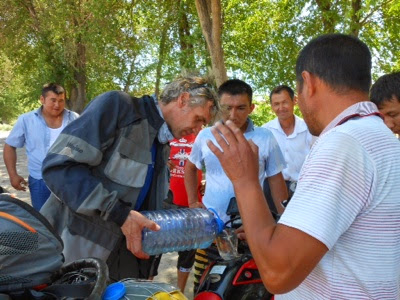 Locals so far have been very friendly. See how they all want to be in the picture!
After that we   stopped for a quick lunch. Then it was 3pm. We wanted to make it to Khiva that day. It was still about 120 miles away, but doable.So we   hit the road in the desert, once again!
Few miles from Nukus, we passed a police checkpoint. They ignored us. Then got up to speed, overtaking few trucks on the way… Then Alistair’s bike disapeared in my mirrors…. I stopped, spotted him on the side of the road, did a u-turn….
Nasty puncture, his wheel went flat suddenly and   very fast! Lucky he did not crash.
It was only once we removed the wheel that we found out what had happened. It was the only wheel we did not replace the inner tube for  new heavy dutty one, because the previous bike owner had done it. Except that the inner tube was some cheap chinese crap! The seam hads plit. Quite a big cut.
Meanwhile a car with 2 local men had  stopped and taken charge of the operation. The tube was remove, patched and wheel put back in place!  Then they left in a rush! People so far on our trip have been very friendly and helpful, as  you can see! Once we got the wheel fully inflated, we could hear the air coming  off slowly. The glue did not set! We had to turn back and try to make it to Nukus.
We rode, stopped, inflated the tyre, carried on and repeated few times. About 500m from the police check point, the patch gave up and we pushed the bike into the police compound. I explained
best i could in russian, what the problem was. We were told to wait and something about a taxi.
We waited for some time. Then the officer made us sign and showeda car. It was not a taxi, it  wasjust some  poor unlucky passer by, ordered to take me to town find an inner tube!
I got on the car and we rode to Nukus, went all around town and finally found a sturdy russian inner tube, possibly the only one in town, as there  are no motornbikes around!  The tube was ok, the diameter (19 inches) was corerct, but 4 inches wide instead of 3! It would  have to do. We then went back to the car. On the way to the police check point, the guy stopped his car and said  something about a friend would take me to the police checkpoint. Then he tried to stop a passing car, which had at least 6 people in it! Then few trucks… Eventually he gave up and got me there. He wanted 20,000 Soms, but we only had 15,000 left… I gave an additional 100 rouble note!
Meanwhile, while Alistair waited for me, he was trying to get the bike onto some stones ( we don’t have centre stand) in order to remove the wheel again. Then who pass by the police chekpoint, with one dropping his bike? Our moldovian friends. Alistair went to check if they had a spare inner tube in their support vehicle. They had none, as their bikes are all tubeless! However they all stopped and took charge of the operation, lifting the bike, securing it over some stones and removing the wheel, putting a new patch, and saying the patch had to remain under the bike’s weight for a good 30 minutes for the glue to set. They just left as i arrived!
The glue did not set, we  had to use the russian tube. The valve was too thick to get through the hole of the wheel,so we   cut some of the rubber witha knife. That botched job seemed to work and we eventually got the bike together and ready to go. By then it was 8pm and we had been under the sun for 5 hours. From the car, earlier, i had spotted a motel, with lots of mobile homes inside. It was just few   miles away. We rode there. From the gate the place looked deserted….. But i was sure i saw mobile homes… There must be some tourists around….we rode round and found a back gate. Fromthere we   could see about 10 mobile homes with deutsch and german plates, and people sitting outside their truck having dinner!
We got in, got a room. The place was bizarre, one of those soviet places for important officials, onceupon a   time, no doubt, very grand but now fairly shabby!
We had a  quick chat with the deutsch … They had spent 8 hours at the border, with a guide! They were on their way to China!
Friday 16th May – 121 miles
We left before 8am making the most of the cool temperature.
Aftera  while, while passing a closed fuel pump we stop to ask if someone could sell us some fuel. Ta guy told me to go to the house with a tractor. We went there, i found someone, but he had no fuel. He told to go to another house, but i could not understand his instructions. He got on his car and took us there, calling someone on the phone. We managed to get some fuel there! One guy call his daughter who spoke some english and she asked lots of questions! It seem people are quite curious about us!
We then, by lunch time, got to Khiva! At last. 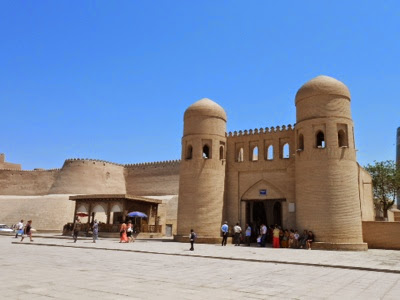 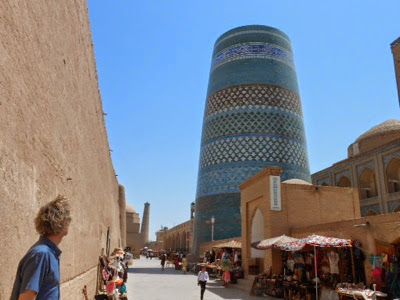 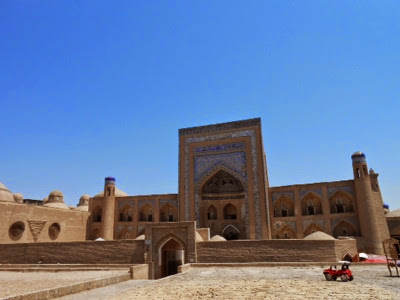 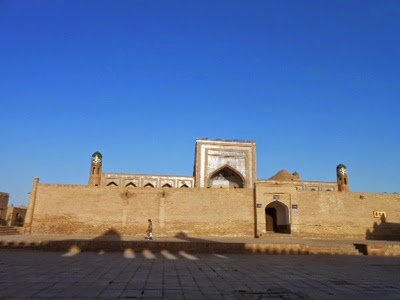 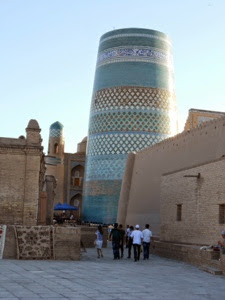 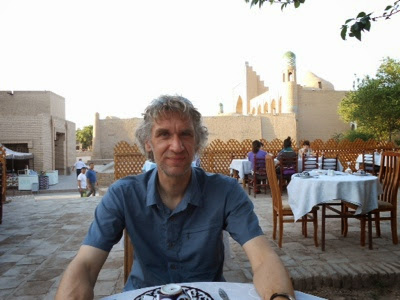 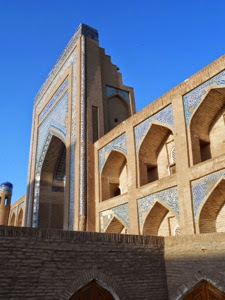 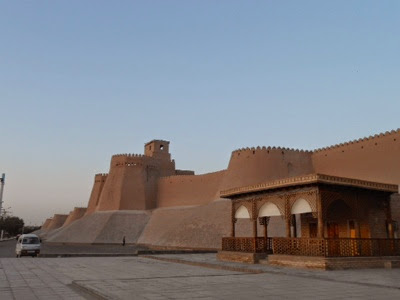