Skip to content
Weds. 30th April – 147 miles ( Turkey, Afyon)
What a day! It started gorgeous enough with the most impressive breakfast buffet! There was an incredible amount of stuff to chose from, lots of it not sure what it was so we sampled few things. 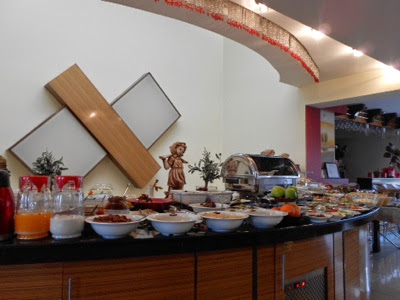 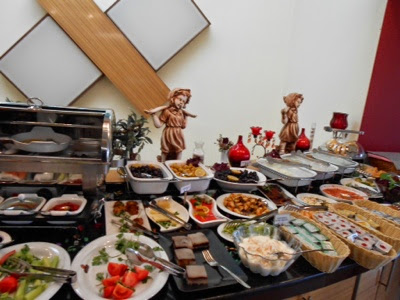 As the weather was cloudy we put our waterproofs on and loaded the bikes, it was time to move on.
That’s when Alistair checked my bike and tried to start it. Nothing happended. We tried again, several times, same thing. The light will be on but the bike would not start at all! Not  good.
We started removing the bags to examine the bike again, nothing obvious. It could be the battery ( it was new), the voltage regulator, the starter motor ( new as well)…..
One lad, Kenan, and the receptionist, came out to check on us. After many gestures and using google translate, kenan and Alistair tried to bump start the bike by pushing it on a side quite street. They got it started  but did not solve the problem!
Kenan , whose honda CG125 was parked next to ours, phone a mechanic who arrived quickly. After some time looking at the bike, Alistair and Kenan bump started the bike once again, and Kenan guided Alistair to a workshop, while i waited at reception with the luggage.
About 2 hours laters they were back. Success! This is what happened. The starter motor was completely seized and as a result the Relay ( solenoid) was also broken. The shop next door had a starter motor that fitted the bike! Then the mechanic phoned someone, and 5 minutes later, someone brought a relay, that also fitted my bike! Quite remarkable, or all those little 125 have standard type of parts that can be swapped between models?
Cost fo all this? Parts and labour 90 TL ( about 42 dollars)…. In the UK a Honda starter motor costs at least 130 pounds!
After many thanks and exchange of details,we left, soon after midday. The people there had beenvery helpful   and friendly.
The destination for the day was 250 miles away, still doable….except that, as we kept going the weather turned to storm and it got progressively colder and colder, and the rain and wind was relentless…. We stopped after a while to get some fuel and i added a jumper.
An hour later we stopped again as it was too cold. We were given some tea ( tea and coffee seems to be usually on offer for free at fuel stations!) by a lad in the restaurant near the fuel station. I got my feather jacket on and my under gloves.
As we climbed to 1000m altitude we got even colder and stopped again. Around 3:30 pm we pulled at the usual restaurant sitting next to fuel stations. The staff there told us to come behind the counter near a giant barbecue to warm up our hands. We were totally shivering and could not get warm.
They gave us some tea, and as the kitchen was open, we decided to have a kebab to warm up a bit. 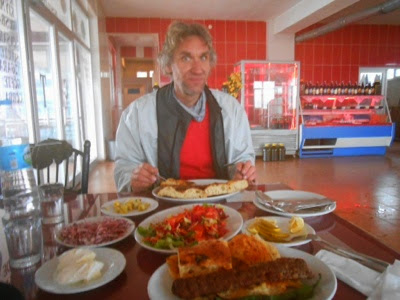 The kebab came with plenty of side dishes and salads and pickled chillis… They seem to love chillis here!
We got the maps out. It was clear we would be able to go very far in that sort of weather. Our gear was wet, the gloves were drenched inside as the water seeped inside from the jacket, and my plastic rain over trousers were leaking…. After drinking more tea brought by the staff, we decided to get to the nearest town, Afyon, which seemed to have plenty of hotels, acccording the the GPS.
So went back under the storm and made the 30 ish miles to Afyon.
We stopped at the first hotel we saw from the side of the road,  and got a room. It was a business hotel / thermal spa. We got all the wet gear hanging from my camping washing line and the placed looked like a gypsy camp with stuff all over the place. One of the panniers was also leaking water and some stuff got wet despite the dry bags! Gear was drying everywhere. Not a good day in total! I expected that at least in Turkey we would have some sunshine, instead this has been the coldest and wettest day so far!
What happened to Spring?