Skip to content
Outside town we refuelled and reassessed the situation. No place to stay for a long time. What to do?
Camping was pretty much out of the question. Every time we stopped we were surrounded by millions of mosquitoes, massive flies, wasps and millions of midges that flew into our eyes, nostrils, mouth etc… Difficult to breath sometimes!
We had to leave the area as we did not know how big the “special permit zone” was.
After an hour ride, through bad roads and gravel or dirt, we stopped at a cafe. We were very dehydrated, it was incredibly hot. We had a drink and a snack, and asked the cafe owner if she knew of a hotel around. She did not. However, a couple overheard us and told us where we would be able to find one, about 100kms away. We rode and rode but never found it. 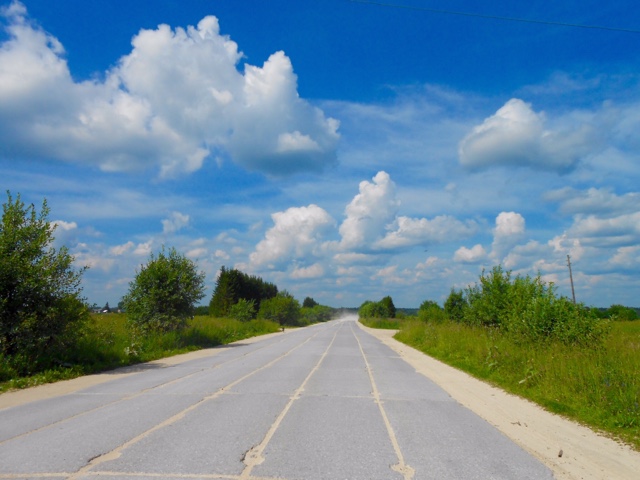 We finally reached the intersection with the M8 and spotted a fuel station. We stopped for fuel and make a decision.
The M8 could take us north to Akhangelsk, ( among detour north, nothing to see there but plenty of hotels, then come back the following day) or ride south and hope that the highway would have few truckers’ places. It was getting late. We were tired, covered in dust, sand, dead flies…. We asked the cashier about a hotel, she gave us the card of a guest house, about 40kms away! Our lucky moment!
We rode to Emetsk. Even with the GPS it was not obvious but after asking, we found it. A big house, no sign.
I knocked on the door and two guys came to answer. I asked about a room. They were only guests, to speak with the owner we had to phone. I cannot speak Russian much, even less over the phone!
Luckily, Constantine helped us by getting, after a long while of trying, in touch with the owner. There were lots of talking over the phone.  Constantine said she was reluctant because the house would not be clean enough for us! She obviously did not see the state of us!
Eventually, the guys invited us in the entrance/ kitchen and we had water and tea with them, while we waited for the owner to come. They offered food and snacks but we were not hungry and too polite to eat their food! They were very welcoming, and luckily, one of them, Elia, spoke good English!
There was suggestion that we could stay in another place, although the huge guest house was empty, apart from Elia and Comstantine.
The guys, and their driver, were living in the guesthouse for few weeks. They are surveyors for the electric companies and survey electric pylons.
Eventually the owner came and we were able to stay. We had a big clean room with 4 beds and private bathroom all for us.
Unfortunately the water was out, we had to wait for a shower. Instead, with Elia we went to the local shop which was closing. It was 9pm and Sunday! He managed to convince the owner to reopen just for us. After buying some snacks and water and a couple of beers, we went back to the house. We had not had any lunch or dinner that day, but to be fair, I was just dehydrated and extremely hot. I just wanted  a shower.
Back to the house we had a drink with the guys. Their driver was busy watching football in his room, but Constantine fetched his computer and we saw few videos of their job! Obviously they love it. One was Elia with his skis trying to reach a pylon,  with his instruments, clipping off one skis and plugging into very snow down to his neck. Getting out of this was hilarious to watch. Another was him using a beavers’ bridge to pass a river… The pylons are in the most remote and difficult areas to reach so make for interesting viewing! 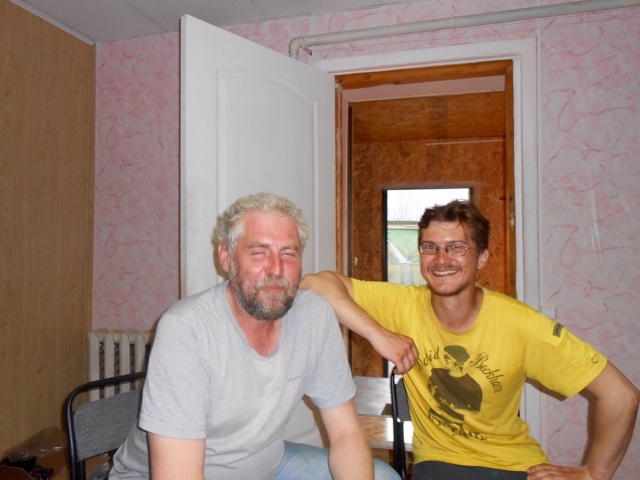 Comstantine on the left, Elia on the right. Two top guys who were very welcoming and super friendly! What a pleasure to meet such kind and friendly guys, especially after such a day!
Finally there was water and I went first to have a shower. Just as I came out of the shower, the owner came back. She was swimming in a lake with friends and wanted to invite us for a swim! A bit late for that, although we were so far north that it did not get dark at night. We woke up hearing the guys talking, we thought they were getting ready for work, as it was fairly light outside, but it was only 1am!
When we got up the next morning, the guys were gone to work.
Day 23 – Velikiy Ustyug – Monday  4th of July – 480kms
The day started ok. We had nice weather, good road, we found a cafe, about 90 kms down the highway and had a smal breakfast with fried eggs and bread.
We then took the turn off toward Kotlas, the last town in the Oblast of Arkhangelst. It started fine, but after a bout 20 or 30km, it turned into a gravel/ sandy road. I can tell you that this is the WORSE gravel road since Bolivia! And I rode across Mongolia!
It was incredibly loose gravel mixed with  insane corrugation and deep sand. Keeping the bike up was a struggle , my front wheel was all over the place and I was very concerned that I could not make it all the way!
After about 10kms I lost control of the bike in a sandy section And broke the brake lever. I had enough length on the lever  to continue. Alistair helped me to pick up the bike ( well, he did it while I watched!) and we discussed whether to continue or turn back. It was very hard going… And scary! A bad fall and it is easy to break a bone. Also, there was a lot of traffic on that road, buses, trucks, many cars, barely slowing down and not giving us much space… Once wobble at the wrong time and  we would be toast!
We pressed on. After a while we came across a fuel station. By then we had covered a good 30km of gravel. We asked the guy how much we had of gravel or if it was all like this. We would have some Tarmac he said. That kept us going.
After about 30km we had a bit of Tarmac , briefly. By then I had found my balance on the bike. Sand has always been my nemesis, mainly because there is nowhere to train in sand in the UK. Also, I was not familiar with the Heidenau tyres, my previous tyres were more off-road orientated and gave me better grip on deep mud. These are more dual sport. Tyres are always a compromise in such trip!
I manage good speed and somehow, through all the 300kms that this road was until Kotlas, with about half of it horrendous gravel, we managed without further problem, despite few hairy moment; but the road took its toll on the bikes.
The TTR’s Acerbis fuel tank was loose. It is fixed to the frame on two brackets and two screws. Obviously, not strong enough for such bad corrugation. One screw disappeared, another one sheared.
Some bulbs need to be replaced and I hope this is all. So some fixes to do.
Once we reached Kotlas, we took the southern road to Velikiy Ustuyg. It had many hotels and seemed rather pretty, unlike Kotlas, It was only another 50kms and the road was good! At last! 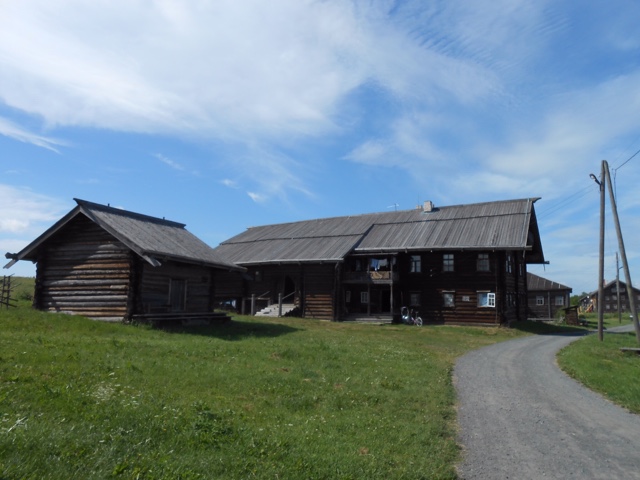 We found a hotel in town. We must have been quite a sight, panniers covered in white dust from the sand, us covered in a mix of sand and dead insects! At some point we need to clean our riding suits maybe!
This had been our hardest day in this trip so far! Any worse road, I won’t be able to make it! It tested my balance to the limit!  I found that sand behaves like mud, so I rode accordingly ( this is my only reference point after all, after the winder riding the muddy trails of Surrey!), but worse than that would be pushing! These muddy days in the green lanes had been productive to get me familiar with the bike and finding, somehow, my balance! I will never be a good enduro rider, as I will never be a good horse rider, but I muddle through, and I guess this is good enough.
I still managed to keep up to speed and we arrived in town before 6pm despite the long distance! I was quiet please with myself! 🙂
Health wise, I had been plagued by diarrhoea on and off since St Petersburg. Every two or three days it comes back. Not the best time on that road but we found a pit toilet in a fuel station. I may have to get some antibiotics if it does not get better! Luckily, in Russia, there is no need for prescription to get antibiotics, so I will get some ciprofloxacine at a pharmacy today.
I leave you with the best building you will ever see for KFC: ( in Petrozavodsk!) 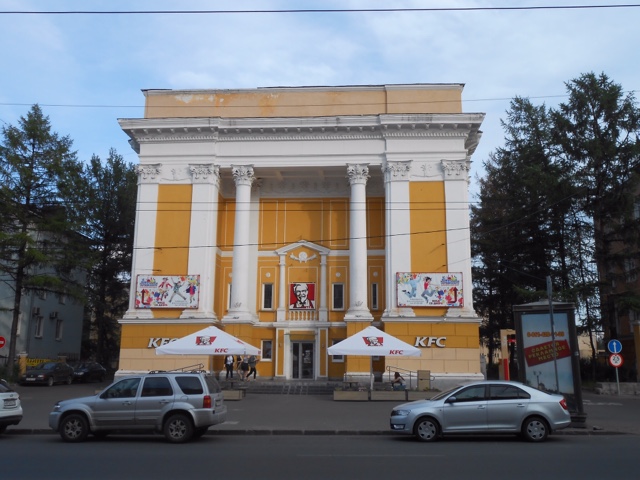