Skip to content
On our last day in St Pete, the weather was not so nice.
In the afternoon we took a stroll to the local botanic gardens. Sadly we could not visit the huge green houses, not sure why! Everything was in Russian. The green houses were locked. A group of students got in but we could not follow! It is surprising, in a town as touristic as St Petersburg, that not much is done to put information in English, or any other language than Russian. 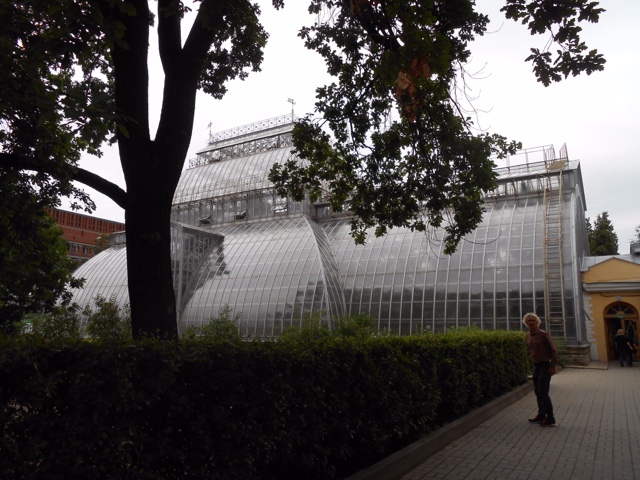 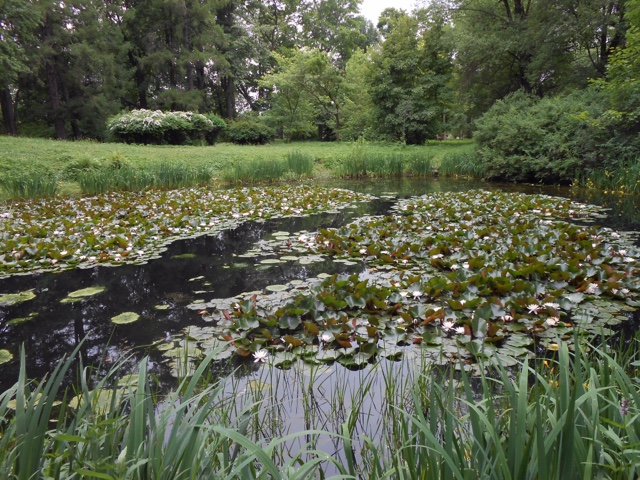 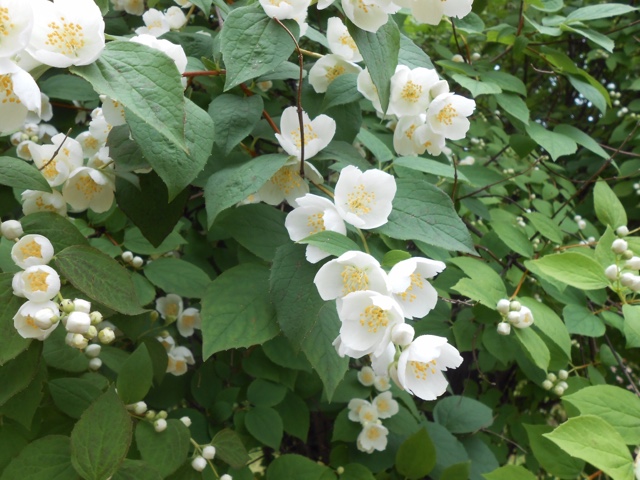 In the evening, Sergio, a Russian biker, met us in our hotel. He took us to the local ‘Stalovaia’ (столовая ). We did not know about those little places. They serve cheap traditional food. Russians tend to go there, as restaurants are more formal and much more expensive. In small villages, there may be a Stalovaia but no restaurants. So now we will know what to look for, or to ask, on the road.
After dinner we stopped at a mobile phone shop. We had tried to buy a PAYG SIM card but failed miserably. So Sergio was in hand to explain to the shop assistant what we needed. Unfortunately, Alistair’s phone was locked. He thought it was not. So no SIM card. In case of emergency we will use the UK SIM card despite cost. We are not too bothered by Internet access or not. If we find Wifi, fine, if not, no big deal.
Sergio got us laughing out loud with his stories of bears and clueless tourists. But now I am worried about bears and wolves in the wilderness of Russia!
He also took Alistair to a shop to buy motorcycle oil. Thanks Sergio! 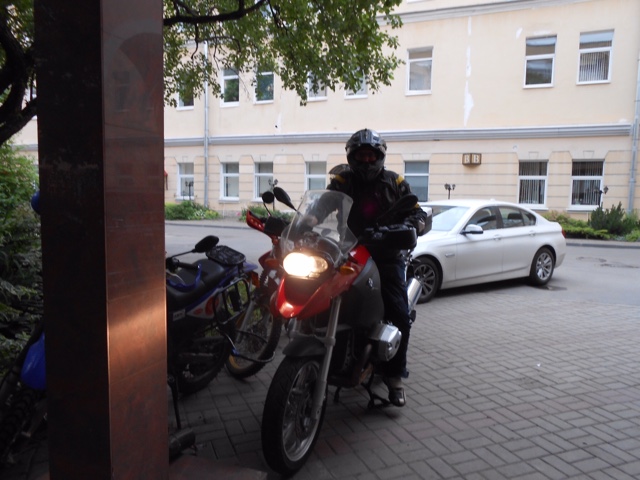 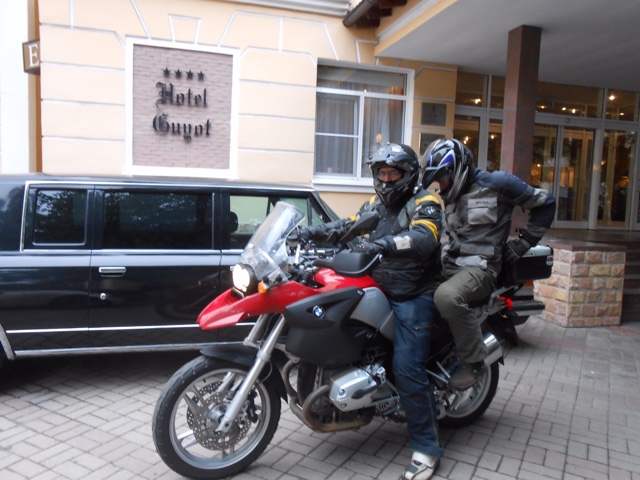 Day 17 – Tuesday 28th June – Sortavala – 280 kms
As we started packing our bikes that morning, it started to rain a lot. We set off under fairly heavy rain and had a very miserable day on the road.
The Russian Federation consists of republics, krais, oblasts, cities of federal importance, autonomous oblast, and autonomous okrugs, all of which are equal subjects of the Russian Federation.
So we left the Oblast of Leningrad, where St Pete is the capital city, and entered the Republic of Karelia.
Each “region” seems to be responsible for its roads, this is very clear when you change Oblast or Krai. The Oblast of Leningrad seems to have not bothered with the last few miles before Karelia, as we ran out of Tarmac and the road turned to gravel and mud. Under the very heavy rain it was no fun but we hardly slowed down. Our bikes are built for that sort of terrain and we wanted to get to Sortavala. Once in Karelia, Tarmac reappeared, although of less good quality.
After the never ending straight flat roads through dense forests, Karelia was beautiful. We rode along the Lake Ladoga, through gentle hills, small farm holdings , beautiful meadows and woods. It would have been superb if it has not been absolutely pouring down with rain!
We finally found our guesthouse, frozen to the bones. It was not easy to find the place, even with the GPS coordinates.
The owner of the guest house saw our Uzbekistan’s visas from two years ago . He had lived there in the past. He did not speak English so not able to get the details. He was very friendly  and helpful. We got the bikes in his fenced courtyard, after removing the very savage dog that lives there. He even offered to drive us in his car to the supermarket to buy some food, as we could not get access to our bikes ( savage dog was set loose).
The guesthouse had a communal kitchen, very convenient. We got some Plov from the supermarket and heated in the microwave.
The place was immaculate and warm.
Day 18 – Weds 29th June – Petrozavodsk – 260 kms.
We left Sortavala mid morning. The day was, once again, wet! By then I was seriously fed up. Since we left home we had one day only rain free. I was considering altering our itinerary and ride south.
Alistair was worried about the bikes, the oil level on both was very low. We should have changed it in St Pete but difficult in town to find a quite spot. And in Sortavala, due to savage dog in the yard, we couldn’t, in any case the weather was against us.
So we stopped outside town, bought some car oil and topped up both bikes.
That done, we left the outskirts of Sortavala. We did not see any village for a good 150 kms.
Eventually a cafe appeared and we stopped for a cup of tea to warm up, the rain was less violent than the previous day, but a constant drizzle all the time.
We then pressed on and arrived at Petrozavodsk, capital city of the republic of Karelia, on the edge of lake Onega, by mid afternoon. We found a good deal online for a nice hotel with parking for our bikes. So I had booked it in advance.
The town is surprisingly pleasant and well kept ( by Russian standards). We had a walk around and down the pier to book our hydrofoil tickets for the next day. The main attraction is the Island of Kizhi, about 1h30 minutes from town, by hydrofoil.
In the evening, Alistair managed to change the oil on our bikes. He also found that his carburettor is leaking more and more fuel. Taking it apart is risky without a replacement gasket at least.
He spoke with Brian, the TTR250 guru, in England, via email and decided against opening the carb. Getting the parts first is essential.
So I emailed our friend Anton, in Tomsk. 4000 kms away, but we need a ‘local ‘ address to get the parts sent to. Anton replied very quickly with the parts numbers we needed with several reasons for the leak, and saying he would rather order the parts  for us himself, as they are available in Russia.
We will be able to get the carburretor fixed in Anton’s house as he is a very smart guy and an excellent mechanic. Not his job by the way! He is a programmer for an American company, but he still can take a bike apart and back together without any problem! So Alistair will just have a look at the carb tomorrow, after Kizhi, do some bits of maintenance and checks on the bikes.
We decided to stay an extra day for that. 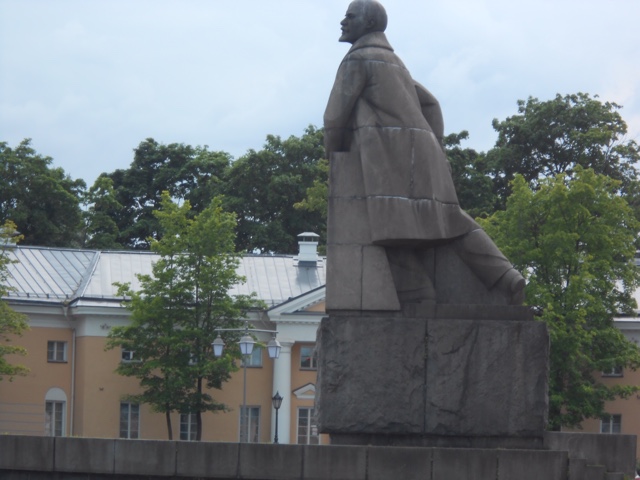 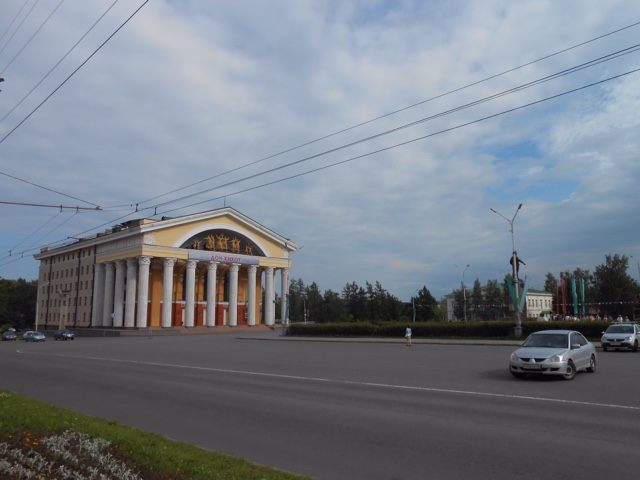 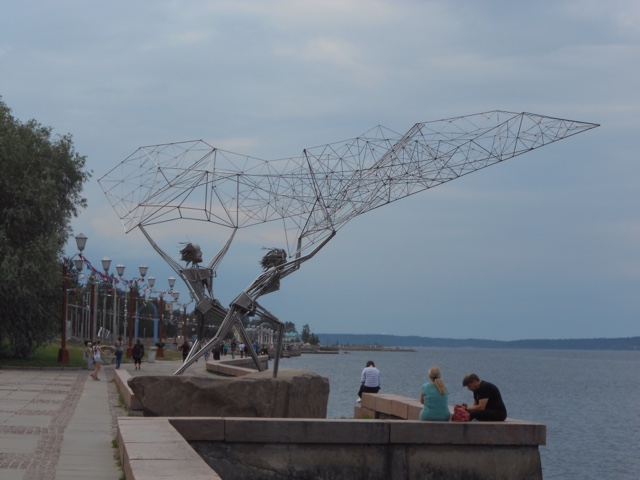 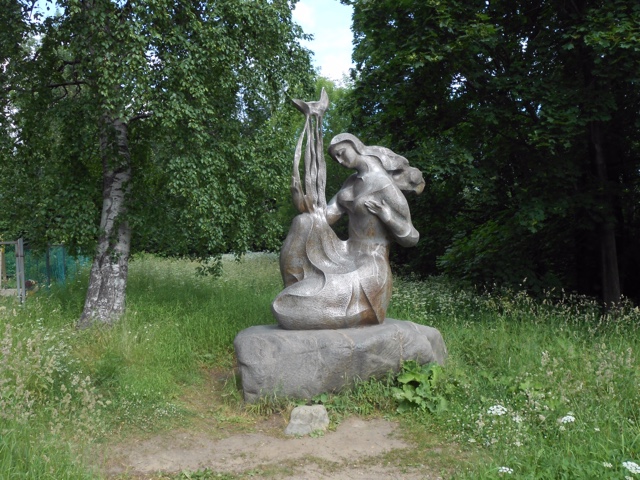 Day 19 – Thursday 30th June – Petrozavodsk – 0 kms
After breakfast we walked to the Pier and found the boat. We were first in the queue, with the exception of a family with two kids.
Then the tour operator arrived and left…people started to get in the queue. I knew what would happen and prepared myself. I was born and grew up in Paris and used the subway there all my life,  and for the last 18 years, I have become an expert at dealing with the London Underground at peak hours! I don’t get beaten at that game!!!
As the gate opened, the guy opening the gate left  the family in, then the tour guide and its 40 or 50 Japanese ( or Chinese) tourists in priority… Well, I had been in that queue for 20 minutes, no way they would pass ahead of me! I plunged, someone grabbed my arm, I ducked pushed in and got in. I heard a guy call женщина ( ‘woman’ in Russian)… I did not care. This is Russia, no one is going to jump the queue ahead of me!
The hydrofoils are horrible and the best ( very few !) seats are at the front. Else you get at the back with all the diesel fumes, as we did when we went to Peterhof. Not nice!
I secured a seat at the front…. Alistair had disappeared at the back of the queue, for some strange reason! All the Chinese arrived but none tried to sit next to me! Maybe they got scared at the scowl   on my face! Alistair eventually joined.
Kizhi has very ancient wooden churches and villages. Tourists cannot stay the night, it is a full day excursion. It was superb and well worth the visit. 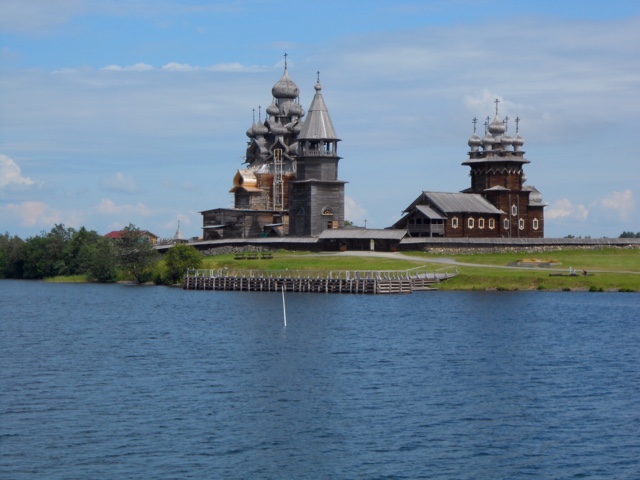 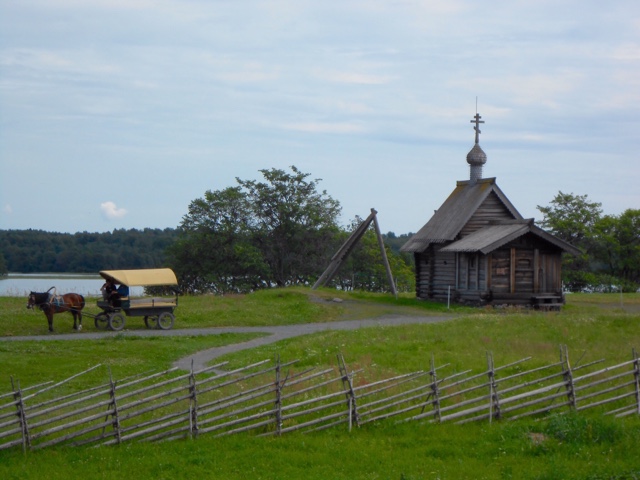 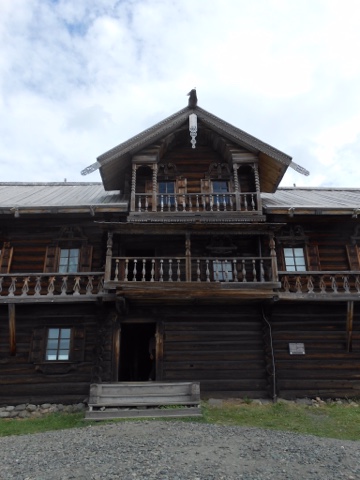 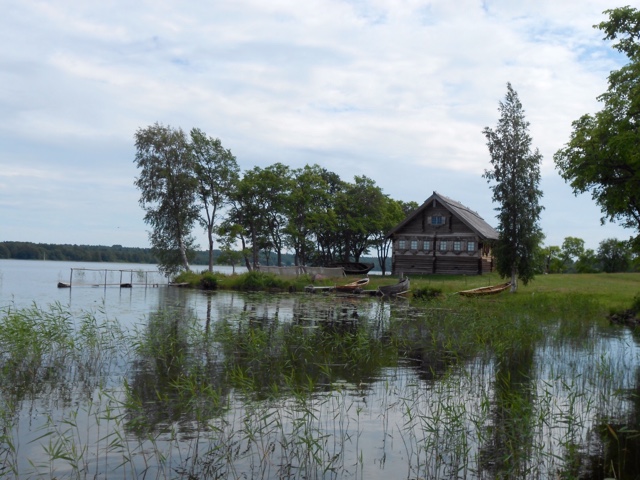 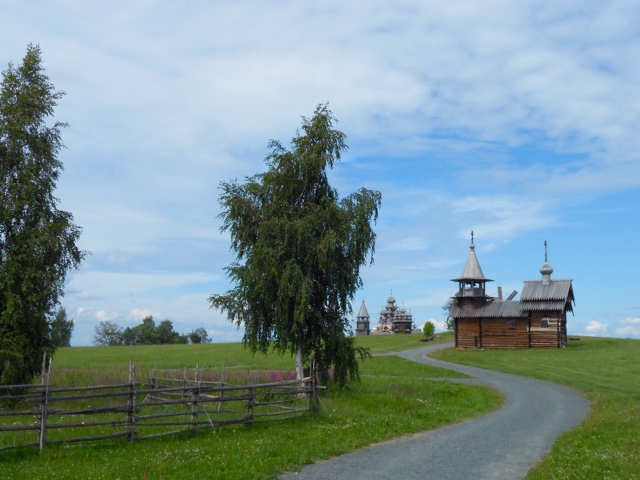 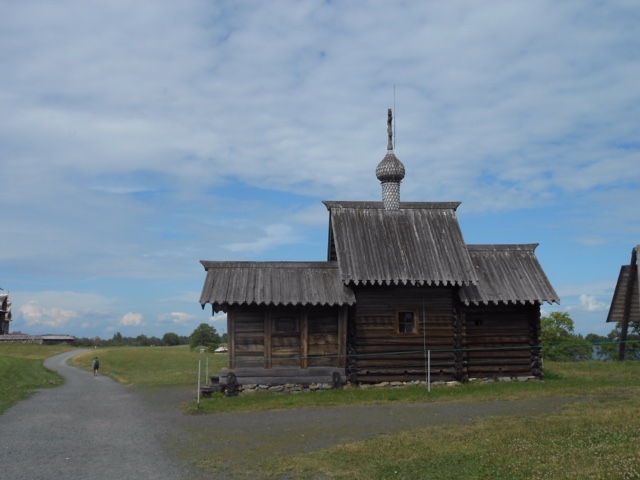 We rented some bicycles to go around. 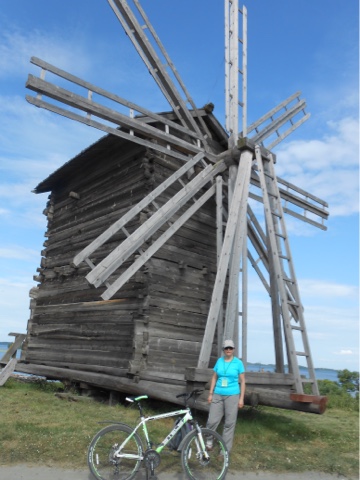 Now, if someone can tell me the difference between a transfiguration church and a bog standard church, I would love to know! 🙂
We then sat for a drink, as the day was incredibly hot. As Alistair bought some peanuts we got ourselves surrounded by crows! My sister in law Pauline would have been horrified! 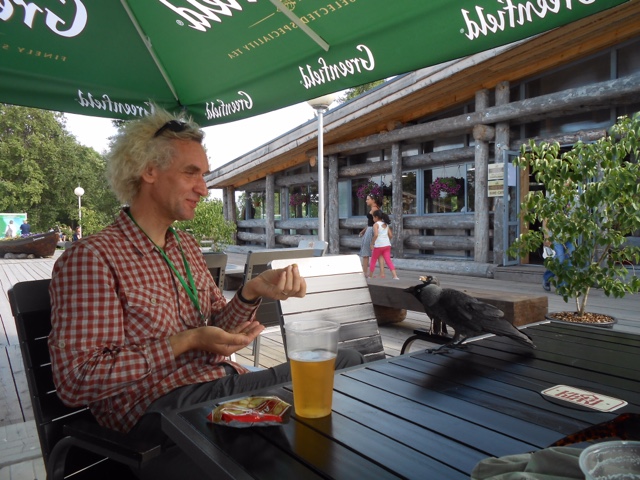 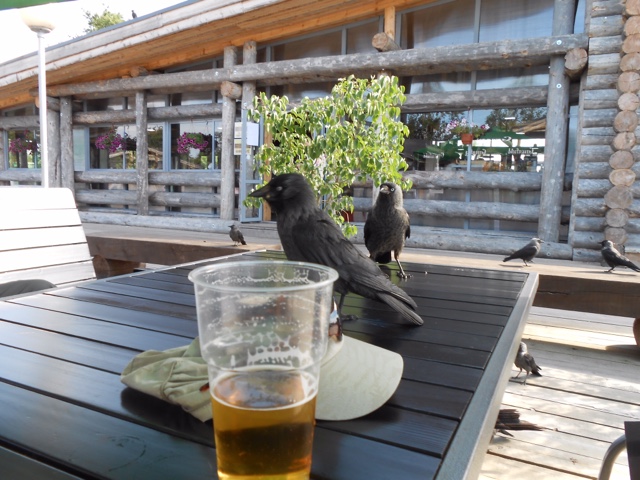