Velikiy is an ancient town that is now enjoying a sort of Renaissance since 1998. This is when the then Mayor of Moscow declared Velikyi Ustyug to be the home of the Russian orthodox Santa Claus: Ded Moroz. It means Grandfather Frost.
He brings presents to children on The 31st of December.
Since then, the post office in Velikyi has received many letters from children. Ded Moroz is often depicted wearing both a blue as well as ared coat and looks very much like Santa. There are images of him everywhere in town.
The town is still run down, with pavements of dust and sand, many churches and monasteries that are pretty much falling in ruins. I thought despite of that, or because of that, they were very beautiful in their faded grandeur. 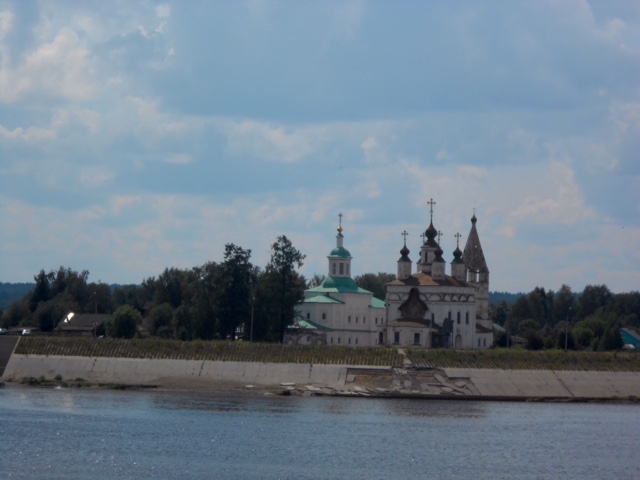 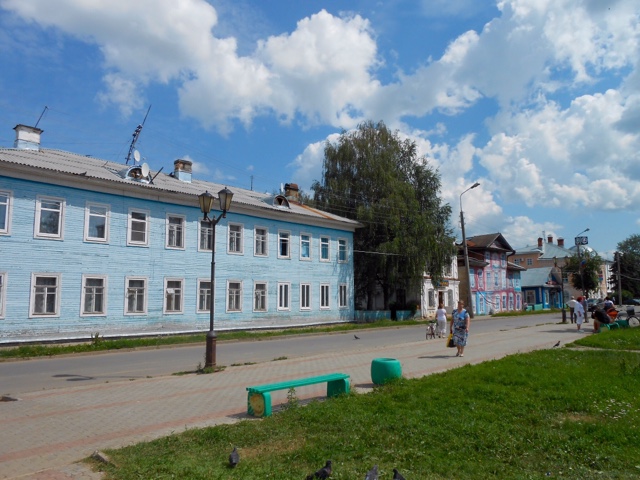 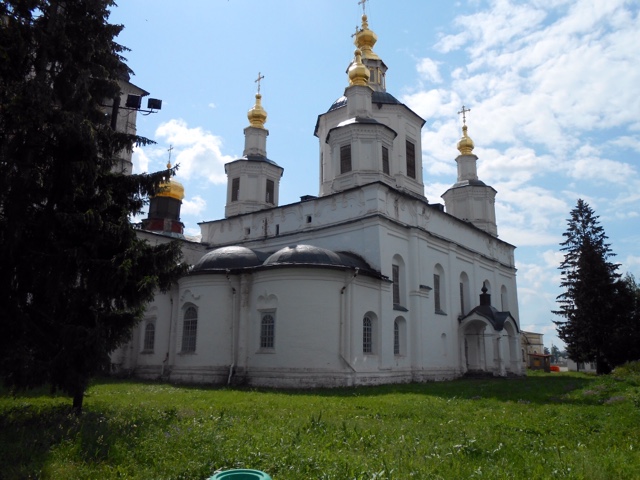 Many churches!
What seems like a massive monastery, but closed: 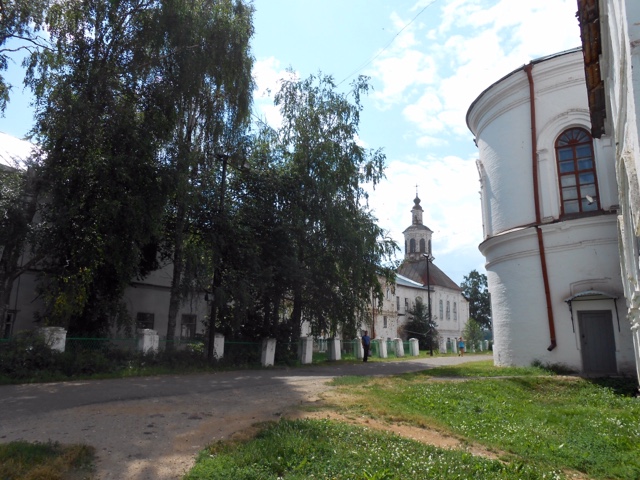 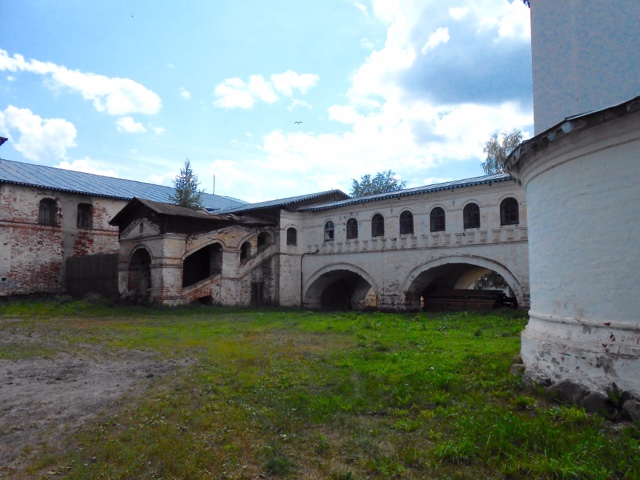 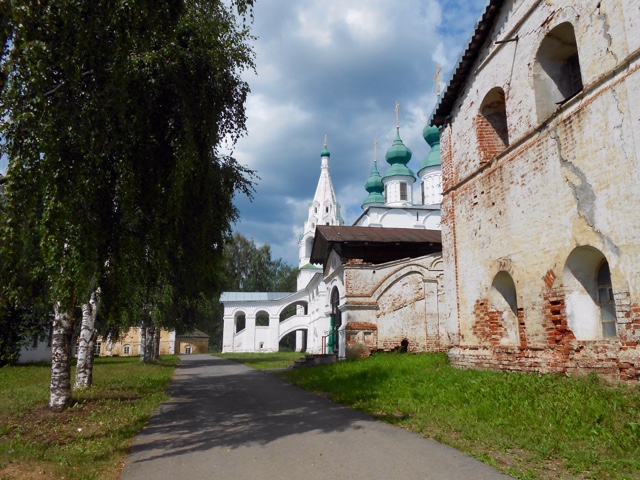 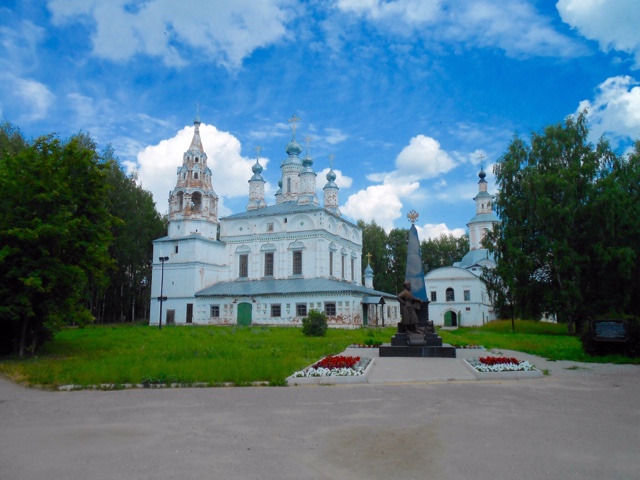 After a long walk into town and lunch and a beer at the town centre main cafe ( it even had an English menu!!!!!!) we walked back to the hotel, a mile away, and spent the end of the day with Alistair working on the bikes and fixing stuff, like his loose fuel tank, and other bits, while I did some research for the next few days ( places fro the night on the way etc…)
Day 25th – Wednesday 6th July – Velikyi Ustyug – 0kms
Alistair woke up very early and very sick. He blames the beer at the cafe at lunch time, it was cloudy instead of clear, and rather flat. I did not drink it,  so I was fine. The only thing we did not both ate or drank.
He was way too ill to ride, so I strolled to the admin desk and paid for another night.
We took some rehydration salts, me for my on-and-off upset stomach, him due to his bad day.
Nothing much was done that day as it was a rainy cold day and Alistair was too ill to walk. 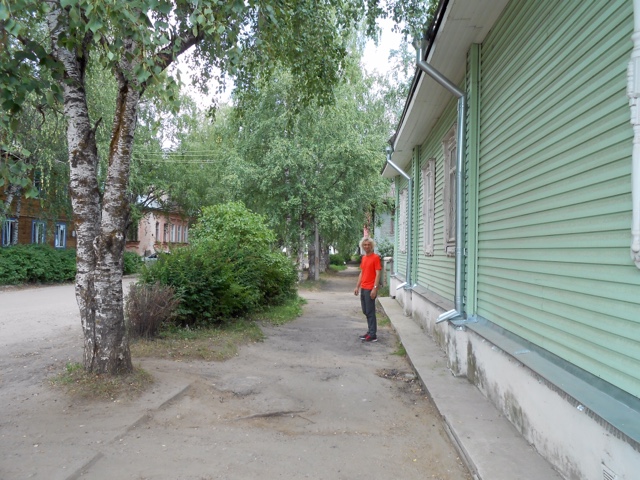 Day 26 – Thursday 7th July – Sharya -320 kms
We left Velikyi mid morning.
The destination was Perm, but it would take three days to get there.
Sergio, our friend from St Pete, had introduced me to a Russian App called Yandex. It calculates itineraries but also shows hotels on the way, fuel stations and much more.  I finally managed to find the English version! It is amazing! Love it although it does not seem to have all the functions he was telling me about. The Safari version is better but still not complete. In any case, using it I found a place to break our journey, in Sharya.
The road was good, the weather wet and rainy, still riding through dense forest. It was a boring ride south all the way, but we got to Sharya and found the hotel by the side of the road. It was simple and cheap. It did the deal.
It even had wifi!
Day 27 – Friday 8th of July – Belaya Kholunitsa – 370kms
Belaya was just another dot in my map. Once again, Yandex showed a couple of places where we could stay, for the night.
The settlement ( can’t call it a town!) had a feel of frontier town, local drunks and junkies hanging around, lots of passage , two small hotels between a petrol station. Just a stop over place.
The hotel was virtually empty, like everywhere we go, but it was a new building with a nice bathroom and it was perfect for the night. Still very cheap. I was concerned about the bikes but we were able to put them in a factory yard, with a very savage looking dog in a large pen. The bikes would be secured!
Although we took the sheepskins off, as I already had a sheepskin shredded to pieces once, by a guard dog, in Argentina…. And as we know from bitter experience, finding a sheepskin is not that easy!
I tried to get online  to book a place in Perm, but the wifi was not working! Usual thing in many places. Do you have wifi? “Yes”.
Does it work? “Yes”.
Actually not, it does not work!
Oh well!
We had a small walk out to the local Stalovaya but it was a small poor display in a sort of self service, like school canteen. I was not hungry as we had had a descent Plov for lunch in a little Cafe.
We bought some bread and cheese spread ( a bit like the “Vache Qui Rit”, but a big square of it).
So much bread was not a good idea for me! 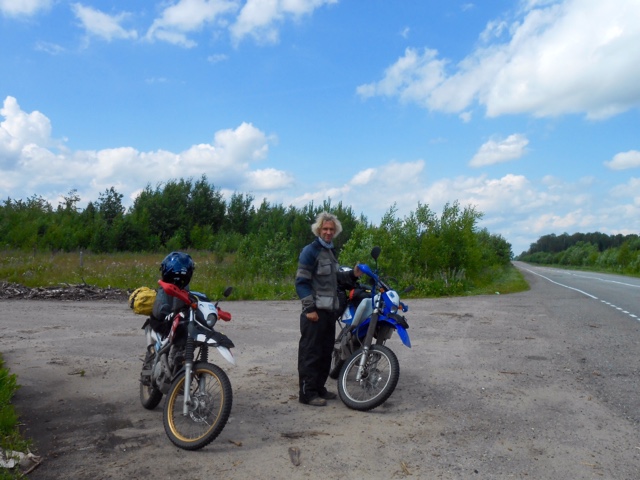 Day 28 – Saturday 9th July – Perm – 430kms
It was a long day ride. Although, surprisingly, the forest cleared out occasionally to reveal (you will never guess this!) farmland! Yes, not huge, but fields and villages of farmers. Well massive buildings, probably of the cooperatives.
The day was windy, but at least the sky cleared up. Eventually we had nice weather with white clouds dotting the sky. Our first day of really nice weather!
We stopped at a cafe to have breakfast (fried eggs) and continued, punctuating our ride with stops at petrol stations, for fuel, tea, water and toilets! At least Yukol petrol stations have real toilets, not the hut at the back with a hole in the ground and a stench that makes you wonder how anyone can come close to it! Give me the bush any time!
Unfortunately, none had any wifi, so we could not book  any hotel online.
At the day progressed I started feeling unwell again. It could not have been dehydration, the weather of the last few days had not been hot, or dry, and I had been taking some rehydration salts, just in case. They did help for few days.
Eventually I had to make an ” emergency stop” and run behind a bush! The problem of being on the road is eating  a lot of crap that does not agree with my stomach anymore. Eating lots of bread with cheese the night before was a big mistake! As I only had the fried eggs from breakfast and no lunch, on the day, I can only blame dinner the day before. I have to cut on bread ( and pastries and all stuff loaded with wheat).
I had the same problem with grapes. I used to eat grapes, then, once, years ago, suddenly, I was very sick after eating some. Trying again few months later, the result was within two hours! A third time confirmed! I had not touched grapes since! One or two is ok, a lot is not. I will test my wheat theory by reducing or cutting my bread/ pastries  intake. My usual diet is mainly protein and vegetables, and if I eat cheese it will be with few small crackers only.
Anyhow, we continued. The day was very windy and it was rather tiring, as none of our bikes has any fairing.
About 70 kms before Perm, we came across a junction into a busier road. It was absolutely packed with slow trucks, impossible to overtake, crazy impatients drivers in 4×4 cars, in a hurry to meet with their ancestors, driving erratically, ( maybe drunk or on drugs? How can anyone drive like that otherwise?) and lots of very bad stretches of Tarmac and gravel, where the trucks crawled at walking pace and the car drivers became even more hysteric, if such thing is possible .
It was slow going and full of near death experiences!
We finally arrived in town. Few days before, I had selected few hotels that had private parking for our bikes, and taken pictures of them in my iPad.
We had programmed the GPS for one of them. We arrived, the place was empty. We had a room, cheaper than in booking.com and with an additional 15% off in addition! Way to go!
The bikes put aside in the guarded carpark, we got changed and showered and went for a dinner.
Since Lithuania we had been on Moscow time ( 2 hours ahead of the U.K.), even at a small stop 150kms before town, it was still Moscow time. Then, in Perm, we lost not one but two hours.
It seems that there is hardly any time zone “Moscow -1 “! And next time zone we will most certainly lose again two hours at once!
Our route so far: 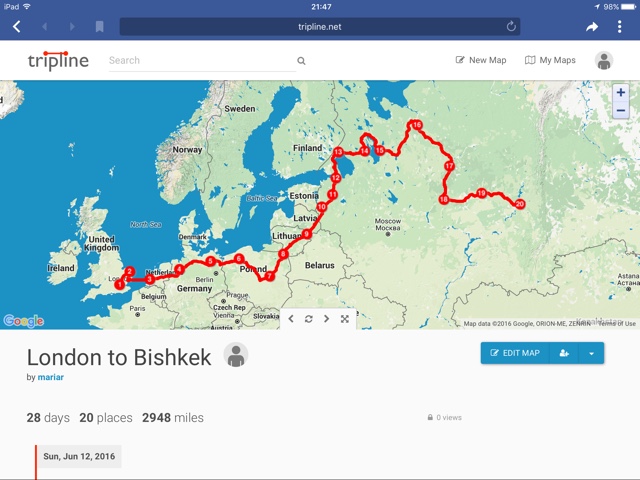