Monday 19th of May – o miles – still in Bukhara

Completed 5,005 miles ( on the bikes only, not including ferries! ) so far!
After breakfast, near 10 am, we asked the matron who ran our hostal for our passports. We needed them to go to a bank. We also asked this formidable looking but nice lady where we could find a bank or change money.
She told us about Capital bank, off the square. We went all around but could not find it! So we went to the Asia Hotel, a large 4 star hotel, which, according to Lonely Planet (LP) was able to give USD cash advances on visa cards. The receptionist pointed us to a little office and we waited for the employees to turn up! When they arrived, they could do nothing for us, as they had no money!
As we crossed the reception hall, the receptionist asked us if it was fine, and we explained that the hotel’s bank had no money! Interesting bank!
The receptionist told us about capital bank, and the security guard pointed across the square, from where we came. So we crossed the square again, and after asking a shop keeper, he took us round the corner of his shop, pointing at a door. The door was covered in stickers in Uzbek, but no sign it was a bank!
As we opened the door, there was a minuscule office with two desks. One was behind a glass window. The tiny place place was full of  locals. We got in and waited. After a while of nothing hapenning, we left.
The LP said we could get cash advances from the national bank of Uzbek. It was in the little map in the book. So Alistair decided to walk there ( it was a bit of a distance).
Over two hours later he came back. He found the bank, and met there with a canadian couple who had ran out of cash and did not even had enough to pay their hotel! Unfortunately, they could not get cash advance from the Uzbek national bank! Apparently some machine was broken!
Alistair told the canadians, who were a bit desparate by then, about capital Bank. So they all went there. By then the place was quite. Unfortunately the bank would not do cash advances on any  sort of card! However, they said there was an ATM machine near a carpet shop.
As you may guess, there are hundreds of carpets shops in town! Anyway, Alistair and the canadians went around asking carpets shops about “bankomat” which stands for ATM, they eventually found a machine giving USD!
Alistair got some USD but the canadians’ cards did not seem to work, until they asked for smaller amounts!
I guess otherwise we would have lent some cash to those poor buggers until they manage to get cash in Samarkand or Tashkent! We could not have left them in such situation… Finding banks giving money, or ATM  is like finding fuel in Uzbekistan… Very hard to find!
We went back to the ATM machine an hour later, to try if I could get some more dollars with my card, but by then the mechine was broken! 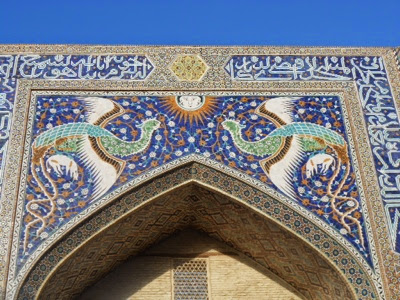 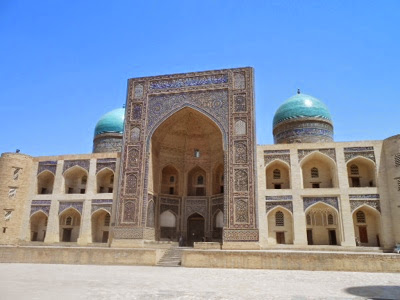 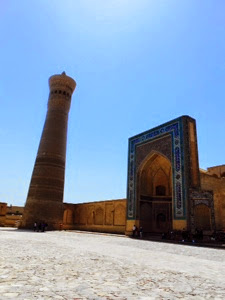 Tuesday 20th of May – 179 miles – Samarkand.
Our map shows that the road from Bukhara to Samarkand is a motorway. Well  might be a motorway, but not as we know it! As a result it took us longer than expected to get there.
Samarkand is a pleasant town, with lots of parks and fountains, and the temperature is cooler as well. What a relief after so much desert! 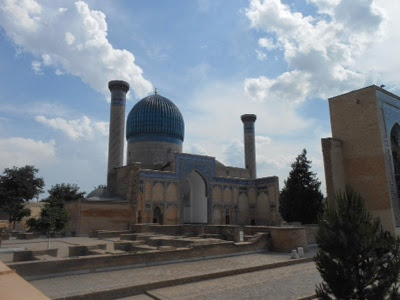 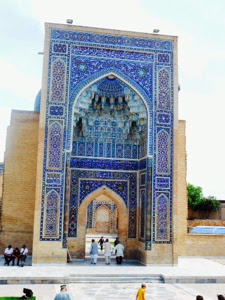 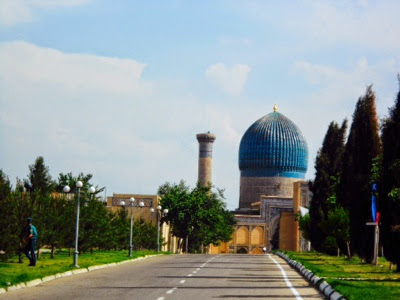 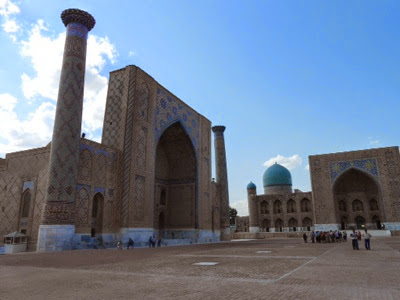 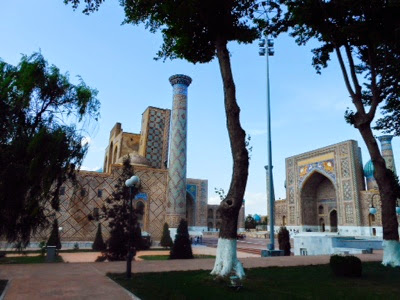 Getting our maps on a table, in the guesthouse’s patio, we looked at how to get into Tajikistan, our next country.
The border i had in mind, near samarkand, is still closed. So the choice was either go north and use the main border crossing, a big detour north… Or ride south across more desert, and get through a minor crossing that seems still be opened, according to the excellent Caravanistan website.
To get there is a long 300 miles, but then Dushanbe, the capital of Tajikistan is only 70 km away!
After discussion, we decided for the southern border, which will be less of a detour.
On the bikes front, Alistair’s bike is still burning a lot of oil, one of the fork seal is leaking a bit and he still has an oversized inner tube in his front wheel! Seems going fine though!
My bike fare very well so far, but the frame supporting the panniers has snapped on one side. We will need to replace those before Mongolia as they are way too flimsy for the job. The signal lights at the back, which where already broken and taped in when we bought the bike, keep falling off as the panniers keep pushing in. We will see if we can find something.
I contacted a good motorcycle mechanic in Bishkek ( Capital of Kyrgystan) who was recommended to me by a fellow traveller. We should be able there to do some maintenance work and get a  new frame built.
Tuesday 21st May – 0 miles – Samarkand.
Visiting tourist attractions….
Health wise we have been a bit sick with some food poisoning for the last few days… Still on going! 🙁
It seems Uzbek food (grilled meat, salads, rice, potatoes….) is not going down too well.

Few pictures of the registan and locals below. 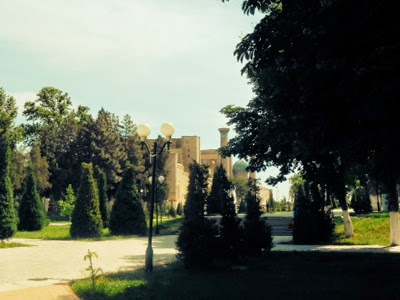 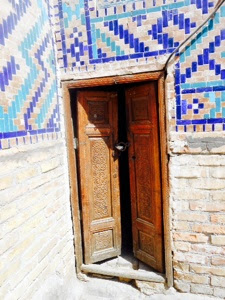 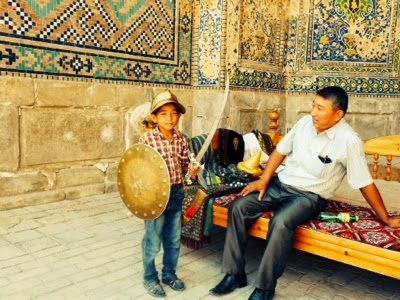 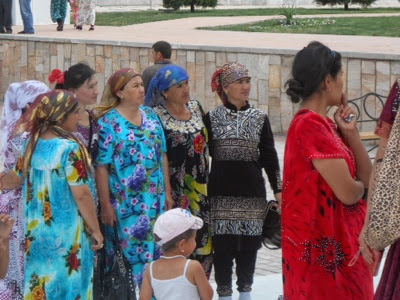 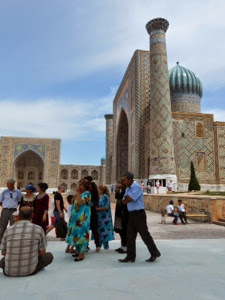 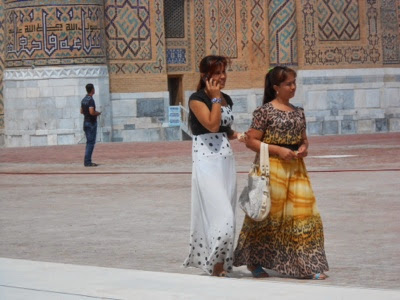 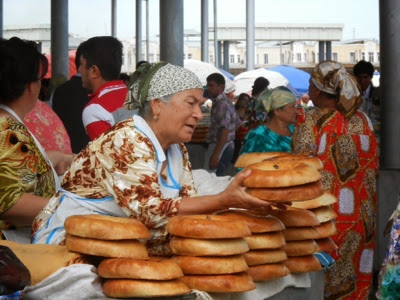