We left the holiday camp with no rush, as we are well ahead of schedule. We continued using the back   roads, riding north west and aiming for the southern border of Estonia. The roads were sometimes in a very bad state, or ended up as a sandy track, but nothing our little bikes could not handle. 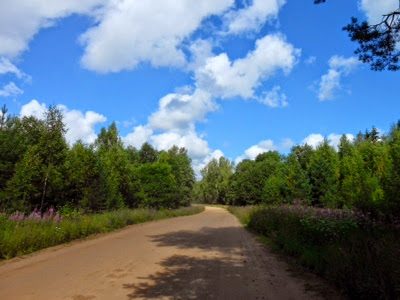 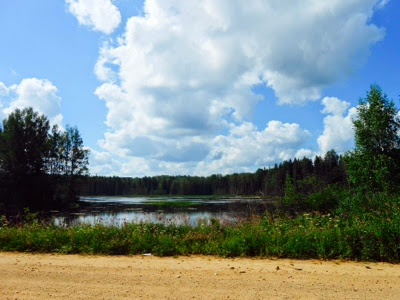 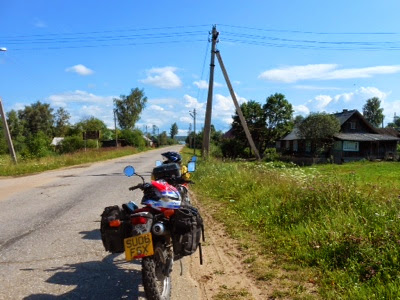 Alistair’s bike was playing up more and more, going slower and slower. That was a big concern as we   cannot leave a bike in Russia. If we leave a bike behind we would get in big trouble with customs. The bikes only have a temporary import permit and must leave within 3 months!
With the difficulty of finding hotels or places to stay in this part of Russia, we decided to stop at Staraya Russa, as it is the main town around and had 2 or 3 hotels. We came across one that looked very nice and stopped to make enquiries. It had space for one night and was reasonably priced, so we   took a room.
As the town was pleasant we decided to stay another day, although we had to change hotel, and for the same price than our nice first hotel, use the old soviet block style hotel. Never mind. 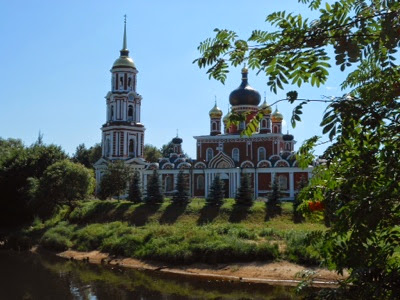 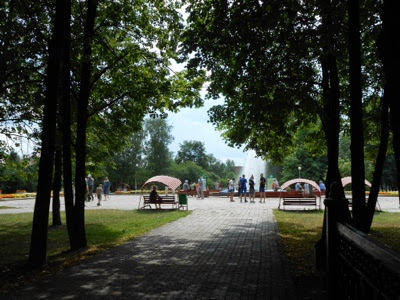 We spent saturday exploring the huge park and the town. 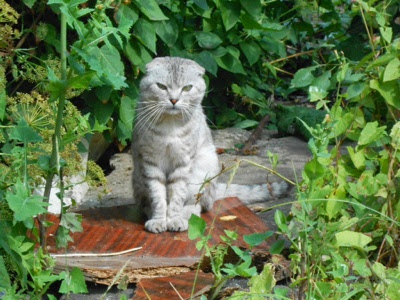 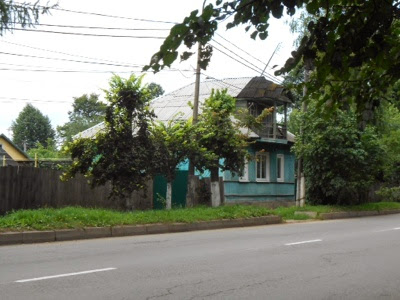 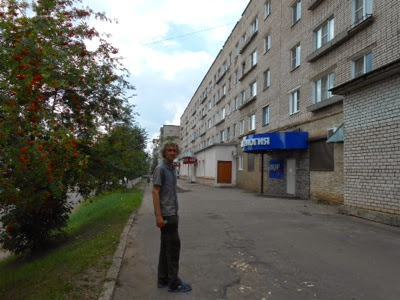 Then the sunday morning, we loaded the bikes and rode out of town. We stopped at a fuel pump on the edge of town to get fuel, then rode off….. Suddenly, I heard three huge Bang! My simultaneous thoughts were:

– WTF!!!
– OMG, someone is shooting at us!!? No way!?
– OMG, my bike exploded!?
I stopped, looked around, no one with a gun (!) and stared at the front of my bike and at my engine…
Alistair had stopped too….. He asked me what the problem was. I told him “what was THAT?”
He told me his bike had died. Again!
Apparently I did look shaken….. But those three explosions were terrifying!
We decided to go back to the hotel and look for a motorcycle mechanic or find a solution.
So, as so many times before, Alistair pushed his bike out of sight, away from the main road, and we rode my bike two-up.
I explained our predicament at the reception desk of the hotel and the security guard draw a map to show me were I may find a workshop. While Alistair went to get his bike and push it back to the hotel ( a good three or four miles!) I walked to the location of the workshops. It was a row of few garages, on a back road, with no sign of life.
When Alistair came back we decided to walk back to a shop we had noticed the previous day. We had walked in at the time, as it had a big Yamaha sign outside. Unfortunately, it was not a motorcycle shop but a boat and fishing shop, but it also had on show a quad bike for sale.
So our thinking was, if this shop sell quad bikes, they must know a mechanic! So we walked there and with my little bit of russian managed to explain what had happened and what we needed. They phoned someone and told us someone would come to our hotel an hour later. Result!
So we went back to our soviet style hotel and, true to word, reception called us very soon.
A mechanic was there, with his wife and 15 months old daughter in tow! His wife spoke a bit of english, so between her small english and my small russian we were able to talk.
After a while, between Alistair and the mechanic they managed to revive the bike. A short test ride showed that the bike would be able to continue, hopefully all the 300km to the border! As they were leaving, we asked how much we  owed, but the mechanic and his wife refused any money from us! How kind is that? The poor people, being disturbed on their sunday afternoon and the whole family came to help us !
Monday 21st July – about 150 miles…. Pskov (70km from Estonia!)
We finally managed to leave town! Riding slowly through the back roads, we decided to stop at Pskov, which is the administrative centre of the Pskovkaya region, so fairly big town! It also has a few hotels and a nice Kremlin. And motorcycle mechanics if we need! 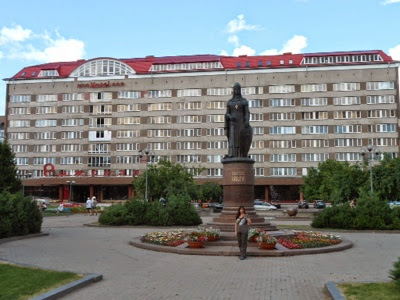 We got there early afternoon, Alistair’s bike keeps going slowly and surely we should be able to make it into Estonia tomorrow! Surely! What could possibly go wrong?! 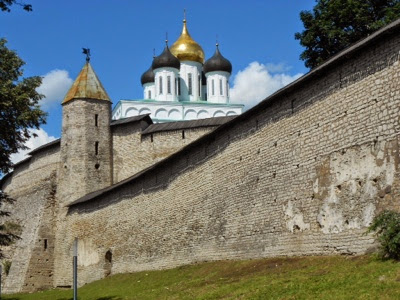 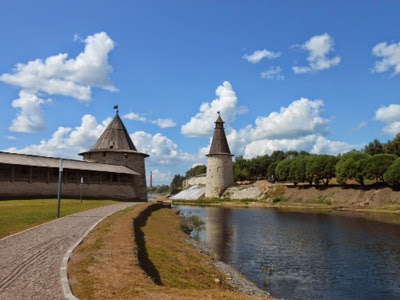 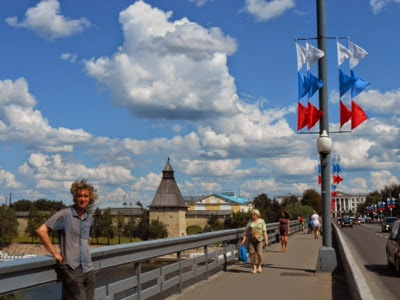