I woke up at 6. After all, as night falls soon after 5:30 and we could not wander in the village at night, there was not much to do. Our camp was dead, the small bar was closed as there was no staff to be seen anywhere, with no WiFi or anything else to do, we read a bit and slept early.

It is not wise (for tourists) to walk around after dark, we were told by the manageress at the Baobab.

I read a bit ( I am quite hooked by the Shetlands series and reading my way through the whole 7 books from Anne Cleeves) and by 7am we had a look around to check if there would be some breakfast. All was quiet, no staff around, so we walked, once again via the beach, to the Baobab beach camp. There were people having breakfast, there was a long menu to choose from, free coffee on offer… Paradise! I took an omelette with bacon. It was huge! I could not finish! 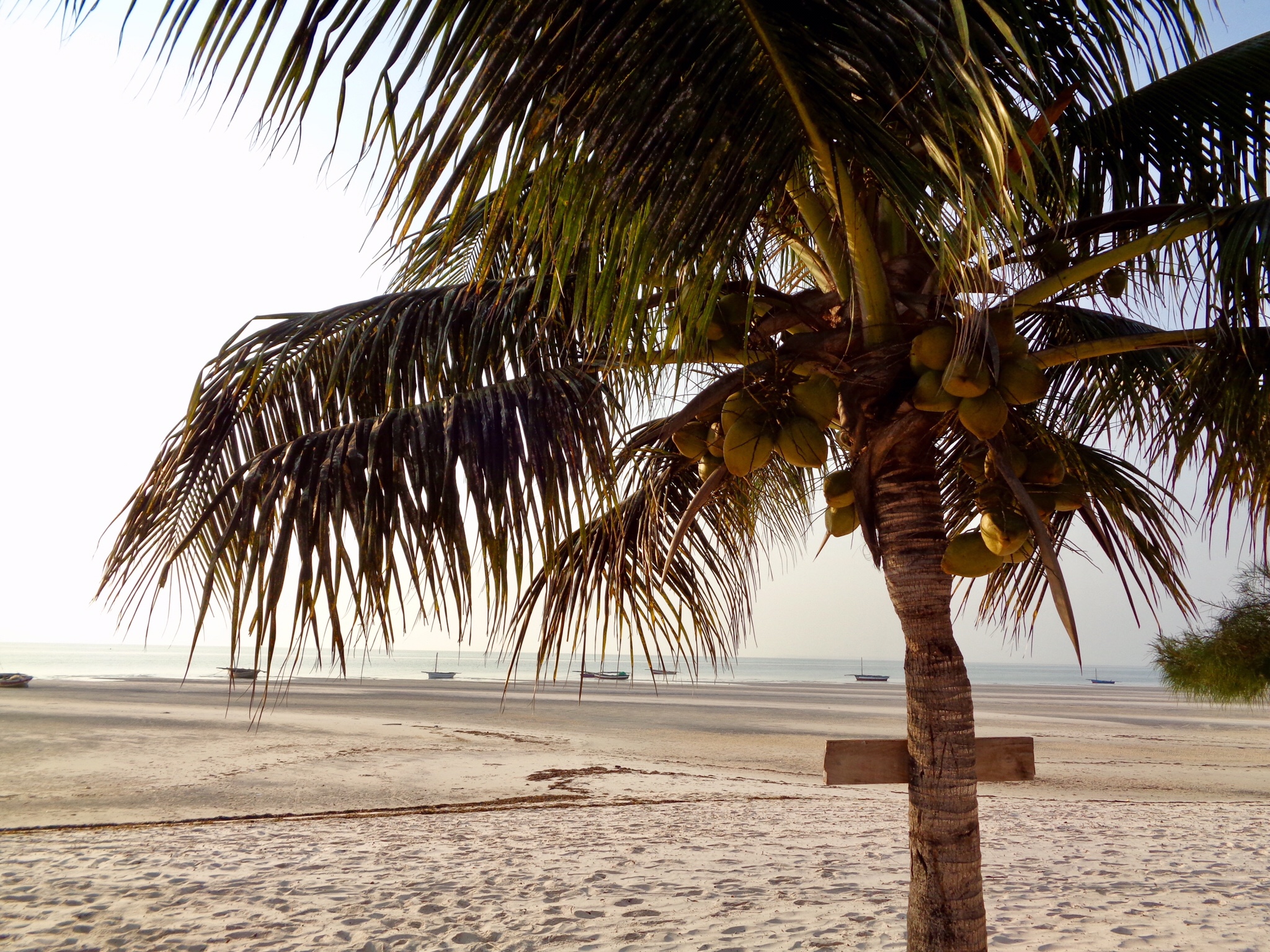 We used their WiFi for some planning and finding a place to stay in our next destination. We had decided to leave the following day, as our camp was ghastly with really unfriendly staff who treated us like we were an inconvenience to them. But as all seemed to be so fully booked everywhere, we decided to secure a place before getting to Tofo. All accommodation there was fairly full too but we booked a more expensive than usual, to us, place.

After that we went for a walk into town. We went back to the Baobab to have a drink and early dinner before dark. We shared a very hot pizza. As we were finishing, a family sitting not far from us offered us some grilled fish. They had been off fishing and caught a 1.5 m fish weighting a good 38kgs. They could not eat it all! It was delicious!

After that, completely stuffed, we went back to our miserable camp, before dark, for another early night. This time, with power cuts, it was really not much else to do.

We woke up at 6 am and started packing. The weather was very foggy but we were ready to go before 8. We stopped for fuel, at a bank to get cash. The fog slowly lifted as we travelled south.

It was very hot and we stopped few times for fuel and to drink. The road was in good condition so we made good progress. The many police check points did not pay us any attention. We arrived at Tofo by early afternoon. Tofo is popular with South Africans for surfing and diving so tends to e very busy.

Finding the guesthouse was another problem. The sandy and very damaged track that the GPS wanted to take through was really too damaged for us. Eventually, after a bit of search and faff around, we arrived at the Lobster Chalets. Our chalet was great, big, clean, with a terrace which contained a small kitchen sink and fridge. It was very luxurious.

The bar restaurant was on a roof terrace with nice view over the ocean. The WiFi worked, the bar was a Honesty bar and we were close enough from town to get supplies. Amazing place.

From the restaurant, every morning ( eating a huge breakfast!) around 7:30 am, we could see whales playing in the ocean. It was amusing to see, an hour later, when they were gone, the Zodiac boats, full of tourists, going all over trying to look for the whales! We just had to sit early morning to check them out!

We explored the little town and had a couple of excellent lunches at a little shack.

We also found a bar, on Thursday, that served Caipirinhas! A real taste of Brazil! I hope to be able to buy the sugar cane liquor used for this drink, somewhere in South Africa, before we get back home!

Most places I investigated online seemed still fully booked for our dates. I found the sunset beach lodge online. They had small self catering chalets and camping ground.

So we left Tofo after a huge breakfast and rode through few miles of sandy trails, picked up the tarmac and then the main road, the EN1.

We arrived at the turn off from Chidengueme early afternoon. Then it was 6 kms of sandy track to the lodge.

Why is it that everywhere we go, we always end up riding few miles of sand to get to camp? I hate sand! Riding sand is hard! This one was usual with sections of deep fluffy sand that sent my front wheel all loose. I managed to keep control and made it to the lodge. The day was incredibly hot and by the time I wrestled my bike through the sand I was drenched!

The camping area was just deep sand. The chalets were 2600 Meticals a night, so we took the comfortable option! We are turning soft in old age!

The place looked deserted but as we took the path down the beach we came across a group of South Africans fishing.

Back at the lodge, a family with 2 kids were lounging by the pool and then having dinner. By dinner time, half an hour after we ordered dinner, a large group of Italians ( 10 or 12 of then ) turned up. I knew what would happen. Those organised tours usually pre order their food. While the cook prepared their food, we waited. 2 hours after our order went off, we finally had our dish, after the Italians got theirs.

A very long wait for a very disappointed dish or bland undercooked ( even some raw) chicken and bad rice. I did complain with my (non existent !) diplomatic skills! Not that the staff gave a crap about it. But I like to complain! I am French, I am good at that!

The next morning, as Alistair was not feeling too well, and our confidence on the Lodge’s cook skills was at an all time low, we decided to self cater. We had some left over bread from Tofo and some peanut butter. So that was breakfast with coffee.

Then Alistair took my bike and rode to the village. From the various little shops, he came back with some onions, a green pepper, a can of tuna, a can of beans and a can of chopped tomatoes. And some spicy powder. With all that I cooked a nice and full of flavours dish for lunch and dinner. The onions and peppers are incredibly sweet and full of taste, in this region.

I tried to do some planning, but without WiFi, it was difficult. As it was a big bank holiday in South Africa, we suspected that the border point would be very busy and with long queues on Sunday. I had booked a hotel in Nelspruit, South Africa, for Monday night, and we also had ordered tyres from a motorcycle shop, over there. The town is only 100kms from the border. We though it would be better to cross early Monday morning and avoid long queues. The best laid plan…..

We left the lodge early, at 8am, as we had a long way. As we made good progress, we decided, on the way, to just get to the border. The ride was not fast as it was busy with trucks hard to overtake. The road had only 2 lanes and constant incoming traffic. Despite this, we got around lunch time near Maputo, the capital city. We caught the ring road to get to the road going west to South Africa.

The road was not fully built. As one lane was cut, some young lads tried to stop us,saying there was a diversion. Alistair, being as usual very British and polite, stopped. As I saw trucks and car continuing, and being French and rude and grumpy, I waived the kids out of my way and continued. Whatever scam they ran I would be no part of it. An expensive looking saloon car went past and made us sign to follow it. As the road ended, we follow the car through sanding tracks, with the rest of the traffic. Eventually, we got on the right road, with nice tarmac. The driver signalled which way we should go. We thanked him by waving and got on our way. So we did not part with one single Metical! humbug!

Soon before the border, we stopped at a fuel station to use our last Meticals. Then we went to the border. Immediately, as we entered the compound, we were surrounded by a crowd of men who ran along or bikes and surrounded us as we parked the bikes. As you may suspect, with my sunny and charming temperament, i was a already shouting at them !

One guy, with a badge and a hat that looked kind of official, demanded our passports and that I stay with the bikes while Alistair had to follow him. I shouted at the crowd to disperse and leave us alone, in my most diplomatic style. The official looking guy took our passports and took Alistair to customs.

Alistair snatched the passports back and asked the customs official if he knew who the guy looking kind of official, was. The custom official shrugged, not knowing. Alistair stormed off and came back to the bikes with our passports. All scammers gone. We walked to immigration and had our passports stamped quickly, then went to custom. The custom guy did not know what to do with the Carnets but was happy to follow our instructions and stamp and sign them.

So we then rode to the South African border. Things were a little less hectic. We got our passports stamped in. I made clear we had our plane for the 19th of September, so needed 2 months visa. You see, after one spell in SA, they only give back a transit visa these days. It seems to be the latest policy to avoid people living in SA and doing the border cross to renew their visa every 3 months! So the policy now is, if you already had a 3 months visa, to only give you 7 days. We got 3 months without any problem. I worry too much sometimes.

Then we went to custom. They are not used to Carnets. This is when we spotted that Alistair Carnet had not been stamped correctly and in the right form, when exiting Mozambique. I usually check everything is correct with the Carnets. This is very important as we could be liable to massive import tax for our bikes, if our documents are not properly showing that the motorbikes left each country we visited. But this time I did not check Alistair’s carnet! So while I got my carnet filled for entry to south Africa, Alistair went back to the Mozambique side to correct the error. He had it done without any difficulty.

We were then stopped at the border zone exit for a quick search of or panniers and a chat with the bored customs guys.

We had , on the way, decided to stay the night at Komatipoort, the border town. It skirts Kruger National Park and had plenty of accommodation. I had spotted a backpacker place few days before, when we had WiFi. So we rode there. As usual, the GPS took us via the scenic gravel roads rather than the most direct tarmac road. This time I did not begrudge it, as it took us through a beautiful road and across a stunning little lake.

So, back in South Africa! We still have 5 weeks left to explore and there is plenty of that here! Can’t wait! But first, new tyres and some bike maintenance in the next town!

That’s all for now folks!

Do you carry a stove?