We left the cabin in the woods ( and the millions of mosquitoes!) after a quick breakfast of yogurt and juice.
The road to St Pete was very busy. Often we were pushed out by cars overtaking very close to us, despite oncoming traffic, or, cars overtaking trucks, in the incoming traffic, bullying us out of the way.
I did some Advanced Riding with the IAM ( institute of advanced Motorist) and if I rode following the position rules they  advise, I would last a nanosecond before I became as flat as a hedgehog lost in the motorway!
Anyhow, we arrived near St Pete and the road turned into a massive motorway with spaghetti lanes out everywhere, confusing even our GPS! Then a bridge was closed, causing chaos and more deviations in big downtown traffic jams. After two hours in the traffic jams we finally found our hotel, near the Town centre! It was about time.
We parked the bikes just in front of the reception desk in the private parking. Safe area, so I was happy!
We did not do much more that day.
Overnight, I was sick… Maybe dehydration, fatigue… It happens. The next day we took the tube to the centre, and took a boat tour by the canals… The metro system is easier to navigate that in Moscow. 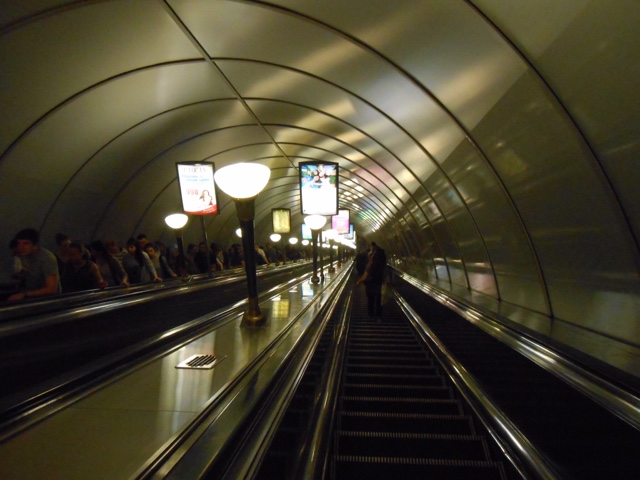 The guide was all in Russian ( very few boats in English!) so we took pictures and rested in the little boat.
In the evening, we met with Eli and Chezarina. They were kind enough to come to our local metro station.
We went for a drink at a local pub. When you are a biker, you have friends everywhere… And Russian bikers are very welcoming! It was really nice to meet with them and get some advice as well.
The architecture in St Pete is very Italian, for a good reason. I am currently reading “The Romanovs”, by Virginia Cowles. Quite eye opening!
St Petersburg was founded by Peter the great, a top guy who sent his first wife into seclusion in a Convent ( so he could marry his mistress, forget about divorce!) and killed his son from his first wife, because he thought he was too much of a wimp! Top guy like most of the Romanovs. The son, Alexis if I remember his name, was so scared of his father that he fainted when he was summoned for an audience !
So St Pete was founded by Peter the Great. It is estimated that 200,000 people died building it. The Tsar was against cutting trees so the poor people were only allowed to boil water once a week only. 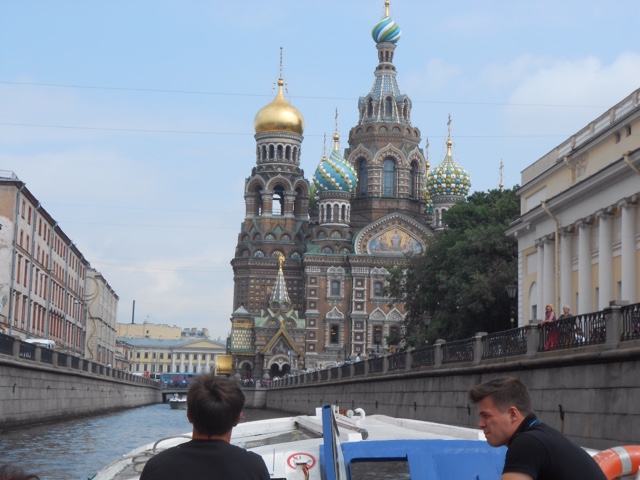 During the Romanovs, there were two classes, the land owners nobles ( about 5% of the population) and serfs. Serfs were like slaves. When a guy pleased the Tsar, reward would be land but also say 5000 or 10000 serfs! Family meant nothing, children could be taken from the parents, wife from the husband, they were just slaves, owned by landowners.
As a result, there was never any middle class in Russia at that time.Therefore, all skilled jobs, like architects, engineers, astronomers, doctors and so on were all foreigners, often Germans engineers,  Italian and French architects, doctors…. Hence the very Italian flavour of St Pete. 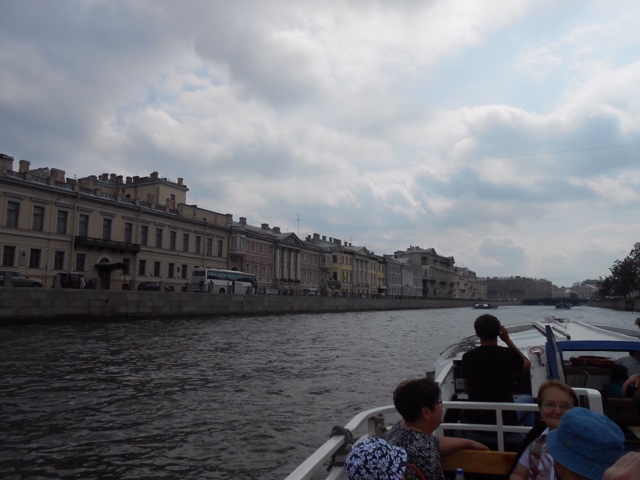 Reading the book I can see how the revolution was truly inevitable. And why the people put up with so much afterward… Because their situation before was near slavery.
So really, forget the road of bones. St Pete is the city of bones! 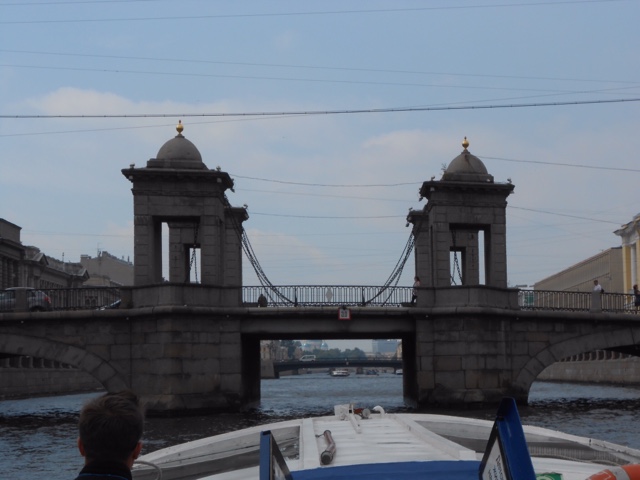 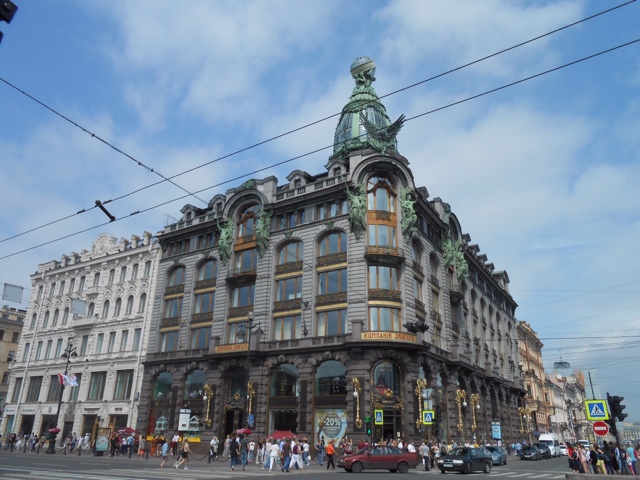 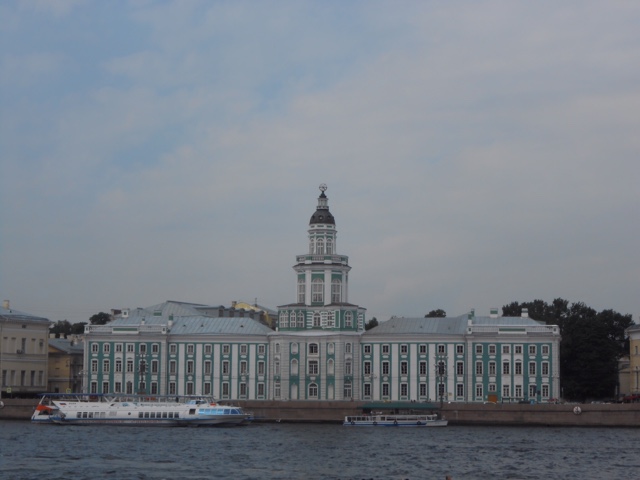 On Sunday we visited Peterhof, taking the express boat to get there, as it is about 20km out of town.
Sunday was very hot so it was nice to wander round the beautiful gardens. 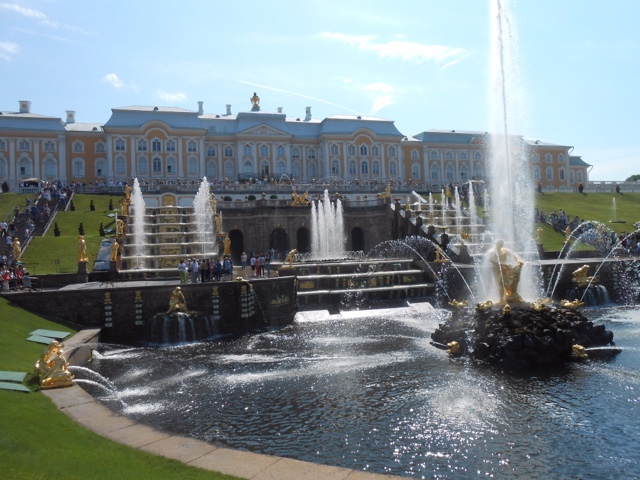 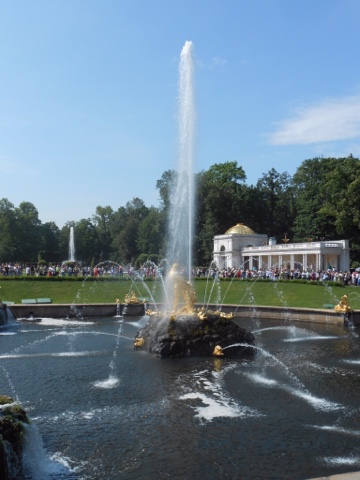 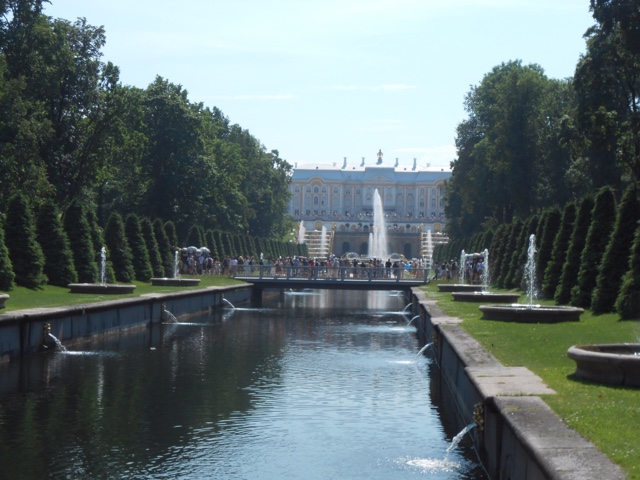 We passed on visiting the museums… We live in London and I can have my overload of looking at dusty paintings anytime!

Today Monday, I am sorting out our itinerary for the next few days while Alistair is changing the oil on the bikes.
My problem is with the Solovesky islands.
Our travel guide talks about a ferry to the islands, but a passenger ferry only.
Not sure we could take the ferry with the bikes. And without, it would be difficult. It is not only a question of finding a safe parking for the bikes, it is also a question of what to do with all our motorcycle gear ( helmets, boots, jackets and trousers)! All these are very bulky and cannot be attached to the bikes. And we cannot take everything with us, we would need help to carry all!
Also, none of our bags are lockable , anyone can open the bags and take what they want!
So it is very simple. We either can take the ferry with the bikes, or we cannot go! Currently trying to find out!