We woke up very early in  our Gers! Mainly because it was so cold! Alistair got the wooden  stove going, which involved using some fuel to start the fire!

After a breakfast of coffee bread and spread, we went for a walk. Across the river, there were some herders’ gers. They had motorbikes and I had observed that they were crossing the river at a different spot that the one used by cars, and us, the previous day. For crossing rivers in Mongolia, it is useful to observe where the locals on their little chinese bikes do the crossing. It is rarely the spot used by trucks and cars. 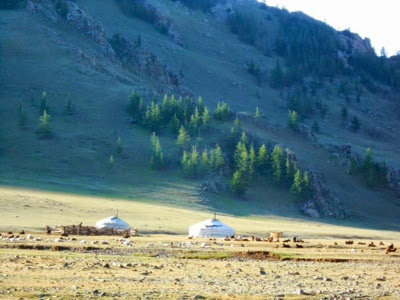 The previous day we used the crossing for cars and trucks, and it was rather deep. This morning I was not keen on getting water inside my goretex boots! We found a much shallower crossing.
So we  packed up and  used that crossing. It had big round river bed peddles but it was no worries with our little bikes.
This time we were seriously expecting the road to get better. Tsetserleg,our destination for the day , is a very touristy town!
We got back to Tariat, and found the correct direction toward Tsetserleg. We followed the usual nasty trails, across steppes  and more steppes. The valleys were littered with garbage, a very  depressing sight, as  the locals seem to discard about anything on the ground, anywhere. Picnic? Just leave the tins and empty cans and bottles! Drinking vodka? Just smash them. There are smashed bottles of vodka and beer littered all over, as well as plastic bottles, not only along the tracks, but all over the steppes. The amount of empty vodka bottles is worrying! Drink driving seems to be a big problem here. Once the roads are paved and they can  drive fast, the fatality rate of road accidents will rocket I guess.
After a while we stopped. We met a biker on a rented chinese bike, from Ulaanbaatar. He told us the road would get better… And it did! Tarmac at last! 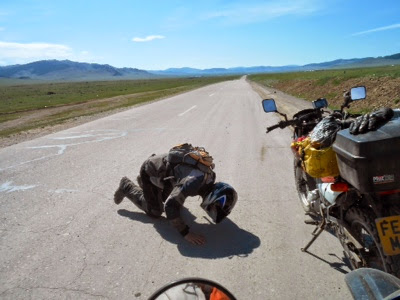 We finally got to Tsetserleg by mid afternoon. Obviously, as you may suspect, not all the way was nice smooth tarmac. We crossed plenty of road works. Now in Mongolia,  Roadworks mean that trucks and cars randomly create tracks in the sand, by the side of the road. You end  up with deep sand tracks as a result!
We finally got a place with hot shower!
Friday 4th of July – Tsetserleg, 0 miles
We decided to spend a day rest in town. We were incredibly tired and I felt all my muscles ached from the intense riding involved in the last few days. We did not do any visiting, but we found a place owned by a British guy, which served really decent food, although the meat still  tasted disgusting.
The problem with meat here is that they don’t seem to use fridges. We crossed the local market, which was next to the meat market / abattoir, but in a separate building. The smell of rotting meat was overpowering! It was vile. So we try to avoid meat in Mongolia…..
Saturday 5th of July – Ulaanbaatar (UB) –  300 miles
We left town mid morning, due to late serving of breakfast. People don’t seem to work early in this country. Ever!
We were told the road was paved all the way. It was, except when it wasn’t, usually due to the tarmac being so  damaged that it was impossible to ride through, or the many road works!
We finally got to UB rather late and found a hotel in the west part of town. The traffic was insane, aggressive, dangerous, and we did not fancy to cross all the town, so we picked  a  place near our arrival into the town. As we need to use  the same way to pick up the northern road, it avoids too much riding around UB.
Sunday 6th of July – UB
We took a taxi to take us to the colossal statue of Ghengis ( Chiinggis as they spell it here!) Khan. 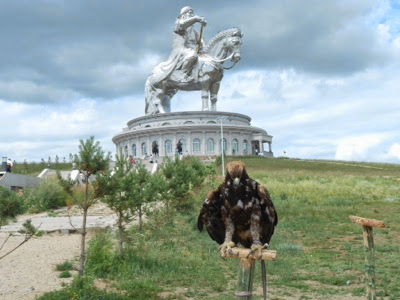 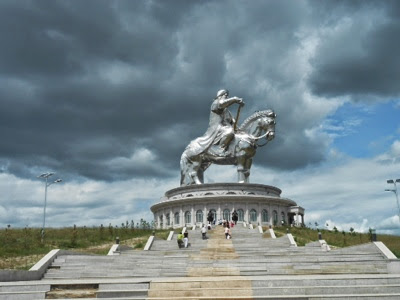 It took almost two hours to get there. We crossed plenty of road works. As usual the traffic was diverted to the sides. As the traffic was very dense, with many trucks, the tracks got deeper and deeper Into sand. As a result we  saw several trucks completely stuck in the sand, the drivers using shovels and tools to dig the wheels off the sand! Insane. We were glad not to be on the bikes! 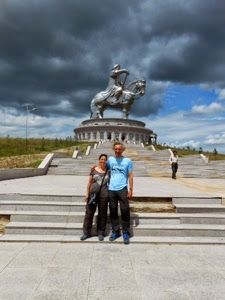 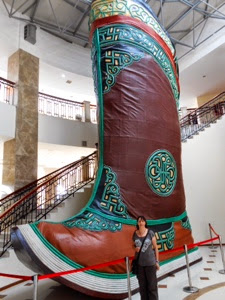 In the evening we quiet fancied some food. Alistair founda  chinese restaurant around. We thought food would be ok in the capital city, but it was vile.a nd the chicken was anything there!urgh. I think I will stick to  poot noodles and tins of sardines until Russia!
Monday 7th of July – UB
We were planning to leave town and ride to the border with Russia, but huge overnight storms and rain and continuous rain over the morning made us reconsider. We don’t mind rain, but there was a lot of flooding. Now, road works, sand, deep sand, horrible tracks and flooding, are never a  good combination on two wheels. Add intense traffic and crazy drivers, and we decided to  stay put for the day!
For those interest on this sort of things, we completed nearly 10,000 miles with our bikes, since London, not including ferry rides and miles done on the back of a truck!
Now we will not ride as much to get back home, as we plan to take the trans-Siberian train, with the bikes, from Irkutsk to Moscow! Keep reading to see how we get on!

where is the road?