After a quick breakfast at the campsite ( coffee with bread and peanut butter) we packed the tent and rode off. The border was about 130 kms south and although a section of road was bad with potholes ( all relative, nothing can compared with Mozambique!) we made good progress.

Getting back into South Africa was very fast, a quick stamp out of Swaziland, and quick stamp in on the passports, into South Africa and we were off again. We decided to avoid the main roads and take secondary roads through Kwazulu-Natal as the region (or state?) is called. This is Zulu land. We passed many sugar cane plantations and farms. By mid afternoon we arrived at a town called Vryheid.

It was nothing much but had lots of B&Bs. We stopped at one and declined. The second and third were still very expensive! A good 800 to 900 rands for an empty B&B! I am not sure if they fill at the weekend, as there seem to be not much around to attract tourists, but we decided to continue to Dundee. I had spotted in iOverlander a caravan park there and decided to ride there.

Few kilometres from Dundee, we saw a sign for a resort. They had a campsite too. We decided to investigate. By then we were a bit tired. The place was huge, with rooms, rondavels ( round houses ) and little square chalets, all with en-suite bathrooms. The chalets were only 500 rands so we decided to take one! It was luxurious, with TV and plenty of channels, a nice hot shower and amazing grounds.

The restaurant was a buffet and rather expensive, so Alistair rode to the nearest supermarket and came back with dinner.

I had found this campsite and resort through iOverlander again. It had rave reviews, with wild animals roaming around, so we decided to get there. The place was around a big lake. We got there relatively early afternoon. The accommodation was half price as it is low season. So we got a big rondavel with kitchen and all we need for 460 rands ( about 32 dollars !). Reception was at the entrance of the reserve with the rondavels a good 7 kms away. We rode to our accommodation, surrounded by many type of antelopes and zebras. It was amazing.

Once settled we went for a walk and realised, from a sign, that the Reserve also had white rhinos! I was amazed we were allowed in with the bikes as well as allowed to walk around on our own! 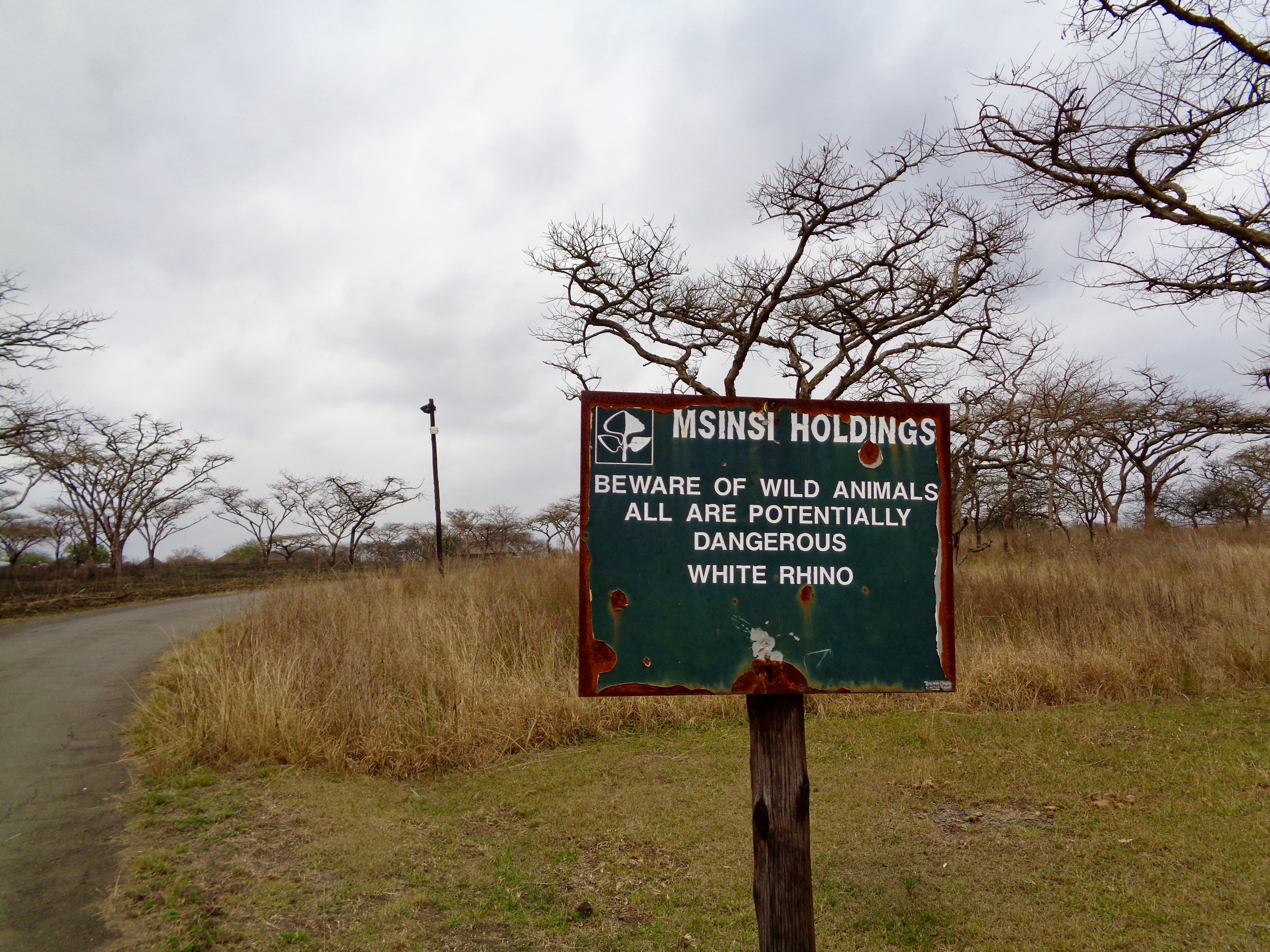 The next day, after packing, we decided to have a ride around before leaving. At a turn of the trail thee were 3 giraffes grazing. Thankfully we did not come across the rhinos. 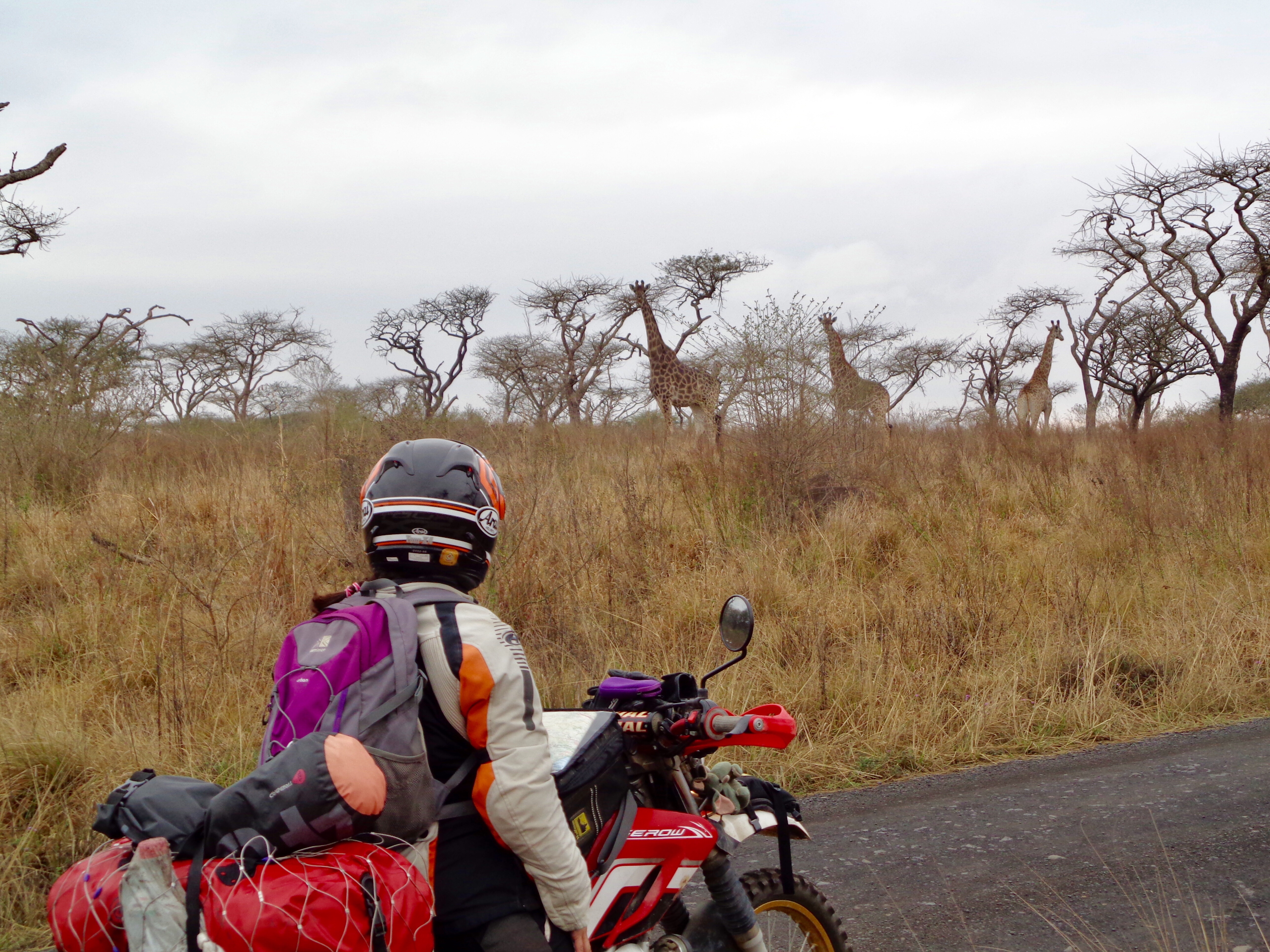 Then we rode to south of Drakensberg. The backpacker place we selected was well located at the foot of the Sani pass and had great grounds, a big kitchen and lounge with a nice fire, large rooms and spotless communal bathrooms. The place was cheap and very pleasant.

The place was busy and we met with the same French couple we met in Swaziland, in our first stop there! We met few people and it was nice to socialise a bit!

With the sky overcast, we waited until 10am to leave. The climb to the pass would be rocky, we had been told, and we wanted to make sure we would get no rain. The sky cleared and we left. The first few kilometres, on the South African side, the road was just a massive building ground with trucks everywhere. It was a bad trail but nothing hard for us with our bikes.

The border crossing out of South Africa was very fast. Then we started on the no man land between South Africa and Lesotho trail. We were told later that it was the worse it had ever been. In the past it was a gravel trail. Not so now. It was like a river bed with rocks and large boulders. There was no respite and little opportunities to stop. With the bikes, we had to keep traction and speed, overtaking all 4×4 and trucks on a narrow mountain road, while getting over, skipping and jumping over massive rocks. Despite the cold, I arrived at the top of the pass drenched in sweat. The difficulty of the trail certainly kept me focused, one mistake and it would have been a long way down the cliff! On wet conditions it would have been way too dangerous, with slippery stones!

At the top of the pass we passed the Lesotho border and then stopped at the highest pub in Southern Africa. There we met with 2 bikers on big BMWs, they had also climbed the pass. The guys were super tall and big and i can imagine only strength and power could haul a 250 kilos bike up those rocks!

After lunch we had the coordinates of a camp or lodge. On paper it did not look too far. We had not counted on the several mountains passes at 3300m high and the many villages on the way, with farm animals roaming free, forcing us to ride slowly. It was a long day. Lesotho villages looked a mix of traditional round houses and brick square houses. They seemed to have electricity and we saw plenty of satellite dishes. Men were often herding animals, either walking or riding horses.

The mountains were beautiful but it was bitterly cold.

We went up and down mountains. Eventually, by 4 or 5 pms we found the turn off to our night rode through a very bad trail into a village and then a farm compound. The place had various rondavels, no running water and pit toilets. For 350 rands per person we could get accommodation, dinner and breakfast, so we took the option as we had very little with us to cook.

The rondavel had no electricity but the main house did. There was nowhere to sit or get warm. As we were standing around in the courtyard, a van with a French/ Spanish couple living in Mozambique turned up and investigated the place further. We managed to sit in the farm family living room, with a gas heater on. At last we were able to get warm.

Dinner was simple. Some nice chicken, fresh tomatoes, spinach with pap ( white corn purée – rather tasteless but used to pick up food with your hands).

After that it was an early night.

We have our tickets

where do you start?