Finally  we were able to leave Bishkek. Riding out of town on the main highway was slow going as it was town after town after town. The main road go right across each town, bazar, market, and the crazy traffic that goes with it.
We then stopped to pay 5$ each to use the highway. I use highway very loosely here!
We finally started to climb for our first mountain pass of the day. The road was twisty and steep. Up and up it went, hair pin bend after another… It was beautiful, if only the drivers had not been that crazy. It certainly kept us on edge as we tried to stay alive on that road.
We finally reached the highest point, over 2500m altitude. Our bikes were behaving fine.
We then crossed a very long dark tunnel for several miles. The headlights on our bikes are pitiful! The tunnel was narrow, busy, with drivers all over the place. Although the highway is only a dual carriage way, they have no concept of lanes so they keep swerving all over the place.
As Patrick told us, they drive like they ride horses! When you know that here you buy your driving licence, they have no idea how to drive!
On the other side, we started descending, then crossing a stunning high valley. There were many yurts along the road, selling Kimiz (horse, well… mare, fermented milk) and balls of hard dried cheese, probably from horse milk too. 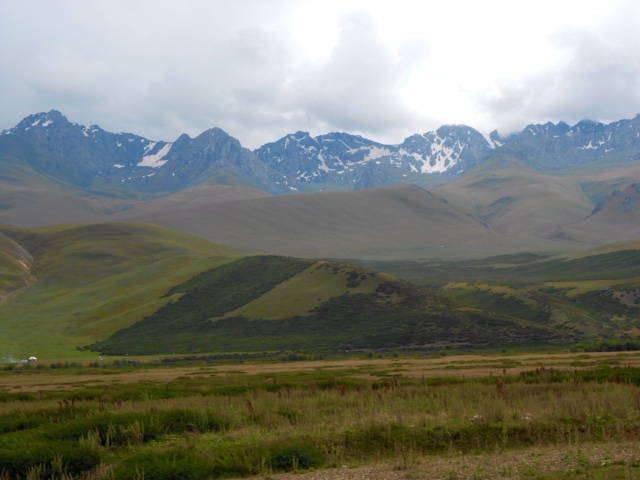 There were many horses and some livestock roaming free for miles on end. There are no fences in Kyrgyzstan. It’s a bit like Mongolia: wide open spaces. 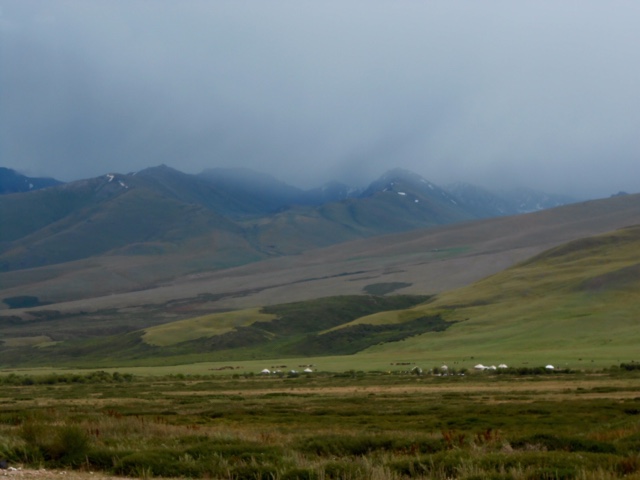 Population near the road meant aggressive dogs attacking the bikes. We tried our best to avoid running one over as they jumped toward our front wheels.
The weather was very cold and then it started raining heavily.
We climbed another pass and went slightly down. 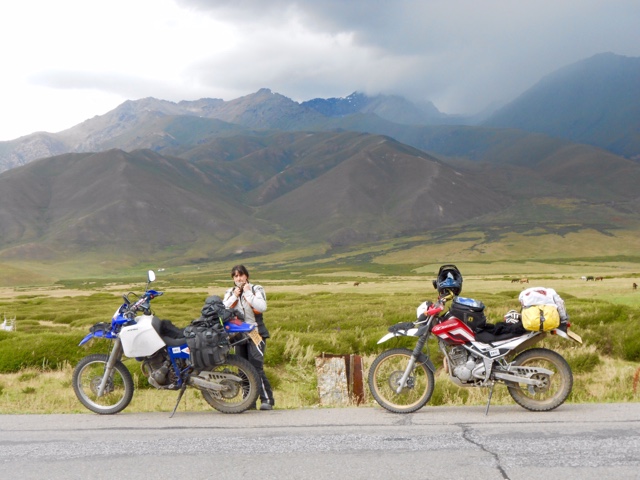 With so much traffic and trucks on the road, our progress was slow. We were planning to stop midway to Osh, in Kara-Kul, a non-descript town. However, we were so cold and rather tired, by mid afternoon, so we decided to stop for the night in Toktogul.
We knew Toktogul well. About 30kms from there, 2 years ago, Alistair’s bike decided to die and we had to hide it in a ditch ( it was very late) and  spend the night at an empty half built hotel in town!
Riding around town for a guesthouse, I managed to find where the hotel was. It was now quite busy. Funny enough, we had the same room than two years ago. This time we had to share the bathroom  and toilet with lots of other people. The place was full at night!
We had time to have  a walk in town but there was not much to it. We went to get some food at the same ( and only !) restaurant than two years ago. They had now a big garden and with the warm evening it was nice to get a small meal outdoor.
Day 68 – Wednesday 17th August – Osh – 410kms
After a quick breakfast we were back on the road by 9:30.
Once again, the mountain road was very beautiful but slow going. 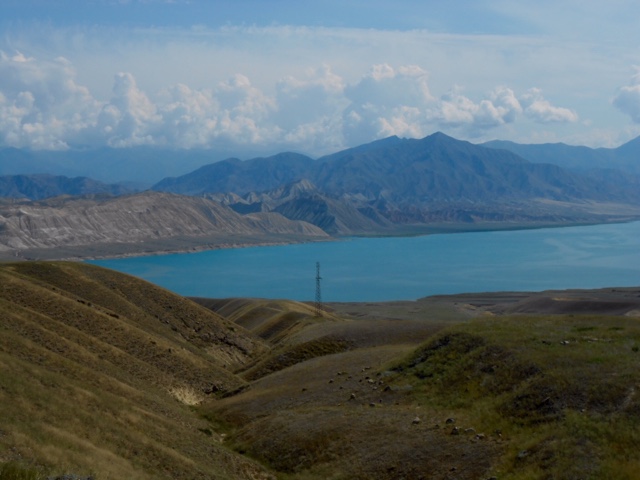 After crossing one town, we got stopped by the police. They are everywhere these days! Apparently, Alistair was speeding, going at 72km/h on a 60 zone. As there are rarely speed limit signs, we could not argue. Apparently, I was not speeding despite being just behind Alistair!
They started taking the driving licence and bike’s V5. The chief, fat ( police cops Chiefs are always fat and always sitting in the car while barking orders to his minions, we found!) … Anyway, the chief told us it was 100 dollars and we would have to go to pay at the bank in Toktogul. I knew what was coming.
We did not react much, waiting to be asked for cash.
Then he said if we paid 1000 Soms with our credit card ( about 15 dollars) we could leave.
Obviously, as you can imagine, none of our cards would work. What a surprise!  So he wanted cash.
Meanwhile, I had removed discreetly most of my cash from my dummy purse, leaving about 650 Soms.
I showed him my purse with the cash. I gave him the purse… Maybe he felt embarrassed, but after a bit of a huff, he took 500 Soms (about 8 dollars) and we were able to go. We made sure to ride at 60km/h every time it looked like there was a house or anything that may be like a village!
Funny enough, very late in the evening, in the parking of the Hotel Osh Nuru, we met a group of bikers from Poland, on brand new shiny BMWs, ( obviously transported there by Chris’s company!) loaded with tons of luggage, plus a support vehicle, and all the unecessary kit you can imagine… Anyway, 3 of them got stopped also for speeding… They were asked 200 dollars each, to start with… They ended up paying 50 dollars each! Ouch! 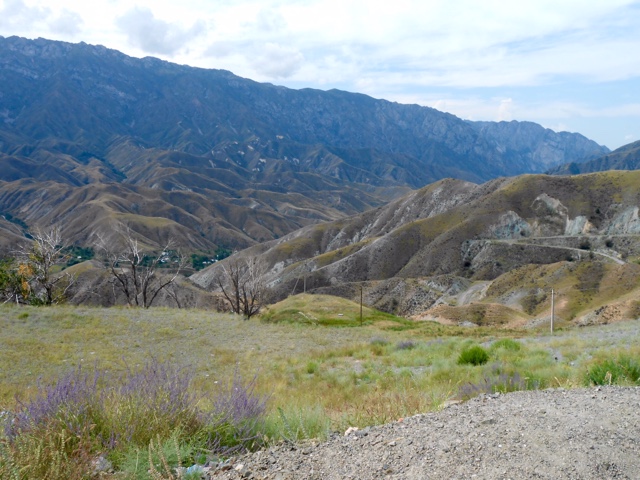 Eventually, by 6:30 we arrived in Osh. We went straight to hotel Osh Nuru. We had been staying there two years ago, after Alistair’s bike blew up in Uzbekistan, and we replaced the engine by a Chinese copy, thanks to Kolia, Patrick’s very talented mechanic.
Back in London, we had met few times with a young couple, Anna and Howard, who were planning to ride to Mongolia. They left in July and had a different itinerary than us, but they were in Osh for few days. They had just rode the Pamir. We arranged to meet that night at the California Cafe for a pizza and exchange some tips!
Day 69 – Thursday 18th August – Osh – few miles
In the morning we rode to Patrick’s house. Patrick is the business owner of Muztoo and runs motorcycle tours in Central Asia. He also provides services and occasionally spare parts, to travellers. He has a good workshop so you can also use the place to do repairs on your own vehicle.
As we arrived, there was a massive custom made bike with an enormous sidecar attached to it! A German was working on it. Then his friends turned up, on two bikes and another “trike”.
Kolia was busy in another job. So Alistair took out the carburettor.
Long story short, 195 dollars laters, the TTR was fitted with a new more narrow jet and the needle dropped to its lowest setting to ensure the bike runs as lean as possible.
My XT250 was fitted with a new back tyre, as the existing one was pretty much at the end of its life. I got the same tyre than two years ago, a Korean Shinko. They last forever.
We also bough another jet even more narrow, just in case!
The TTR also was fitted a roller above the chain, to avoid the chain to flap and destroy the frame. In rough tracks, the chain was flapping a lot.
Anyway, all that took most of the day as we also had to go back and forth to pick up some stuff from the hotel.
In the evening we met with Anna and Howard for dinner. They were leaving the next morning.
We also managed to do a lot of laundry. The hotel washing machine was broken so we had to do all in the bathroom’s sink! Fortunately, the weather in Osh is super hot, so all was drying quickly in our small balcony!
Day 70 – Friday 19th August – Osh –
After some more laundry done, we walked to the main bazar. We bought a large bag. We had decided to leave all our camping gear in Osh, with Patrick, while we rode around Tajikistan, and pick it up on our way back.
The bazar: 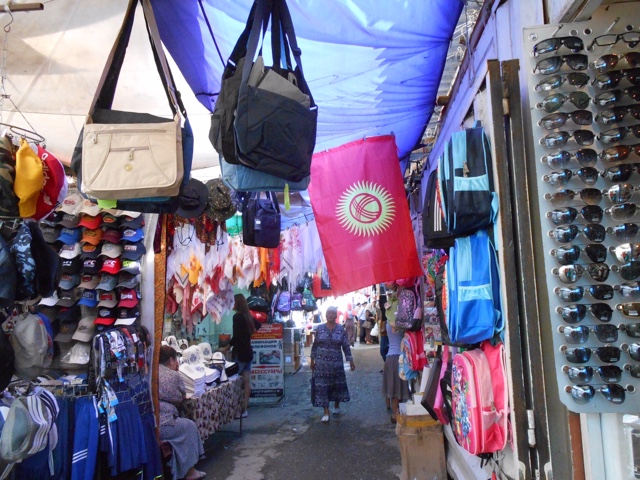 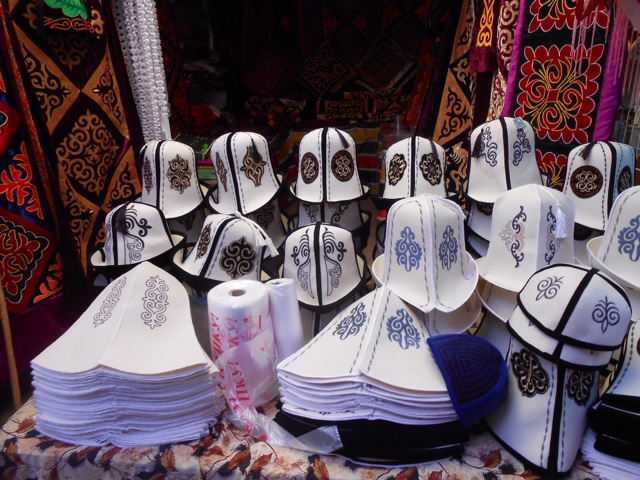 The bazar was as enormous as before! We found  quickly what we needed and came back to the hotel. We filled the bag with all we could do without for a couple of weeks! Mainly the camping gear  and cooking pot, stove etc…. It was  a lot!
Then, after a quick lunch of Plov at a  local cafe, Alistair took the bag to Patrick’s house.
We were planning to buy some food ( high energy bars, dried fruits, nuts etc…). We knew what to expect in term of food ( and food poisoning!) in Tajikistan, and I am determined to avoid any meal that may be of the ” food poisoning ” type! Hard to tell I know!
Most places in the Pamir and the Wakhan corridor are home stay, and include usually all meals…
Home stays are Just in people houses, in tiny villages, that have no running water, no toilets other that the hole in the ground type, no showers, no fridges, rarely electricity and probably not the same sense of hygiene, when preparing food, as we may expect in Europe!
The principle to follow is the same than in Africa: if you can’t peel it, cook it or boil it, forget it!
So departure tomorrow. We will be most certainly offline until we are back in Osh. Maybe 10 or 15 days…. I will report back when I can! Wish us good luck! 🙂