Saturday 17th of May – zero miles.
At 9am, Dilshard took us in his chevrolet, to a bazar/ market where we found a russian inner tube, similar to the one i got from Nukus. That would do as spare!  We also bought a 5 litre container for extra fuel.
On the way back, we stopped for Dilshad to get some flowers, it was end of 4th grade of his 9 year old daughter, an important date for school kids here! We then went to the school to give it to his daughter, so she would give to her teacher. Everyone in and out of school was very elegantly dressed!
Women and children in Uzbekistan seem to be very well dressed and taking great care of their appearance, somethingw e noticed also in Russia and Georgia! Men tend  to be a bit more scruffy!
Later on, Dilshad took us to his fuel provider! We stop near a house and an old womens old us fuel out of the usual 5 litres bottle waters! We had enough to fill the tanks, fill our 8 litre fuel bladder and also the extra container.
Alistair then spent some time working on the bikes doing maintenance. We also went back for another walk around the old town. 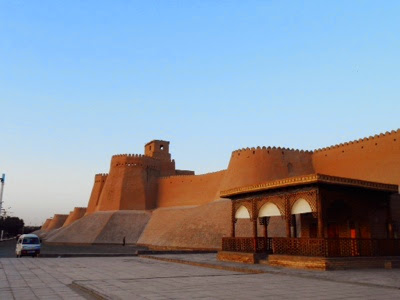 Sunday 18th May – 296 miles. Bukhara
We left Khiva relatively early, trying to make the most of the cooler temperature of the morning. Soon we would roast! We thanked Dilshad again, he had been very kind and helpful with us.
We went back through Urgench to pick up the road to Bukhara. We saw our first fuel pump selling benzine, that seemed open! Maybe things will get better?
After that we crossed the desert again, long stretch of straight road in intense heat, with no distraction. Sometimes the road was good, sometimes it was very bad.
Now, if you think we are crazy! Mid afternoon we overtook a cyclist alone. We stopped to check if he was ok and had enough water. Stephen is from Dublin and riding to Beijin. His website is dublin2beijin.com.
We then continued, and , about 80 miles from Bukhara we came across a fuel pump saying it had benzin! In the middle of the desert!
The place was dead. I knocked on the cashier’s window… Nothing. Then a couple of Uzbek cars stopped and started with their horns, making a massive racket! Eventually a sleepy guy appeared behind the till window! We got 6 litres of fuel, that was all we could buy as we did not have enough soms! Enough to get to Bukhara though! 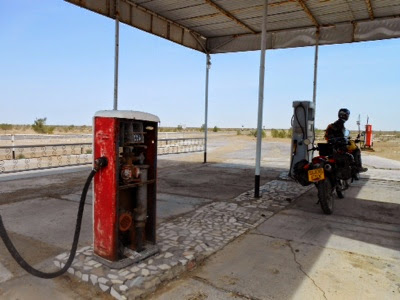 By 5 we arrived and found a nice place to stay.
We changed 50 dollars and got a brick of notes in change: 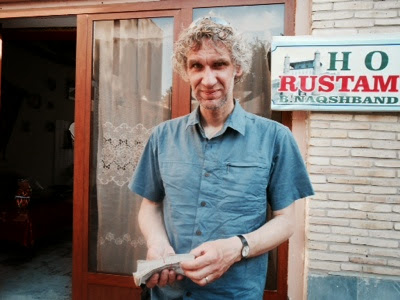 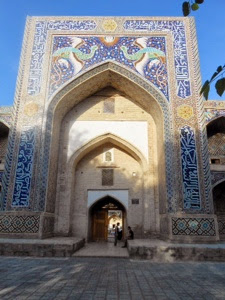 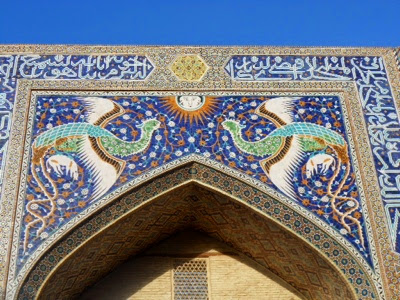 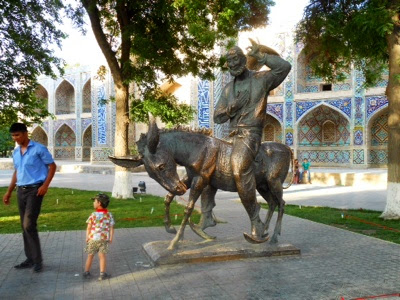 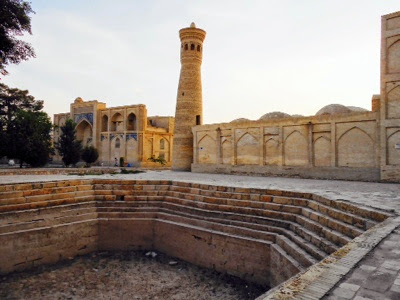 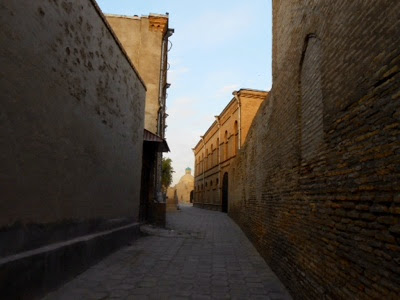 where is the road?