After a week in Samarkand, my ankle and hand had improved enough that i could ride. For my hand i could use the “cruise control” a very useful piece of plastic that fits in the right handgrip and i can use the palm of my hand to control speed! Very useful given the circumstances… I was not able otherwise to ride! And i certainly could not use my front brake! The foot brake would do!

So, that day we got up early as we wanted to make as much progress as possible.
However, we were told that the president, or some family member of the president of Uzbekistan, was visiting town, and as such, the town was locked. No one could leave and enter the town, and all traffic was banned from all main roads! It would be most of the day!
Hotel Emir was increasingly looking like Hotel california, you can come anytime you like, but you can never leave!
We sat around and chat in the courtyard, with other guests. A german couple was very pissed off as they had booked and pay for a hotel in advance, in another town!
A policeman came to the hotel. Maybe check if there were any snippers among us???
Then around 10 am, the hotel owner came to tell us that if we left within the next half hour and took the back roads,we  may be able to leave town. We jumped at the chance. By then our only thought was to make it to the border with Kyrgystan as soon as possible!
Using the awful backroads we made it out of town and into the ” motorway”. It was in a terrible condition! No  chance our VIP visitor was driving into town!
We wanted to avoid Tashkent and its crazy traffic, but there was no way to find our way round the trails and tracks.
Eventually ,as  we got closer to Tashkent, the weather turned terrible, very strong wind, massive clouds of sand, and then big storm. We completely missed the ring road and ended up riding toward the town centre.
We finally stopped at a car park, drenched and cold,  to try find where we were. A guy on a big 4×4 came to see us. We asked about the nearest hotel. He told us to follow him and he took  us to the local Asia tashkent. Expensive but by then we just wanted to get out of the storm and insane traffic.
Friday 30th May – 71 miles – Angren
We wanted to leave town early, in order to avoid the insane traffic…. But it was raining very heavily. We decided to wait a bit.
By midmorning, it was clear the heavy rain would last all day. We left. I can honestly say that i did not think i could make it out of Tashkent in one piece…. This is how crazy drivers are! They beat the brazilian… I never thought anyone could drive more dangerously than the brazilians, but the Uzbeks take dangerous driving to another level!
By 1 or 2pm we were totally wet, very cold and could not continue. We got into Angren. We bought some fuel ( we found a petrol station!!! And it had fuel!). We asked there for the nearest hotel and got there.
Afterc checking our marital tatus we were allowed to have one shared bedroom. They seem obsessed about my marrital status in the fergana valley! Very conservative muslim region.
The good news is that we were about 3 or 400km from the border. We could make it to the border in one day, weather permitting.
In the bar restaurant of the hotel, we heard talking spanish. And the russian menu was translated by hand into Spanish… What was going on? Dying of curiosity, i went to speak to a guy. It happens that a spanish company is helping building the road. The team were all spanish engineers, electricians.
For the last two days, they had been out of work as the construction site had totally run out of diesel, No machinery could be used! Crazy country!
Saturday 31st May – Andijan – ? Miles
Get to the border! Get to the border! The weather was very cloudy, but dry so far.
We set off early, but it was very slow going all morning due to endless road works and constants police and military checkpoints. The region is apparently a hotbed for fundamentalists and there have been bombing and stuff…. And you can google Andijan 2005 for details on the Andijan Massacre…. So sensitive area for the government.
On the plus side we crossed a beautiful mountain range.
By lunch time, in the outskirts of Qoqon we stopped for some food and drinks. It  was now sunny and very hot again. We got talking to teenage boys about studies and universities in the UK. They were very curious about us.
Since the mountain, Alistair’s bike, which has been doing a funny engine noise for some thousands ofmiles, was getting louder.
We set of nontheless. Get to the Border!!!
About an hour later, in the middle of nowhere, the noise became much worse…. The engine sounded like it was going to seize. Something was badly wrong and we had to stop. It was obvious we could not carry on.
Alistair turned to me and asked: ” What are we going to do? ” there was nothing and no one around for miles and miles….. 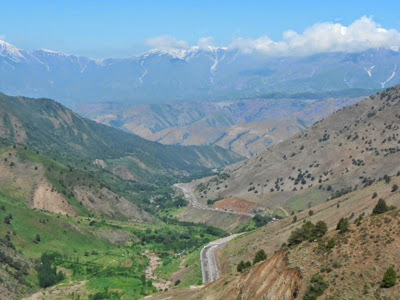