The rest of Friday was spent, for Alistair,  looking for a solution to the high altitude problems of his bike, and for me to catch up with the blog and photos.

The problem with a carburretor at altitude, is that the air is too thin, so the mix of air and fuel becomes too rich in fuel. The bike splutter and choke, eventually it would stop. So we need to reduce the intake of fuel. That means opening the carb and is complex.
So the idea was to find a fix, or that failing, go to Bishkek, the capital city, where he would be able to acces a workshop and find all he needs.
The highest mountains passes in Kyrgyz, until we reach Osh, will be about 3500m.
So if the bike does this it is enough, then in Osh there is a very good mechanic!
We also had a good walk in town. Lots of tourists around! We had not seen any tourists until then. We were surprised by the numbers! On the plus side it meant menus in English in cafes and restaurants, albeit at western prices!
Views from our hotel window: 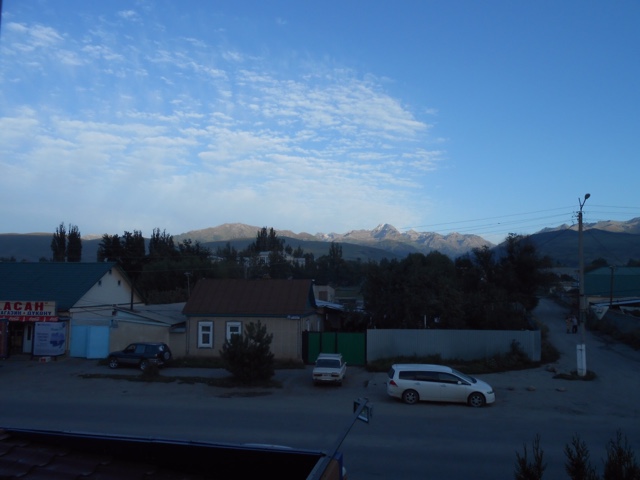 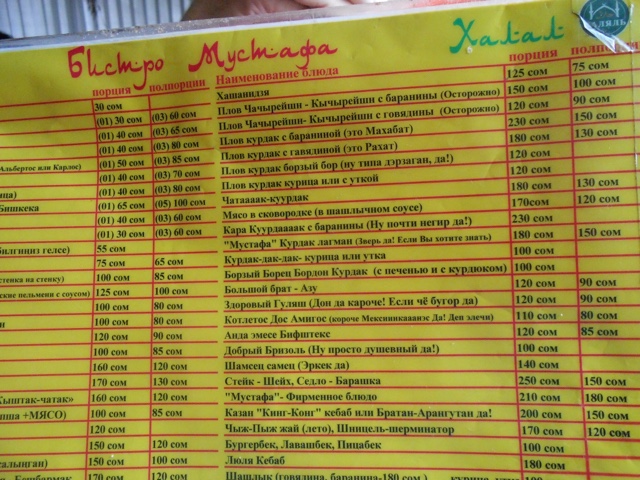 Day 56 – Saturday 6th August – Karakol – 0kms
After some research, Alistair decided against opening the carburretor, and try a small fix. That was to remove the plastic cover of the air filter, to allow more air, and to put a sieve, with lots of duct tape, to ensure no debris get in. Much more air should get in.
He found what he needed in the local bazar.
Here is how it looks: 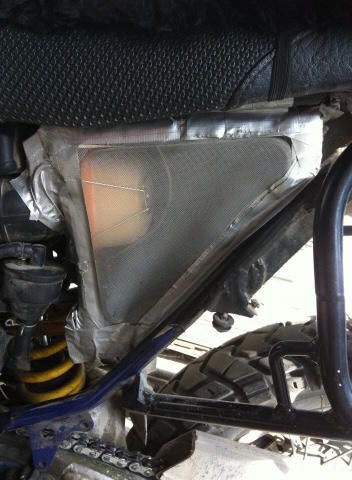 Views of Karakol and the bazar: 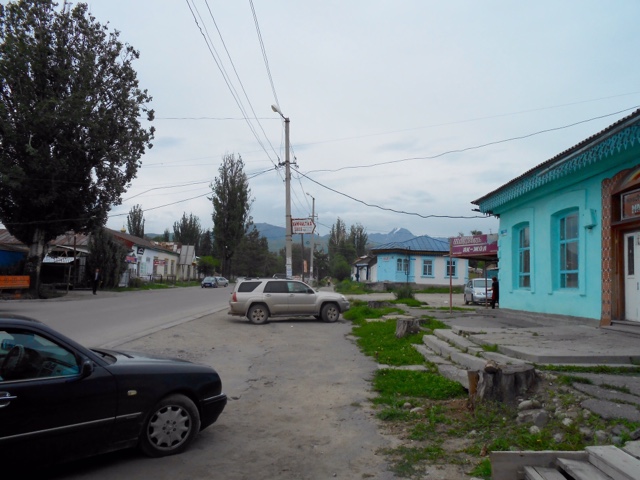 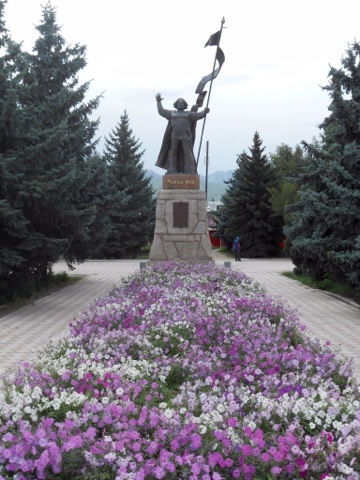 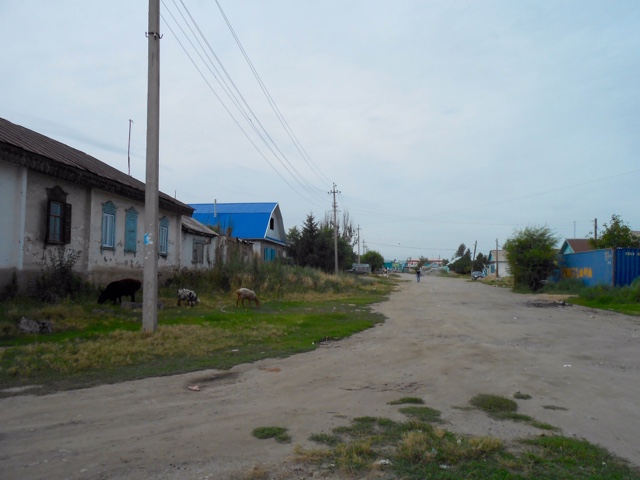 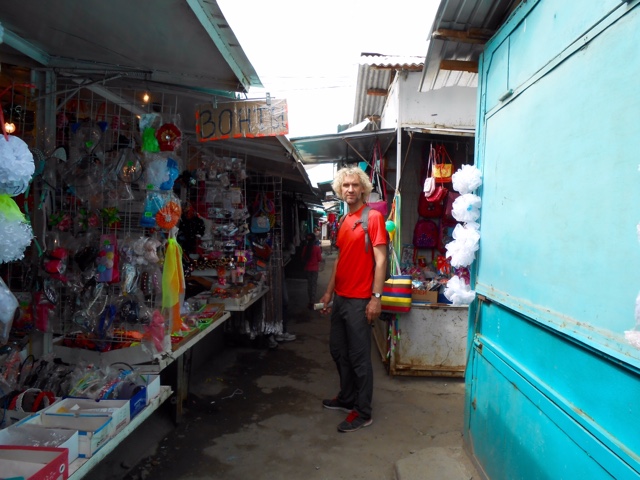 You must attention when  walking around or else! 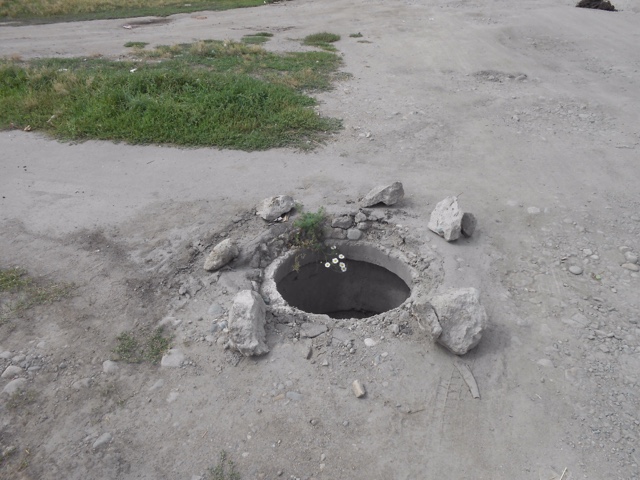 We visited some interesting sites: the ancient cathedral, built entirely in wood and without the use of any nails, and the local mosque. 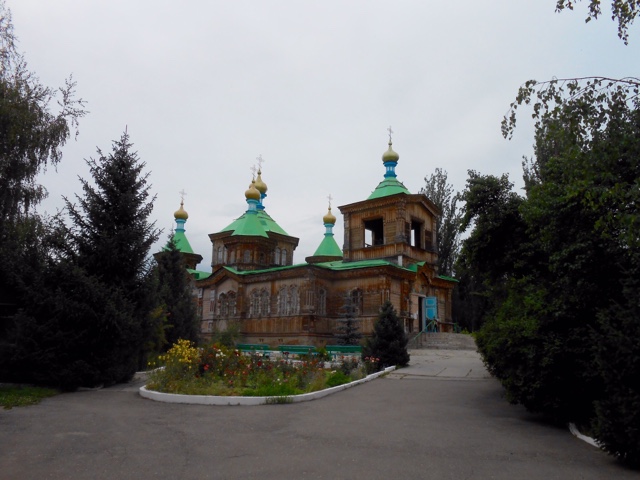 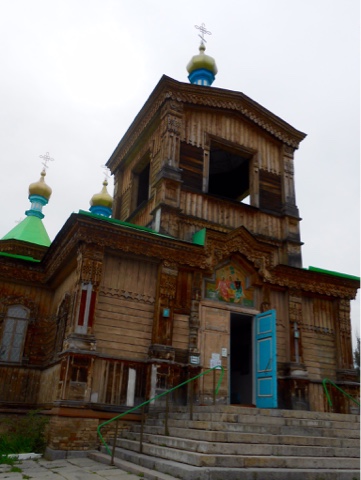 The mosque looks very Chinese, the architect was Chinese. 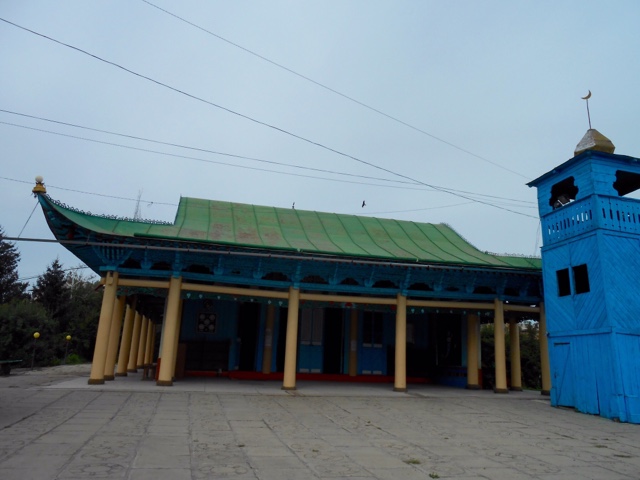 Despite the fact we could not go inside, and despite wearing long sleeve shirt and long trousers and boots, I was still made to wear this horror! 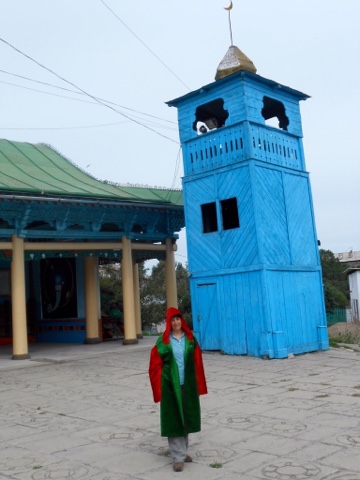 We then discovered the tourist cafe popular with the tourist and went for a pizza!
Day 57 – Sunday 7th August – Karakol – 150kms.
With Alistair fix in place, we decided to test his bike at altitude. There was a road east of Karakol that went up to a mountain pass. We rode it up to 3400m high. The TTR climbed! It was great. Mine, which is fuel injected, had no problem, as the FI system can sense the amount of air and regulate the flow of fuel.
We did not want to waste several days in Bishkek as we were running out of time to explore the Pamir Highway in Tajikistan. So that was great news!
Few photos of our ride: 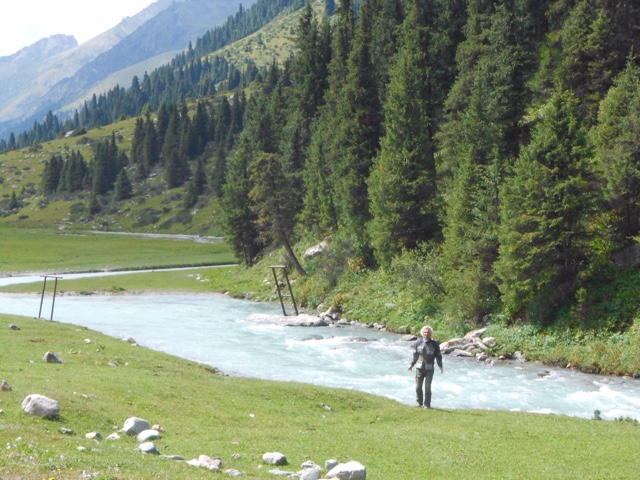 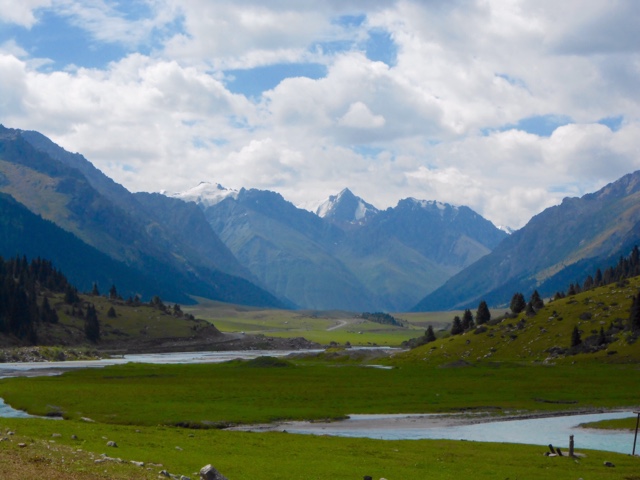 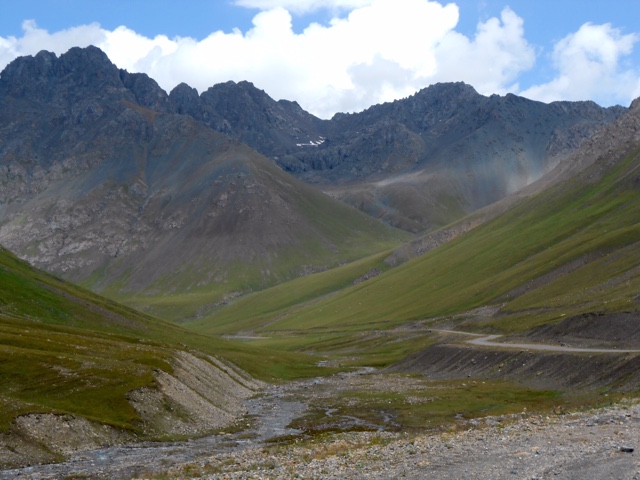 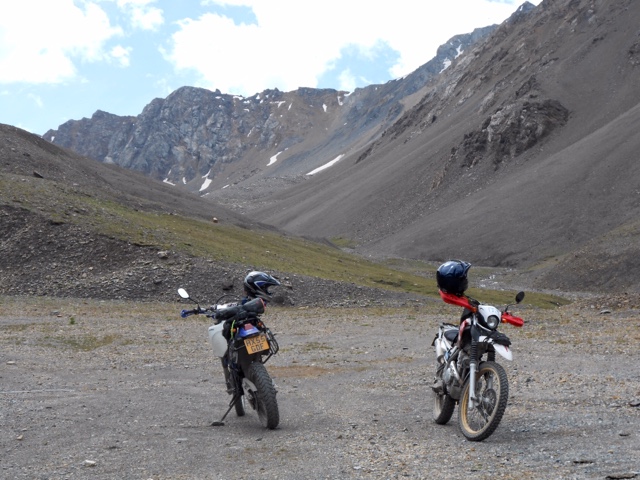 Still snow up there! 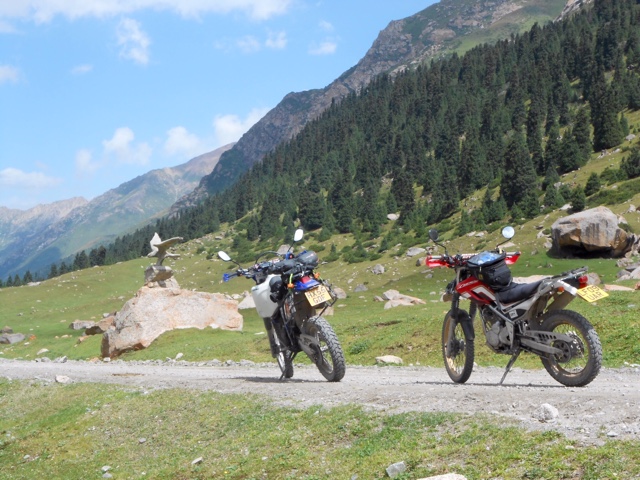 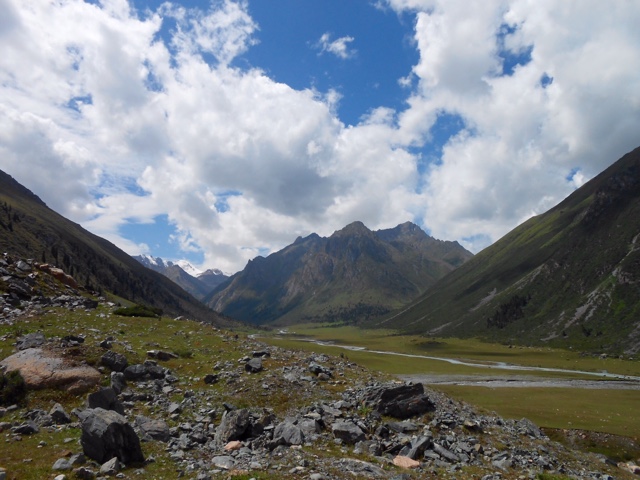 Talking of Tajikistan. Our other reason to go to Bishkek was to get the visas and GBAO permits ( permits to ride the GB autonomous oblast which covers part of the Pamir Highway).
However, Chris Sambor, in Warsaw , had told me that the Tajik government had now an online eVisa system. I tried with the iPad but did not work.
We decided to walk to an Internet cafe and put our applications using a real computer. Our applications were done. We just had to wait for a decision.
That done it was time for a Lagman! We did not need to go to Bishkek, more days to ride in the mountains and hopefully the Pamir! 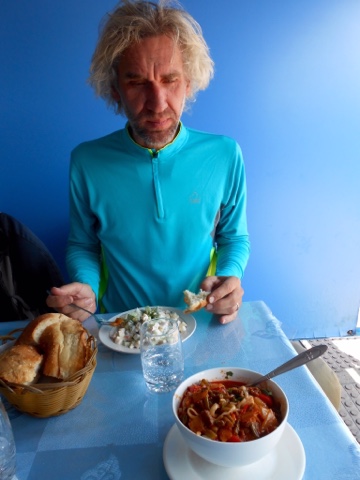 So we decided instead to ride the next day west and south, toward Kochkor, then Naryn, high in the mountains.
Day 58 – Monday 8th August – Kochkor – 250kms
Nice ride along the lake Issyk Kul.
On arrival at the village of Kochkor, we found a nice little hotel. They only had rooms with shared facilities but all clean.
The most important stuff was that the wifi worked well and we had news of our Tajik visa application! It was accepted! It was just a  piece of paper to print. We hope the border guards know about this new eVisas system!
I will publish photos of our ride later when I transfer them.
I leave you with horses. So many horses around! 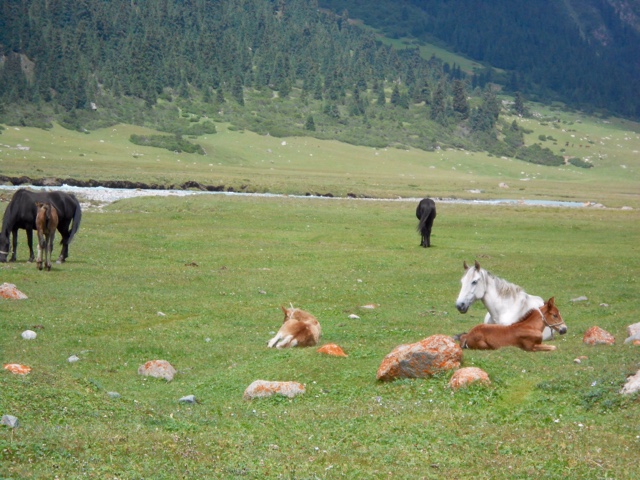